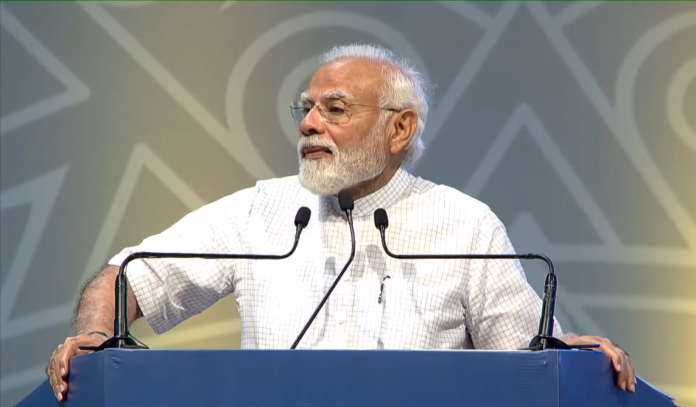 He interacted with Kisan drone pilots and witnessed open-air drone demonstrations in the drone exhibition centre.

Addressing the ceremony, PM Modi hailed the use of drone technology and emphasised its use in various fields.

“Technology has paved the way to ensure the last-mile delivery of govt schemes. Use of drones will increase in the defence sector & disaster management,” PM Modi said.

Prime Minister also suggested that he uses drone technology to conduct surprise inspection of various developmental projects across the country.

“I conduct surprise inspections of development work across the country with the help of drones,” PM Modi said.

In a veiled attack on Congress, Prime Minister Narendra Modi said that efforts were made to make technology “anti-poor” during the tenure of previous governments and added that his government has started implementing new mantras of good governance in India over the last eight years.

Lauding the enthusiasm that is being seen in India regarding drone technology, the Prime Minister said that India has the potential of becoming a global drone hub.

Addressing a gathering at India’s biggest drone festival in the national capital, he said, “During the tenure of earlier governments, technology was considered as part of the problem and efforts were made to make technology anti-poor. Due to this, there was an atmosphere of indifference regarding the use of technology in governance before 2014. The poor, deprived, middle class suffered the most.”

“Over the last 8 years, we have started implementing new mantras of good governance in India. Following the path of minimum government and maximum governance, we have made ease of living and ease of doing business a priority,” he said.

Appreciating the enthusiasm that is being seen in India regarding drone technology, the Prime Minister said that this energy is visible and it is a reflection of the quantum jump in the drone service and drone-based industry in India. “It shows the possibilities of an emerging large sector of employment generation in India. India has the potential of becoming a global drone hub,” he said.

Bharat Drone Mahotsav is a two-day event and is being held on May 27-28. Over 1,600 delegates comprising government officials, foreign diplomats, armed forces, central armed police forces, PSUs, private companies and drone startups etc will participate in the Mahotsav.

More than 70 exhibitors will display various use cases of drones at the exhibition. Mahotsav will also witness a virtual award of drone pilot certificates, product launches, panel discussions, flying demonstrations, display of a Made in India Drone Taxi prototype, among others.