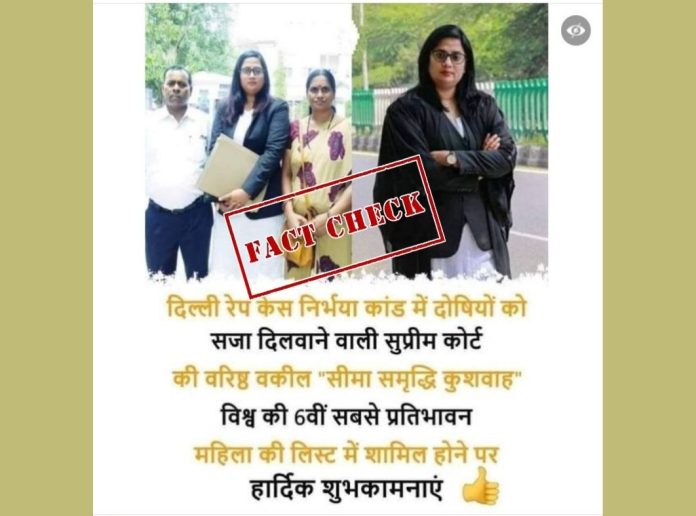 Recently, a claim is doing rounds on social media platforms that Supreme Court advocate, Seema Samridhi Kushwaha, who was the legal counsel for Delhi’s Nirbhaya case victim, has been featured in the list of ‘World’s Most Talented Women’ at the 6th place.

Several Facebook users are sharing the viral image. The text on the image in Hindi roughly translates to, “Congratulations to famous lawyer Seema Samriddhi Shukla for getting featured in the list of ‘world’s most talented women’ at 6th place. She got the guilty in Delhi’s Nirbhaya case convicted.” 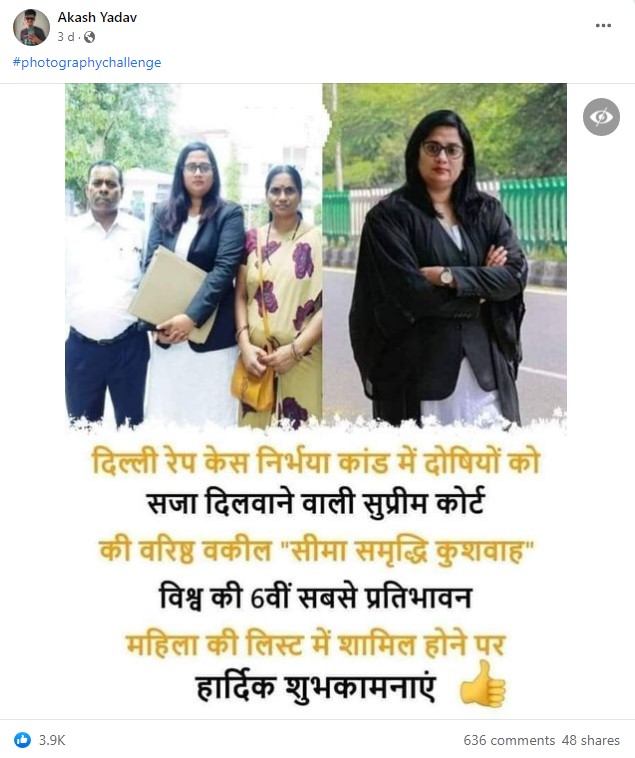 NewsMobile fact-checked the viral claim and found it to false.

On performing a relevant keyword search, we did not find any credible source that had any information about any list that features world’s most talented women.

Seema Samridhi Kushwaha is a Supreme Court lawyer and was the legal counsel for Delhi’s Nirbhaya case victim. She was also highly appreciated and gained prominence due to the case, but there is no information about her featuring in any purported list of talented women. More information about Seema can be found here.

We also scanned Seema‘s social media profiles but did not find any information related to the viral claim.

Notedly, TIME, BBC, and Forbes release such lists featuring the richest and most influential women in the world, every year. However, there is no information about any list that features ‘world’s most talented women’ which is released by any reputed institution.

According to reports, back in January 2022, Seema joined the Bahujan Samaj Party (BSP) ahead of Uttar Pradesh elections.

Therefore, with the above information, it can be concluded that the viral claim is false.