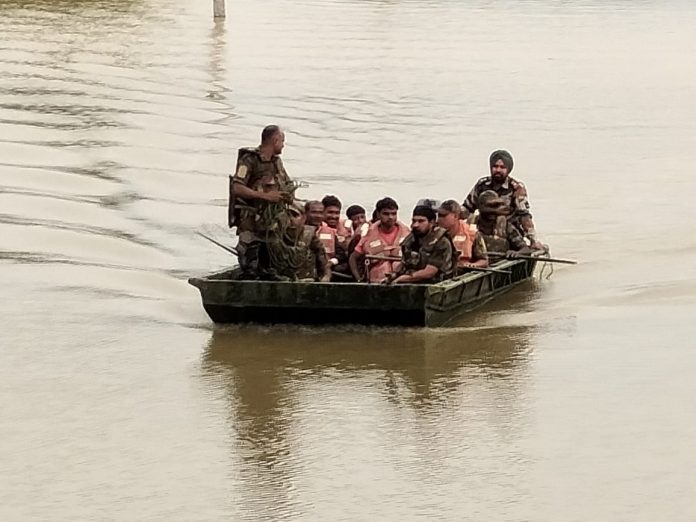 Guwahati: Indian Army has been called in rescue operations as the flood situation in Assam has worsened with more than 4.03 lakh people in 26 districts of the state have affected in the current spell of the flood.

Security forces comprising the Army and Assam Rifles of Masimpur Garrison on Tuesday launched flood rescue operations in various parts of Cachar district which is one of the badly flood-hit districts of the state.

Upon receipt of an urgent request from the Deputy Commissioner of Cachar district, swift and coordinated action was carried out by the Indian Army and Assam Rifles teams to rescue precious lives caught in the flood.

Guwahati-based Defence PRO said that priority was given to women, the elderly, and young children.

“The timely and swift action resulted in lives being saved and a major disaster is averted. A total of 500 villagers were rescued by both the parties of the Srikona Battalion of Assam Rifles and Army troops. Rescue efforts were ongoing till late evening and the DC and locals appreciated the service rendered by Assam Rifles and Army,” the Defence PRO said.

More than 4.03 lakh people in 26 districts of Assam have been affected by the current spell of the flood.

As many as 1,089 villages under 67 revenue circles are affected by this wave of flood and floodwaters submerged 32944.52 hectares of cropland.
One person has been reported as missing in the Kampur revenue circle in the Nagaon district.

The district administration has set up 89 relief camps and 89 distribution centers where 39558 flood-affected people are taking shelter.