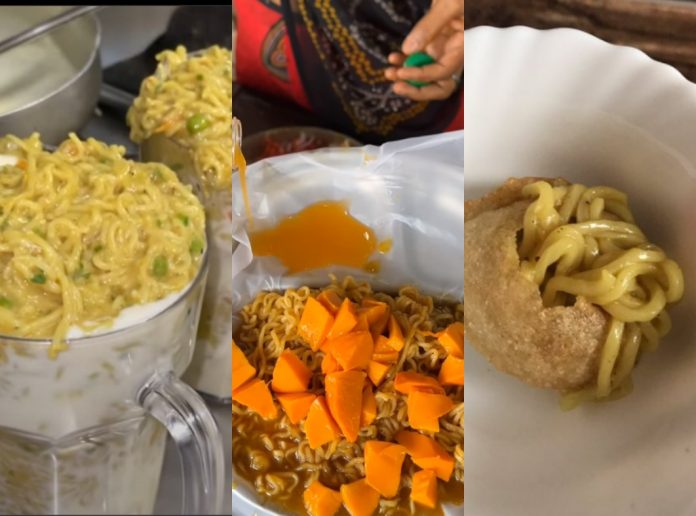 People are always experimenting with recipes, some experiments turn out good and are praised, while others become shocking and sometimes bizarre.

For most Indians, whether children or adults, Maggi is the comfort food. Adding vegetables, eggs, chicken, or cheese are some popular and favored combinations, but weird experimentation with Maggi is rare.

The internet has seen it all, from mango to milkshake, and it’s hard to digest for social media.

In a video shared by ‘The Great Indian Foodie’ on Instagram, a woman is seen making Maggi adding Mango juice to the pan. But what happens next has everyone on the internet worried. She served the cooked noodles with mango slices on top and juice on the side.

The video left a cringy bad taste in the mouth of many netizens.

While it is unclear who invented the bizarre dish, a photo of two milkshake glasses topped with a scoop of cooked Maggi (with peas) has been extensively shared on social media.

The tweet with almost 2,000 likes, immediately caught the eyes of several people, leading to a flood of replies on social media.

While food experimentation might be strange at times, Maggi fans were plainly against the dish being used as a topping.

You heard it right! A restaurant in Delhi created a new dish of bizarre combination involving Maggi in the jug of beer.

Netizens were expected to figure out why the two incredible products were being combined. However, it was eventually discovered that it was only froth and Maggie broth.

Someone just added Oreo and ice-cream to their Maggi. The internet was simply disgusted with this fusion when the video went viral.

The video goes on to fold the Oreo in the Maggi and then tops it off with some chocolate ice-cream. The caption says “Too weird or worth a try?.” Definitely bizarre.

Laddoo with Maggi seems unbelievable but the chef just did it. Made with jaggery, cardamom, and butter, topped with cashew has left all horrified.

A food stall in Ghaziabad is selling Maggi cooked in Fanta.

In a video shared on YouTube by food blogger ‘Foodie Incarnate,’ the street chef is seen sautéing onions, capsicum, green chilies, and tomato before adding a generous dose of Fanta to the pan to cook the Maggi.

Maggi and paani puri are probably two of the most loved dishes for any Indians BUT separately.

In a video posted on Twitter, a person is seen swapping the usual potato filling with Maggi, even seen adding the spicy mint water before serving the dish. The combination left netizens confused about why this was created in the first place.

Dealing mid week crisis with Maggi Pani Puri…Hope it helps you all too🥶🥶🥶 pic.twitter.com/qrWJ7IsQkM