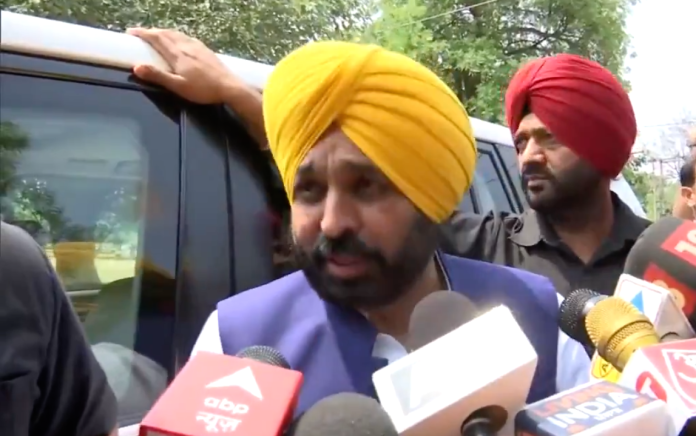 Mohali: Amid the blast outside the Intelligence Department building of Punjab Police in Mohali on Monday night, Punjab Chief Minister Bhagwant Mann assured that ‘those who are trying to ruin Punjab’s atmosphere won’t be spared.

Meanwhile, following the meeting with the DGP and other senior officials, CM Mann has sought a report from DGP and other intelligence officers.

#WATCH | Those who are trying to ruin Punjab’s atmosphere won’t be spared. I sought a report from DGP and other intelligence officers (over last night’s explosion in Mohali)…Strict punishment will be given. Things will be more clear by evening. Probe on: Punjab CM #BhagwantMann pic.twitter.com/d2fPFdgCHO

“Strict punishment will be given. Things will be more clear by evening. Probe on,” Bhagwant Mann added.

Meanwhile, FIR has been lodged in connection with the incident.

In the FIR, unknown persons have been booked under Section 307 (Attempt to murder) of the Indian Penal Code, Section 16 ((Punishment for a terrorist act) of UAPA and Section 3 of the Explosive Substances Act (Punishment for causing an explosion likely to endanger life or property).

Earlier, Chief Minister tweeted “Police are investigating the blast in Mohali. Whoever tried to spoil the atmosphere of our Punjab will not be spared.”

Reportedly, an RPG (Rocket Propelled-Grenade) was thrown from the streets which shattered the glasses of Punjab Police Headquarters on Monday night.

Ravinder Pal Singh, Mohali Police SP (HQ) refused to rule out the angle of a suspected terrorist attack saying that “it can’t be ignored and we are investigating it.”

He further added that “It is a minor blast. The attack happened from outside the building. It has been done with rocket-type fire. No casualty or loss happened. Our senior officers and FSL team are investigating it.”

Former Chief Minister of Punjab Captain Amarinder Singh in a tweet said: “Shocked to hear about the blast at the Punjab Police Intelligence headquarter in Mohali. Thankfully nobody was hurt.”

He further expressed concern over the “brazen attack on the police force” and urged the Chief Minister to ensure that “perpetrators are bought to justice at the earliest.”

Meanwhile, Delhi Chief Minister, Arvind Kejriwal also reacted to the incident and said: “Mohali blast is a cowardly act of those who want to disturb the peace of Punjab. Aam Aadmi Party’s Punjab government will not allow those people’s wishes to be fulfilled.”

He further added that “Peace will be maintained under all circumstances with the cooperation of all the people of Punjab and the culprits will be punished severely.”