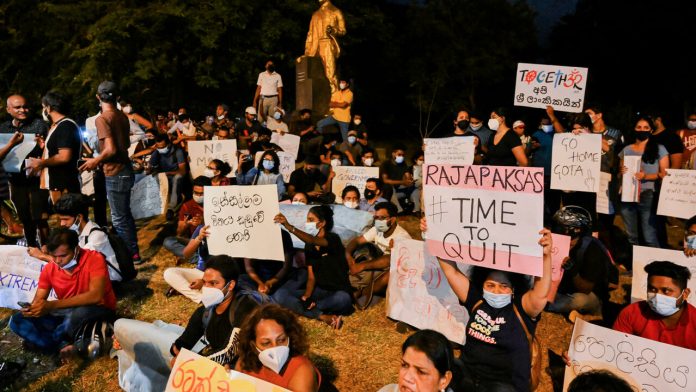 Colombo: Amid the massive economic crisis, Sri Lanka’s President Gotabaya Rajapaksa has declared a state of emergency from midnight following the protests.

A spokesperson of the president said he invoked the tough laws to ‘ensure public order’ after shops closed and public transport was halted Friday by unions blaming him for the unprecedented economic crisis, which has ignited weeks of unrest.

Earlier, President in a special meeting requested Prime Minister Mahinda Rajapaksa to step down from his power as a solution to the ongoing political crisis in the country.

Reportedly, in a special meeting between President and the cabinet ministers, PM Rajapaksa said that if the new government will solve the economic crisis and could bring an immediate solution, then he would give his blessing to the new government.

However, there is yet to be an official response on whether Mahinda Rajapaksa will tender his resignation or not.

Meanwhile, over 2,000 trade unions participated in Friday’s nationwide hartal and strike against the President, Prime Minister, and the government, Colombo Page reported.

Sri Lanka is struggling with acute food and electricity shortages, forcing the country to seek help from its neighbours. The recession is attributed to foreign exchange shortages caused by a clampdown on tourism during the COVID-19 pandemic. The country is unable to buy sufficient fuel and gas, while the people are being deprived of basic amenities as well.

The economic situation has led to huge protests with demands for the resignation of Prime Minister Mahinda Rajapaksa and President Gotabaya Rajapaksa.