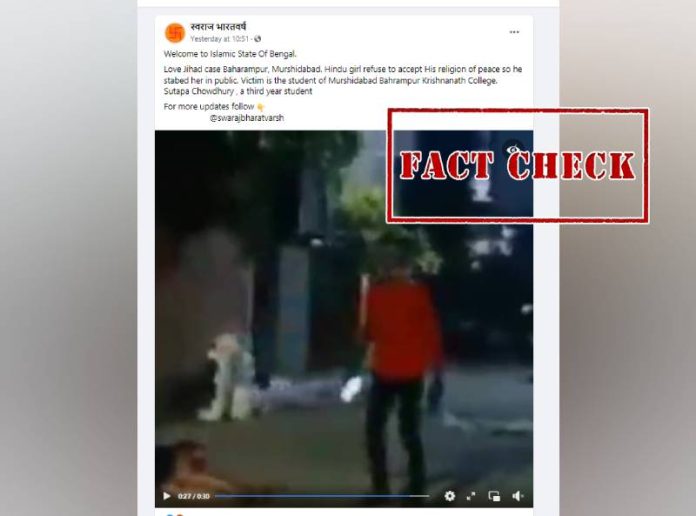 A video of a woman being stabbed by a man is being widely shared on social media with a caption claiming that a man from the minority community stabbed the girl in West Bengal’s Murshidabad as she refused to convert to Islam.

The video is being shared with a caption that reads, “Welcome to Islamic State Of Bengal. Love Jihad case Baharampur, Murshidabad. Hindu girl refuse to accept His religion of peace so he stabed her in public. Victim is the student of Murshidabad Bahrampur Krishnanath College. Sutapa Chowdhury, a third year student.” 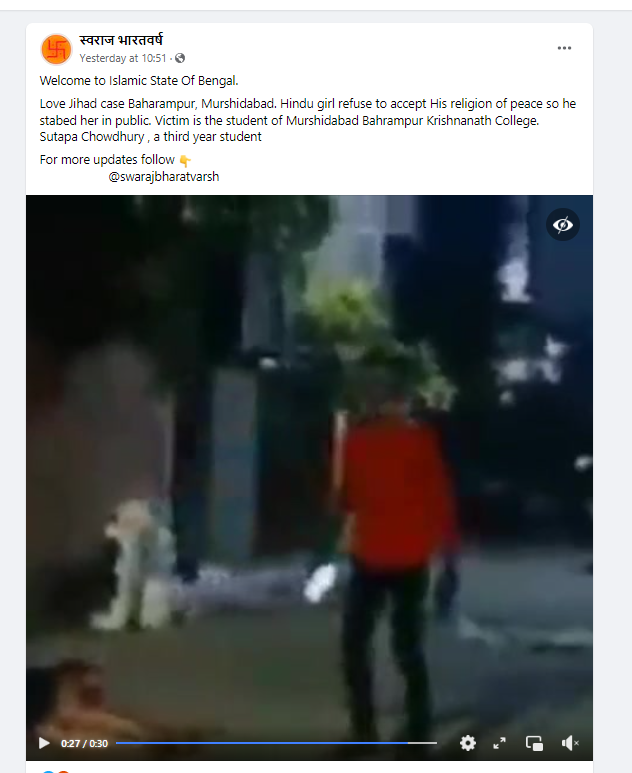 On doing a Google Reverse Image Search, we found the same video was uploaded by Republic World on May 3, 2022. The video was shared with a title that read, “West Bengal News: 21-Year-old Brutally Murdered in Berhampore; Shocking Video of Attack Emerges.” 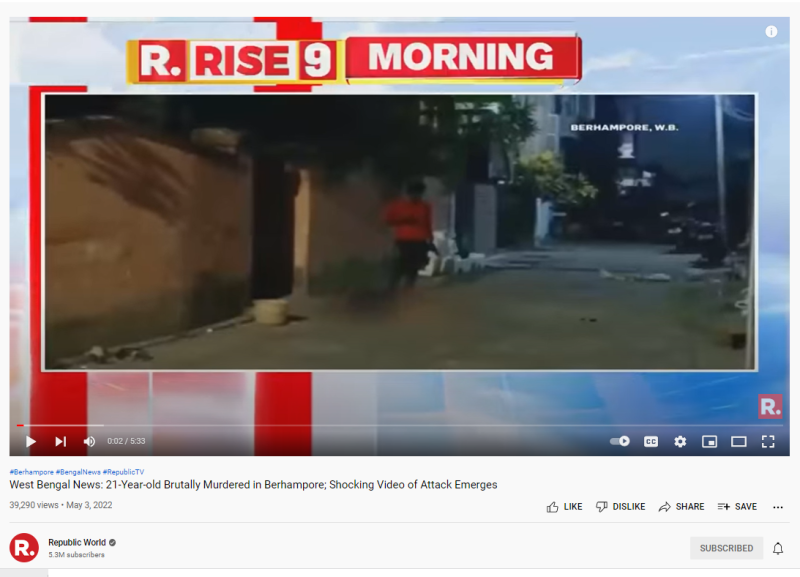 On further searching with appropriate keywords we found a report by Hindustan Times published on May 3, 2022. According to the report, “A 20-year-old woman was hacked to death by a young man in front of a women’s hostel at Berhampore in Murshidabad district. The victim has been identified as Sutapa Chowdhury, a college student. Police have arrested the assailant Susanta Chowdhury, 22.” The report also quoted KS Rajkumar, superintendent of police of Murshidabad, who said, “Preliminary investigations revealed that the youth had an affair with the girl. But later the girl walked out of the relationship and came to Berhampore for her studies.”

An Indian Express report suggests that the accused was a 22-year-old man identified as Sushanta Chowdhury of Malda district. The accused was arrested while he was trying to flee to Malda in a truck. The report also quotes Murshidabad SP K Sabri Raj Kumar, who said, “The arrested accused has confessed. Preliminary investigation indicates that the accused had been in a relationship with the victim. However, she ended the relationship and moved to Behrampore for studies. Several issues cropped up between them thereafter and efforts were made to resolve these with the help of local politicians. The accused was carrying a knife and a dummy gun.”

We further found that Murshidabad Police had also tweeted the name of the accused mentioning that legal action will be taken against anyone who is trying to spread a false rumour. However, later the Tweet was deleted.

Another Tweet by Murshidabad Police read, “Two FIRs have been initiated against rumour mongers.”

Based on the above incidences we can ascertain that the viral post is Misleading.