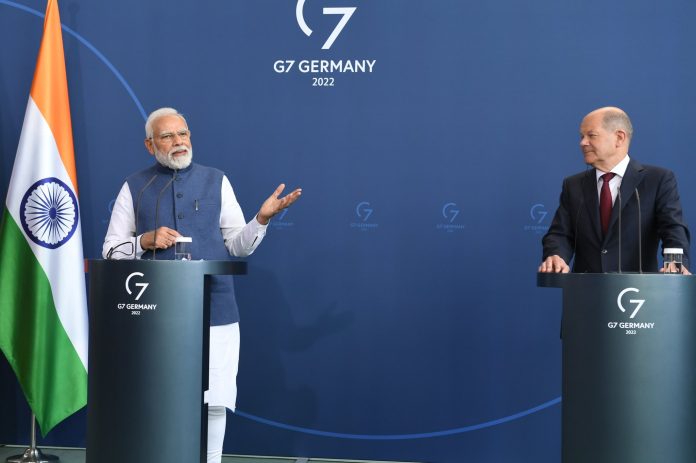 Berlin: As the war in Ukraine prolonged for over two months, Prime Minister Narendra Modi during his visit to Germany on Monday said no country could emerge victorious in the ongoing conflict between Russia and Ukraine.

PM Modi further lauded India’s emphasis on peace and appealed for an end to the war.

Modi and German Chancellor Olaf Scholz addressed the media jointly after the Indo-German governmental consultations (IGC) at the Chancellery in Berlin.

Scholz, who invited Modi for the upcoming G-7 summit in Germany, said Russia had violated the UN charter by attacking Ukraine.

“India is among our very important partners here. The world can only develop well if we are clear as to the fact that futue relations in the world will be characterised and marked by many countries, not by a few powerful countries,” Scholz said.

He said India was committed to quick progress in free trade agreement negotiations with the European Union.

The Prime Minister earlier received a guard of honour at Federal Chancellery in Berlin on Monday in the presence of the German Chancellor.

PM Modi, who arrived in Germany on the first leg of his three-day Europe visit, got a rousing welcome from the Indian diaspora in Berlin.