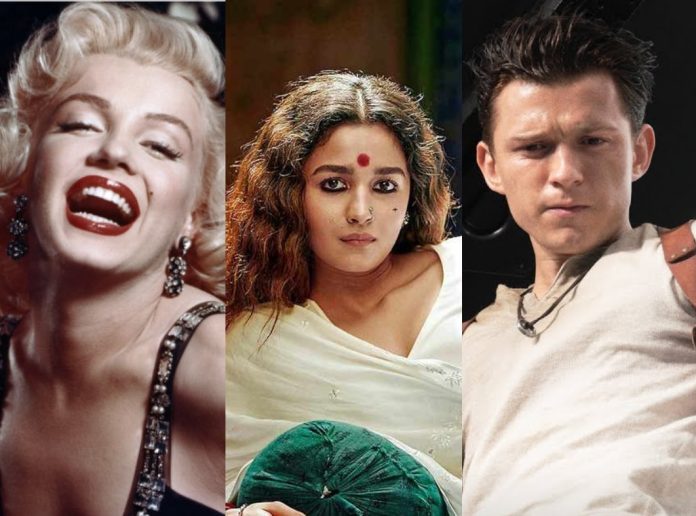 It’s the last weekend of the month! Probably a chill-binge time for some of us, here are some fresh releases for this weekend for you to enjoy with your loved ones in the comfort of your home. From Alia Bhatt’s Gangubai Kathiawadi to Tom Holland’s Uncharted, there’s something for everyone on OTT platforms this weekend.

Sanjay Leela Bhansali’s Gangubai Kathiawadi stars Alia Bhatt as Gangubai Kathiawadi and Ajay Devgn, Seema Pahwa, Vijay Raaz and Shantanu Maheshwari in pivotal roles. It is a story of a prominent brothel proprietor who reclaims her honour by winning municipal elections while pushing for equal rights for women and sex workers. The film is said to be based on a true story.
Watch Gangubai Kathiyawadi on Netflix, released on 26th April.

Based on the famous video game, the action-adventure film This film, directed by Ruben Fleischer, follows Nathan Drake and his partner Victor ‘Sully’ Sullivan in their search for the greatest treasure ever discovered, as well as the trail of evidence that might lead to Nathan’s long-lost brother. Tom Holland, Antonio Banderas, Mark Wahlberg, Tati Gabrielle, Steven Waddington, Sophia Taylor Ali, and Tiernan Jones all play significant parts in the film.
Watch Uncharted on BookMyShow, released on 27th April.


The Mystery of Marilyn Monroe: The Unheard Tapes

The documentary film, directed by Emma Cooper, delves into the mystery circumstances investigation into the death of Hollywood actress Marilyn Monroe via previously unseen interviews. the documentary brings back these audio clips of private conversations to trace Monroe’s story.
Watch The Mystery of Marilyn Monroe: The Unheard Tapes on Netflix, released on 27th April.

Season 4 of Ozark is now online, and the storyline is as engrossing as ever. The Byrde family,  when they escaped to the Missouri Ozarks;
Marty Byrde is still on the run from the cartel in the new season. Wendy, his wife, is compelled to take drastic steps to rescue the family, causing tensions in the process.