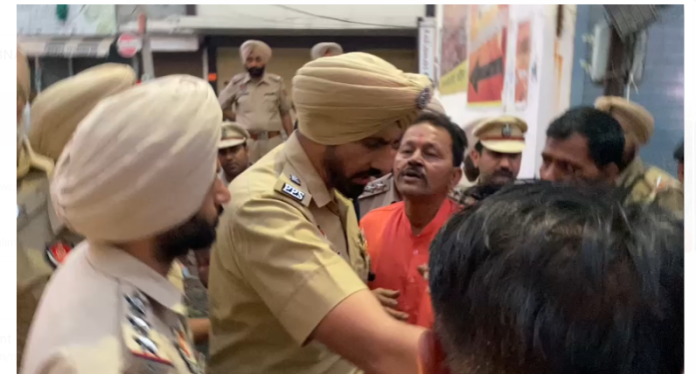 Patiala: Expelled Shiv Sena leader Harish Singla has been arrested in connection with the clash in Punjab’s Patiala which broke out on Friday between two groups.

The arrest was made after a high-level meeting chaired by Punjab Chief Minister, Bhagwant Mann. Meanwhile, taking account of the situation, a curfew has been imposed in the area till April 30.

A clash between two groups near Kali Mata Temple on Friday led to a situation of tension in the area. Stones were being hurled and swords were brandished during the clash.

According to reports, one police officer and two people were injured during the clash between the two groups.

Harish Singhla, President of Punjab Shiv Sena was leading a march without appropriate permission. The situation turned violent when a group of radical Sikhs came out in large numbers to stop the procession by Shiv Sena.

“Seeing the problem of law and order here, police have been deployed. We are speaking with Shiv Sena’s chief Harish Singhla as they don’t have any permission for the march,” Mohit Malhotra, DSP said.

Chief Minister of Punjab Bhagwant Singh Mann tweeted “the incident of clashes in Patiala is deeply unfortunate. I spoke with the DGP, (and) peace has been restored in the area. We are closely monitoring the situation and won’t let anyone create disturbance in the state.”