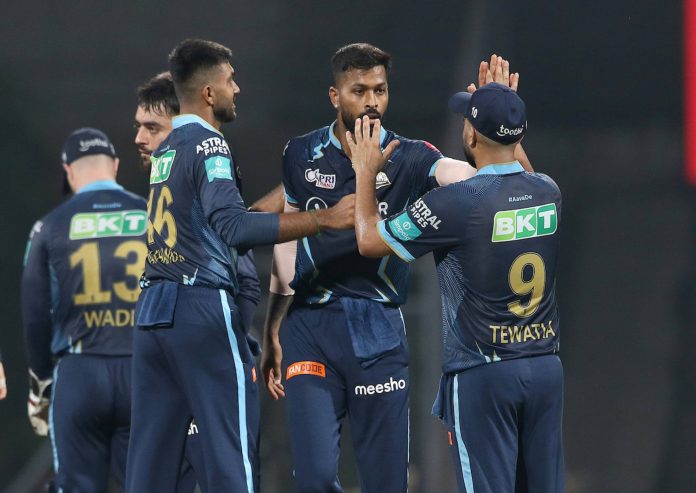 Skipper Hardik Pandya’s unbeaten knock of 87 was backed by a spirited performance of bowlers as Gujarat Titans defeated Rajasthan Royals by 37 runs in their IPL 2022 match here at Dr DY Patil Sports Academy on Thursday.

Debutants Gujarat Titans’ fourth victory in the five matches has taken them to the top of the Indian Premier League 2022 table while for Rajasthan Royals’ this is their second loss in the league as they fall to the third spot. Hardik Pandya’s captain knock was well accompanied by Abhinav Manohar’s 43 as the duo stitched an 86-run partnership to guide Gujarat Titans to a challenging target of 192/4. For RR, Kuldeep Sen, Yuzvendra Chahal and Riyan Parag bagged one wicket each.

Jos Buttler’s quick knock of 54 went in vain for RR while for GT, Lockie Ferguson and debutant Yash Dayal were the picks among the bowlers. The pace duo scalped three wickets each. GT skipper Hardik also scalped a wicket and forced a run-out.

Chasing 193, Rajasthan Royals enjoyed a fast start in the innings as they scored 65 runs in the first powerplay but lost 3 wickets in that period. Two of those wickets came in the sixth over.

Jos Buttler who is red-hot form smashed 24 runs off the first two overs but his fellow opener Devdutt Padikkal wasn’t able to impress as he was removed by debutant Yash Dayal for a golden duck in the 2nd over. In the 4th over, the English opener went ballistic again as he thrashed Yash Dayal for 18 runs.

The Indian all-rounder Ravichandran Ashwin who came to bat at no. 3 was removed by Lockie Ferguson in the last over of the powerplay. In the same over, Buttler smashed Lockie for a six to bring his fifty but it was the Kiwi pacer who had the last laugh as he castled Buttler’s stumps with a sensational slow yorker on the off stump on the last ball of the over.
The Gujarat skipper Hardik then got the better of his counterpart as he ran out Sanju Samson through a brilliant direct over in the 8th over off Lockie Ferguson. Yash Dayal put more misery on the ailing RR side in the 11th over as Rassie van der Dussen edged to Matthew Wade behind the stumps.

The dangerous-looking West Indian Shimron Hetmyer was removed by Mohammad Shami in the 13th over as the wickets kept falling for RR at regular intervals. By the end of the match, Lockie and Yash grabbed three wickets each while Hardik Pandya also joined the party with a wicket in the 18th over. The chasing team in the end came 37 runs short.
Earlier, put in to bat first, Gujarat Titans openers Shubman Gill and Matthew Wade got a positive start as they gathered 12 runs in the opening over, but the duo could not be on the crease for long as Wade was run out by Rassie van der Dussen.

Kuldeep Sen was introduced into the attack and he dismissed Vijay Shankar for two runs. GT lost their two important wickets in the first powerplay of the innings leaving the team’s total at 16/2. Captain Hardik Pandya walked in to bat with Gill to take his team’s total to 53/2 in 6.3 overs but the emerging partnership was broken as Riyan Parag dismissed Shubman Gill for 13 runs.

Abhinav Manohar came to the crease and tried to anchor with Pandya as they hammered RR bowlers all around the ground. The duo also struck a much-needed partnership of 48 runs and took their team’s score beyond 100-mark in the 13th over.

In the 14th over of the innings, Pandya notched up a second consecutive half-century which he made in 35 balls. Gujarat Titans skipper smashed two successive sixes on Ravichandran Ashwin’s delivery which put RR under great pressure. The partnership of 86 runs was broken as Manohar was caught by Ashwin on Yuzvendra Chahal’s delivery, after scoring only 43 runs, leaving the team’s total at 139/4 in the 16th over.

The new batter David Miller walked in to bat with the captain to keep the scoreboard moving. Pandya along with Miller took his team’s total to 192/4 in the first innings as they gathered 13 runs in the last over.