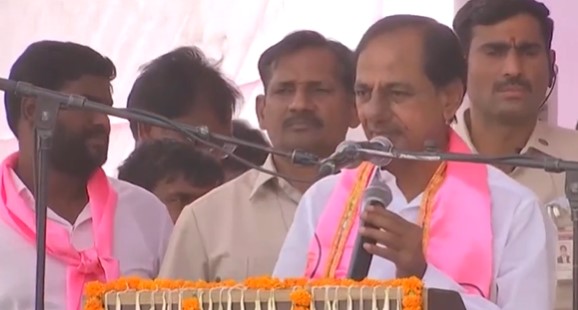 New Delhi: Telangana Chief Minister K Chandrashekar Rao held a protest at the Telangana Bhavan in the national capital on Monday over the ‘one nation one procurement policy’ warning Prime Minister Narendra Modi over its procurement policy and saying that they would ‘go after the government’ if the crops are not procured uniformly.

In his address, he said that “I request Prime Minister Narendra Modi and Piyush Goyal to procure crops uniformly across the country including Telangana. We will wait for the next 24 hours after that we will make a decision and will go after you.”

The protest was spiked by the Telangana Rashtra Samithi (TRS) after the reports of the central government allegedly refusing to buy paddy from the state. Farmer leader Rakesh Tikait was also present on the stage.

Telangana CM while speaking at the protest said that “Is it a fault to grow paddy? I want to warn Prime Minister Narendra Modi to not play with the farmers’ sentiments. Indian history is a testament to the fact that whenever a farmer cries, the government loses.”

He further added that “No one is permanent in power. Don’t treat farmers of different states unfairly.”

The fresh challenge imposed by CM K Chandrashekar Rao comes months after the central government backed down on the farm bills introduced by the government which led to nationwide protests and agitations.

In his address to the public, he further added that “Telangana demands its rights, I would like to urge the Prime Minister to frame a new policy and we will contribute to it. If not then you will be removed and the new government will make a new integrated policy.” The protest was joined by the party-working president, MLAs, MPs, MLCs, and Ministers.

Earlier in March, Union Minister for Consumer Affairs, Food and Public Distribution Piyush Goyal assured the farmers of Telangana that there is absolutely no discrimination between the farmers of different states. He further added that some leaders in Telangana are misleading the farmers.