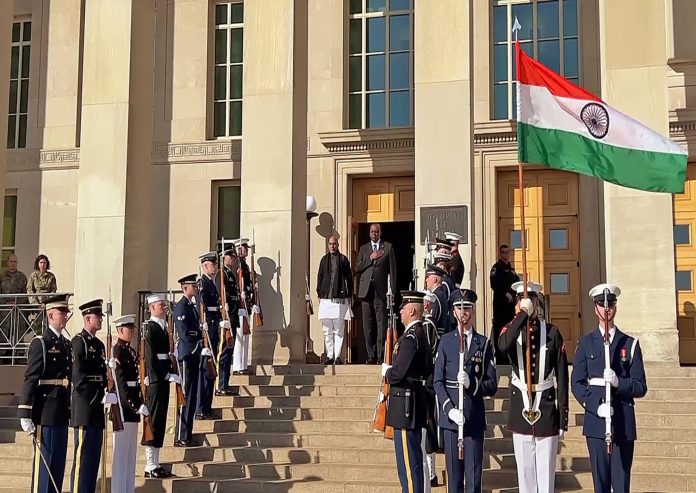 US Secretary of Defence Lloyd Austin on Monday welcomed Defence Minister Rajnath Singh in an enhanced honour cordon ceremony at the Pentagon, Washington.

Rajnath who is on a five day US visit, which includes the India-US 2+2 ministerial dialogue, arrived at the Pentagon for a bilateral meeting with US Defence Secretary Austin. The defence minister and external affairs minister S Jaishankar arrived in Washington on Sunday for the fourth edition of the annual dialogue with their US counterparts.

The “2+2” comes amidst heightened tensions between Russia and Ukraine and incidentally, the United Nations Security Council will be holding a meeting on Ukraine today.

According to the schedule released by US State Department Blinken will meet with Jaishankar at the Department of State at 9:00 a.m (local time).

Post that Blinken, Austin, Jaishankar and Rajnath Singh will participate in the U.S.-India 2+2 Ministerial Dialogue at the Department of State.

Following that Blinken, Austin, Jaishankar, and Rajnath Singh will attend a signing ceremony of the Space Situational Awareness Memorandum of Understanding, which refers to the knowledge of the space environment, including the location and function of space objects and space weather phenomena.

The last 2+2 Ministerial Dialogue between the two countries was held in October 2020 in New Delhi. India and the United States held a bilateral 2+2 inter-sessional meeting in September last year in Washington and exchanged assessments on developments in South Asia, the Indo-Pacific region and the Western Indian Ocean.