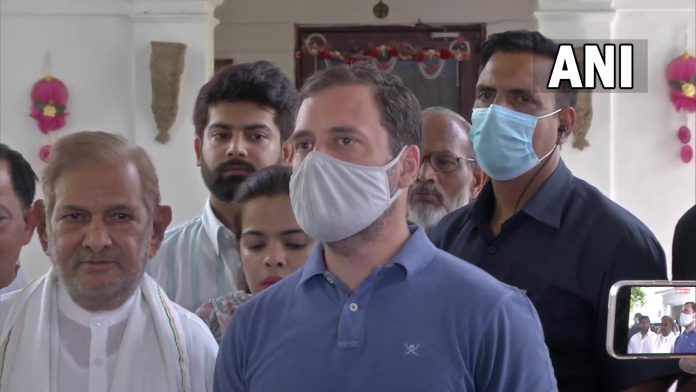 After meeting veteran leader and former Union Minister Sharad Yadav at his residence to inquire about his health, Rahul Gandhi declared Sharad Yadav a political Guru.

When the media asked Sharad Yadav should Rahul Gandhi be made party chief, Yadav said, “Why not? If somebody runs Congress round the clock, it is Rahul Gandhi. I think he should be made the party president. Only then can something big be done.”

He further targeted the BJP government for spreading hatred and dividing the country.

“I agree with what he (Sharad Yadav) said today that the country is in a very bad situation. Hatred is being spread and the country is being divided. We’ve to bring the nation together and once walk on the path of the brotherhood which has been a part of our history,” he said.

The Wayanad MP further alleged that in the last two-three years, media institutions, BJP leaders, RSS ‘have hidden the truth’.

Slamming the BJP-led Central government and its economic policy, the Congress leader said, “You can’t imagine India’s economic situation and job condition. Never in your life, you would have seen what is coming next. The employment structure of this country, the backbone is broken. Small and medium business, small shopkeepers, the informal sector is our backbone.”

“Economists and bureaucrats make their plans by looking at other nations. Prime Minister says we have to become like them. It can’t be done like that. First, we have to realize who we are and what’s happening here. They have broken the backbone, terrifying results would come in next three-four years,” said Gandhi further attacking the BJP government at the Centre.

Indirectly attacking the Centre over its position on China, the Congress leader said, “Just like Russia not recognising Donetsk, Luhuansk in the same way China is not ready to recognise Ladakh and Arunachal.”
“Russia says that they don’t accept the territoriality of Ukraine, they don’t consider the Donetsk and Luhansk regions parts of Ukraine. Russia attacked Ukraine on that basis. What is the aim? Break the alliance of NATO-Ukraine-US,” said the Congress leader.

“The government is ignoring this. But we have a model (Russia-Ukraine). That model can be applied here too,” he said.

“The government is not accepting reality. I am telling them to accept the reality because if they don’t do it and don’t prepare themselves, they won’t be able to react when the situation worsens,” added the Congress leader.