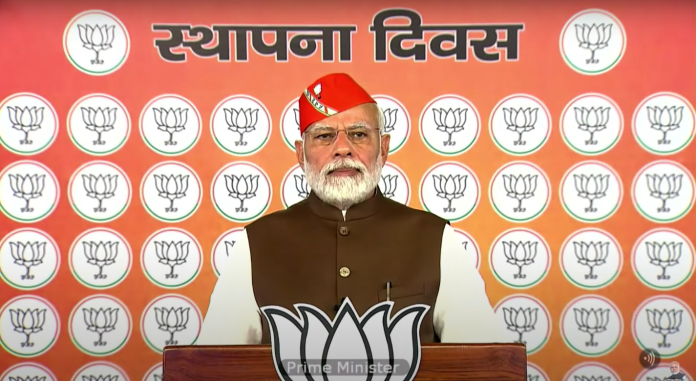 New Delhi: Taking a jibe at Opposition parties, Prime Minister Narendra Modi on Wednesday said that some political parties did only vote bank politics and have harmed the country in the past decades through dynastic politics while assuring that the BJP will continue its fight to defeat ‘anti-democratic’ forces in the country.

Addressing BJP workers on the party’s 42nd Foundation Day, PM Modi said, “In our country, for decades, some political parties did only vote bank politics and made promises to only a few people, keeping most of the people starving. Discrimination, corruption, all these were side effects of vote bank politics. The BJP has not only given competition to this vote bank politics, but it has also been successful in explaining its disadvantages to the countrymen.”

He further said, “For us, politics and national policy go hand in hand. But it is also true that there are still two types of politics going on in the country- one of love for family, other of love for the nation. There are some political parties in different states that work only for the interests of their respective families. They might be in different states but they’re linked through dynasty.”

“This has harmed the country a lot in the past decades. These parties didn’t let the youth of the country to progress and always betrayed them. Today, we should be proud that BJP is the only party that is making the country aware of this challenge, warning the country about it (dynastic politics),” said the Prime Minister.

Assuring the workers of continuing the flight till the objective is achieved, he said, “The BJP will continue to fight for the establishment of democratic values in such states. This great struggle will continue till we defeat the anti-democratic forces.”

Stating that the government is working while keeping the national interest paramount, the Prime Minister said that today the country has decision-making power as well as determination-power and therefore, “today we are setting goals, we are also fulfilling them”.

The Prime Minister also noted that recently, the country accomplished the target of exporting products worth USD 400 billion i.e. Rs 30 lakh crore and said that achieving such a big target during the COVID-19 pandemic shows the country’s capability.

“Over the years, the country has seen that making life easier for its citizens has been the priority of the BJP governments, the double engine government. From pucca house to the construction of toilets, from Ayushman Yojana to Ujjwala, from water to every household to bank accounts for the poor,” said the Prime Minister.

Announcing that the BJP is going to start ‘Samajik Nyay Pakhwada’ from today, the Prime Minister urged all the party workers to actively join the campaign and make the countrymen aware of the schemes that the government is running for the poor.

The BJP is celebrating its 42nd foundation day today. The BJP’s earlier avatar was the Bharatiya Jana Sangh (BJS) which was founded by Syama Prasad Mookherjee in 1951. Later the BJS was merged with several parties in 1977 to form the Janata Party. In 1980, the National Executive Council of the Janata Party banned its members from the ‘dual membership’ of the party and the Rashtriya Swayam Sewak Sangh (RSS). Consequently, the former Jana Sangh members left the party and floated the BJP on April 6, 1980.