Sonia Gandhi Calls For ‘unity at all levels’ In Congress | Newsmobile
Wednesday, August 17, 2022 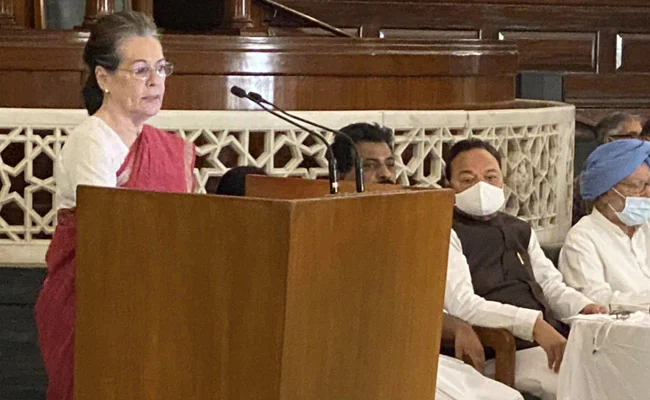 New Delhi: Congress interim president Sonia Gandhi on Tuesday called for ‘unity at all levels’ of the organisation at a meeting of party MPs in which she spoke about the party’s ‘shocking and painful’ defeats in the recently concluded elections even as she slammed the government for targeting the Opposition and ‘spreading maximum fear and intimidation’.

Stating that the road ahead for the Congress party was more challenging than ever before and the spirit of resilience of party workers was under severe test, Sonia Gandhi said she had received many suggestions on how to strengthen the party and she was working on “many of them”.

Addressing a meeting of the Congress Parliamentary Party (CPP) in Parliament, Sonia Gandhi said, “The road ahead is more challenging than ever before. Our dedication and determination, and our spirit of resilience are under severe test. Unity at all levels of our vast organisation is of paramount importance and speaking for myself, I am determined to do whatever is needed to ensure it. Our revival is not just a matter of importance to us alone–it is, in fact, essential for our democracy itself and indeed for our society as well.”

Sonia Gandhi also said she had received many suggestions on how to strengthen the Congress and she was working on “many of them”.

“I am very well aware of how disappointed you are at the recent election results. They have been both shocking and painful. The CWC has met once to review our performance. I have met with other colleagues too. I have received many suggestions on how to strengthen our organization,” she added.

The comments come ahead of a ‘Chintan Shivir’ of the party organised following party’s defeat in recently held Punjab Assembly elections and its failure to make a mark in Uttar Pradesh, Uttarakhand, Manipur and Goa. Post the poll drubbing, Sonia Gandhi had offered to step down, a suggestion that was turned down by the Congress Working Committee (CWC), even as G-23, the group of dissident leaders called for organisational changes in the party.

Speaking at the CPP on Tuesday, Sonia Gandhi also thanked all the senior and experienced colleagues who have retired from the Rajya Sabha for their contribution.

“Four of our very senior and experienced colleagues have just retired from the Rajya Sabha, more will retire before we meet next. Each and every one of them has contributed much during their tenure. I thank them all. I am sure they will all remain involved in some way or the other in public and political life, and continue to work to strengthen our party,” she said.

The Congress interim president further said that this session of Parliament has seen the Budget as well as discussions on the functioning of various ministries. “A number of you have participated and put across our party’s viewpoints forcefully. Issues of public importance have also been raised by our MPs in both Houses. Of course, the Government’s attitude has not changed,” she added.

Hitting out at the ruling BJP, she said that the ruling party’s “divisive agenda” has become a regular feature of political discourse in all states and that history is being “mischievously distorted” to add fuel to its agenda.