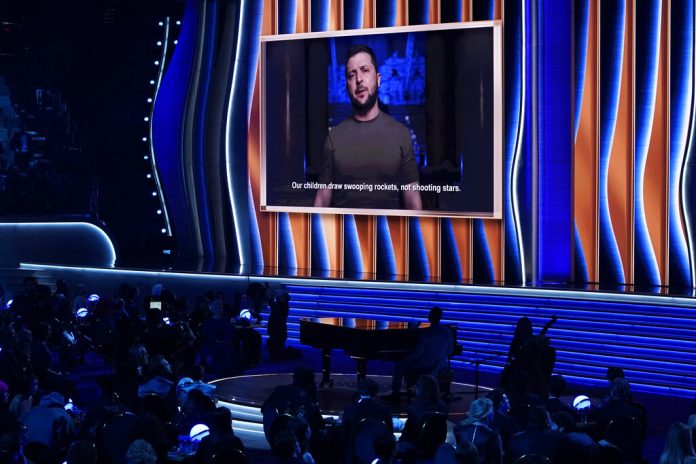 Las Vegas: Ukraine’s President Volodymyr Zelenskyy took the centre stage at the 2022 Grammys where he delivered a speech amid the ongoing Russian military operation in his country.

The pre-recorded video, which served as an introduction to John Legend’s live performance of ‘Free’ as part of a special tribute to Ukraine, had been filmed 48 hours prior to the event in a bunker in Kyiv.

“What is more opposite to music? The silence of ruined cities and killed people…” pic.twitter.com/JSXBKMDSoq

The special performance had been introduced by the show’s host Trevor Noah, who said, “Even in the darkest times, music has the power to lift spirits and give you hope for a brighter tomorrow. There’s nobody who could use a little hope right now more than the people of Ukraine.”

“The war. What’s more opposite to music?” asked the Ukrainian president while appearing on the Grammys telecast. He went on to an extended explanation of how war silences music and music can end the war.

He continued, “Our loved ones don’t know if we will be together again. The war doesn’t let us choose who survives and who stays in eternal silence. Our musicians wear body armour instead of tuxedos. They sing to the wounded. In hospitals. Even to those who can’t hear them but the music will break through anyway.”

“Anyway, we defend out freedom. To live. To love. To sound. On our land, we are fighting Russia which brings horrible silence with its bombs. The dead silence,” Zelenskyy said before urging the Grammy attendees to, “fill the silence with your music. Fill it today, to tell our story. Support us in any way you can. Any, but not silence. And then peace will come.”

He concluded his speech by naming several Ukrainian cities saying, “I have dream of them living, and free. Free like you on the Grammy stage.”

Zelensky’s appearance at the 2022 Grammys comes after the Oscars, where co-host Amy Schumer said that she had attempted to have the Ukrainian leader appear virtually.

The 64th Annual Grammy Awards kicked off on Sunday night at the MGM Grand Garden Arena in Las Vegas, Nevada.