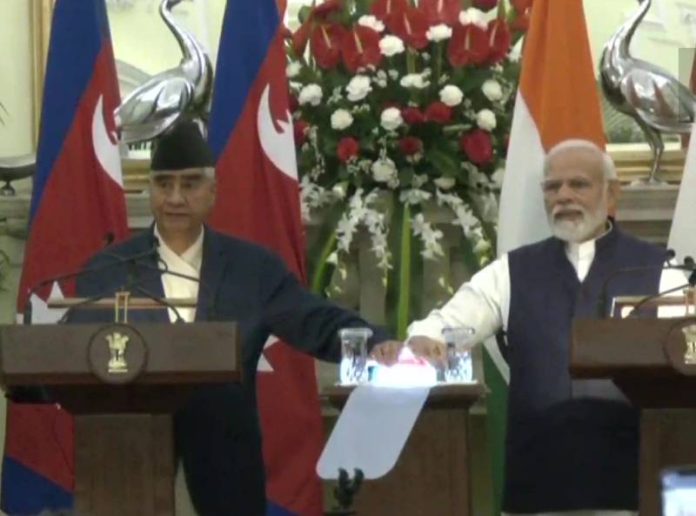 “Wide-ranging talks on our multifaceted partnership are on the agenda,” Ministry of External Affairs Spokesperson Arindam Bagchi said. This is Prime Minister Deuba’s first bilateral visit abroad since assuming office for the fifth time in July last year.
Deuba, who is accompanied by a high level delegation. is visiting India at the invitation of PM Modi.

Ministry of External Affairs Arindam Bagchi informed that the wide-ranging talks between India and Nepal’s multifaceted partnership are on the agenda during the meeting.

“Working together to take India-Nepal relations to newer heights. The meeting between PM @narendramodi and PM @SherBDeuba of Nepal gets underway. Wide-ranging talks on our multifaceted partnership are on the agenda,” Bagchi tweeted.

“Had a courtesy meeting with Nepal Prime Minister Sher Bahadur Deuba today. India and Nepal are not just neighbours but are very close to each other even from religious, cultural, linguistic and historic viewpoints,” Nadda said in a tweet.

The last Head of State/Head of Government-level visit from Nepal was in May 2019, when then PM K P Oli visited India for the swearing-in ceremony of PM Narendra Modi and the Union Council of Ministers. Before that PM Modi had visited Nepal in August 2018 for the 4th BIMSTEC Summit in Kathmandu, which was preceded by a State Visit to Nepal in May 2018.

Sher Bahadur Deuba is a veteran politician of the Nepali Congress with a political career spanning over seven decades. This is Deuba’s fifth tenure as PM. His first term was from September 1995 to March 1997.

He has visited India several times, both when in and out of power. This will be his fifth visit to India as PM, with the last visit being in August 2018. The previous three visits took place in 2004, 2002 and 1996.