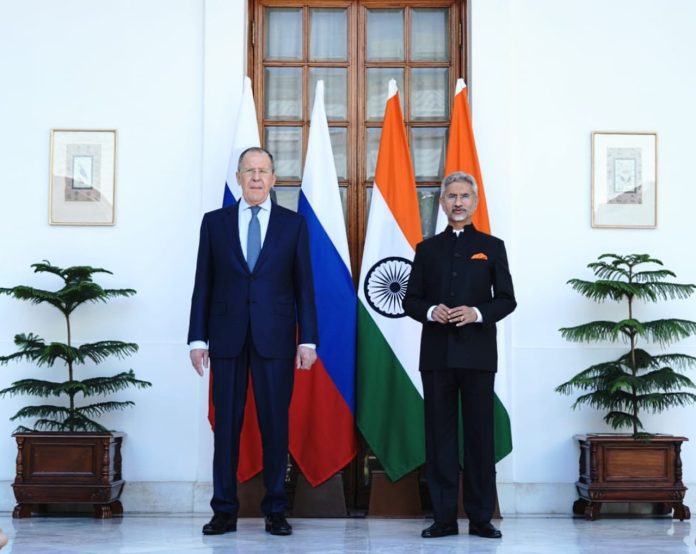 New Delhi: Russian Foreign Minister Sergey Lavrov met his Indian counterpart S Jaishankar on Friday. He arrived in New Delhi on Thursday. This is the first high-level visit from Russia since the Ukraine crisis that triggered sanctions by western countries.

Russian leaders and elites are facing western sanctions, including an asset freeze and travel ban, over the country’s invasion of Ukraine last month.

The US in coordination with the EU and the G7 has imposed sanctions on Russian President Vladimir Putin, key members of his government and members of his inner circle and over 400 Russian elites considered close to Kremlin. Over 325 members of the Duma have also been targeted with sanctions.

A ban on the export of dual-use goods has been imposed against Russia by the UK, EU and US. Russian flights have been banned by US, UK, EU and Canada. The UK has also banned private jets chartered by Russians.

The EU has imposed a ban on luxury goods exports to Russia and the UK too has decided to do so. The US has banned Russian oil and gas imports. The UK is planning to end Russian oil imports by the end of this year and the EU also plans to switch to alternative supplies.

Western countries have frozen the assets of Russia’s central bank. Russia has hit back by imposing export bans on a range of products until the end of this year. It has closed its airspace to flights from several countries.

Putin is also the head of Russia’s Security Council and Commander-in-Chief of the Russian Armed Forces, and his assets as those of Lavrov are also being frozen in the US, EU, UK and Canada.

US Treasury Department targeted Putin while announcing the sanctions.

“No one individual is more responsible for Russia’s war against Ukraine, destabilization of Russia’s neighbours, the suffering of the Ukrainian people, and years of Russian malign activities globally,” the US Treasury Department had said in a release.

Putin has said he will make “unfriendly” nations pay for their imports of Russian gas in roubles to push up the value of the currency.

Lavrov, who is also a permanent member of Russia’s Security Council, is a key Russian face in the international forums.

Targeting Lavrov, the US State Department had said that as Foreign Minister he “has advanced the false narrative that Ukraine is the aggressor as he has aggressively sought to justify Russia’s actions globally”.

Here are some other Russians against whom sanctions have been imposed by western countries.

Igor Sechin is the Chief Executive Officer (CEO), Chairman of the Management Board, and Deputy Chairman of the Board of Directors of Rosneft, one of the world’s largest publicly traded oil companies.

Sergei Naryshkin is the director of the Foreign Intelligence Service. Naryshkin was previously blacklisted by the Obama administration for his role in the takeover of the Crimean Peninsula by the Russian forces in 2014.

Dmitry Peskov is Putin’s Press Secretary. The US Department of Treasury accused him of being the “lead propagandist” and spokesperson of the Russian Federation while sanctioning him. Sanctions were also imposed on three of Peskov’s family members, “all of whom live luxurious lifestyles that are incongruous with Peskov’s civil servant salary and are likely built on the ill-gotten wealth of Peskov’s connections to Putin,” according to the US Department of Treasury.