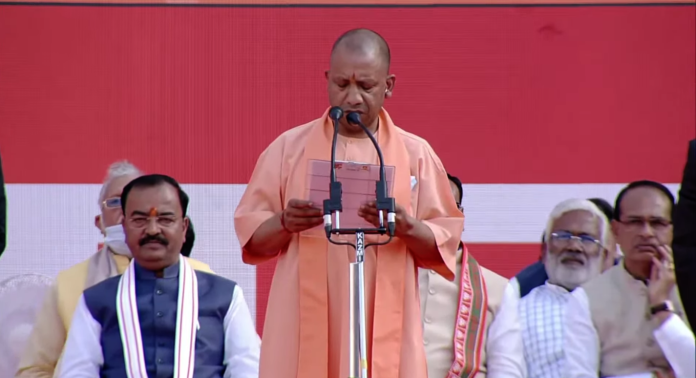 Lucknow: Yogi Adityanath was sworn in as the Chief Minister of Uttar Pradesh for the second time on Friday in a grand ceremony at Lucknow’s Ekana Stadium.

Adityanath has scripted history as he takes oath as Uttar Pradesh Chief Minister for a second term in office after completing a full five-year term, a feat none of his predecessors has been able to achieve.

A monk-politician Yogi Adiyanath was a surprise choice when BJP won the 2017 assembly polls in Uttar Pradesh. A five-time Lok Sabha MP, he was picked for the key role in the electorally crucial state by the BJP leadership and has strived to live up to expectations from him.

Yogi Adityanath gave a strong government in the past five years with improvement in the law and order situation in the state emerging a strong poll theme for BJP during electioneering for the assembly polls.

During the electoral campaign for the Uttar Pradesh elections, the Prime Minister lauded Yogi Adiyanath’s work and his coinage – “UP plus Yogi bahut hai upyogi” (UP plus Yogi is very useful) became quite popular.

Yogi Adityanath chose to contest the assembly polls and won the Gorakhpur Sadar seat by a huge margin.

The BJP has created other records with its successive victory in Uttar Pradesh. It is the first time that a party has returned to power in successive polls after 37 years.

The BJP won 255 seats in Uttar Pradesh with its allies in the state also registering impressive performance. The chief minister is expected to carry the momentum of the party’s electoral victory to fulfill the poll promises and give a further push for the development of the state in his second term.