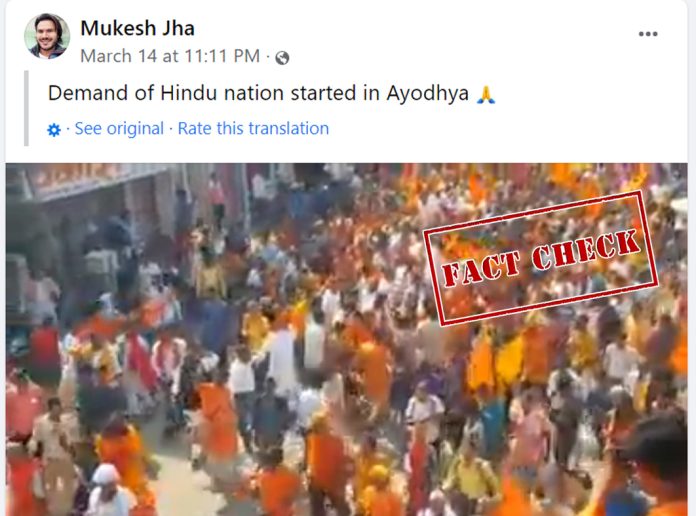 A video of rally with the crowd carrying saffron flags is being widely shared on social media with a claim that the procession was taken out in Ayodhya with a call to make India a ‘Hindu Rashtra’.

The video is being shared on Facebook with a Hindi caption, “अयोध्या में शुरू हुई हिंदू राष्ट की मांग” 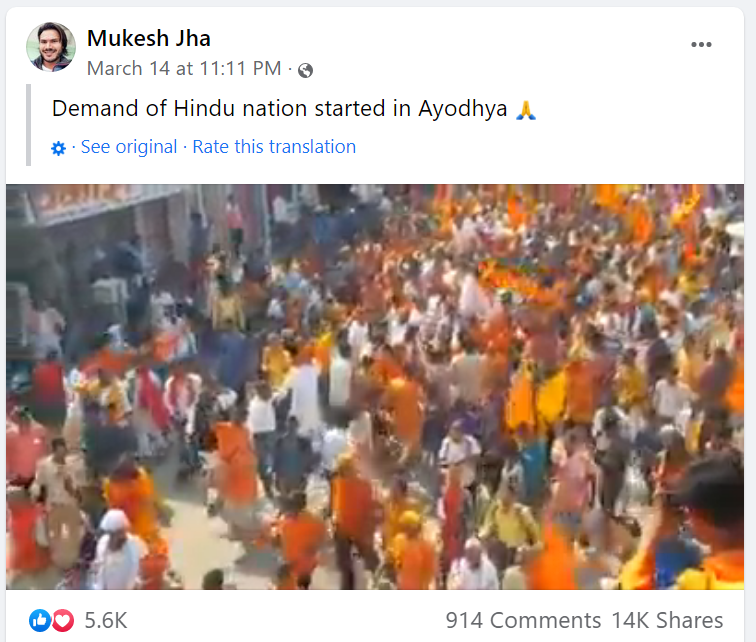 Using the InVid Tool, we extracted keyframes from the viral video and performed a Reverse Image Search. This search directed us to a Facebook page that carried the same viral video on June 5, 2020, with the caption, “Under the leadership of Dr Praveen Bhai Togadia Ji, the last movement of Ram Janmabhoomi was concluded on 21, 22, and 23 October 2018 to wake up the Modi government to enact a law in Parliament on the lines of Somnath for the construction of a grand temple at Ram Janmabhoomi.”

Searching further, we found the same video uploaded on another Facebook profile on October 26, 2018, with the caption, “Under the leadership of Praveen Togadia Ji, the mass of Ram devotees took the construction of Ram temple in Ayodhya. The temple will be built there whatever it is. Remember, if there is no temple, then there is no vote. Long live Rama.”

Taking a cue from this information, we did a keyword search and found the same viral video was carried in a news report by New18 on October 23, 2018. According to the news report, Praveen Togadia, a member of the Vishva Hindu Parishad (VHP) along with his supporters took out a rally to pressurize the government for the construction of the Ram temple in Ayodhya. Praveen Togadia tried to circumambulate Ramkot in Ayodhya, which was stopped by the police. Angry VHP workers clashed with the police as the parikrama was stopped.

Searching further, we found many video news reports that reported the same incident back in 2018. Check here and here.

Thus, it is evident from the above information that an old video is being falsely shared as a recent procession held in Ayodhya demanding to make India a ‘Hindu Rashtra’. Therefore, the viral claim is misleading.