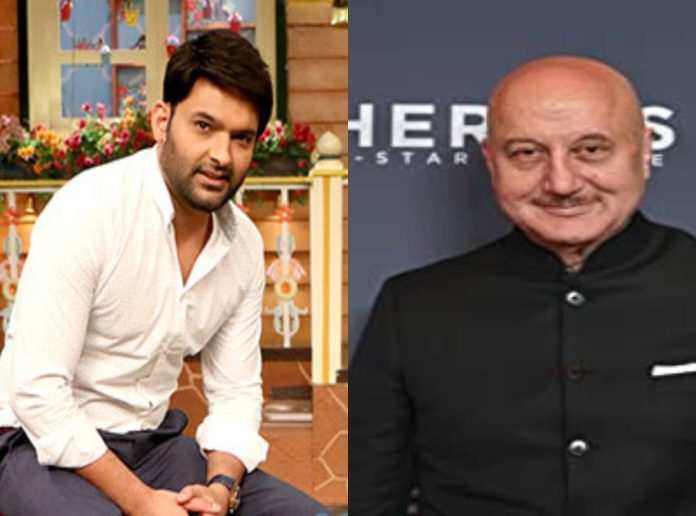 Comedian-actor Kapil Sharma recently thanked veteran star Anupam Kher for refuting false claims against him that he deliberately didn’t invite the team of ‘The Kashmir Files’ on his popular TV show.

Last week, the comedian got trolled on social media for allegedly not inviting the team of Vivek Agnihotri’s latest directorial, ‘The Kashmir Files’, on ‘The Kapil Sharma Show’. Though Kapil had explained that there was no truth to such claims, ‘Boycott Kapil Sharma’ heavily trended on Twitter. Reacting to these claims, the lead star of the movie, Anupam Kher, in a recent interview, clarified that he was invited to Kapil’s show but chose not to attend given the movie’s sensitive subject and the show’s light-hearted nature.

However, the veteran actor also said that it was two months ago that he got invited.
On Monday night, Kapil shared a video from Anupam’s interview in which he is telling a TV anchor that he was invited to ‘The Kapil Sharma Show’, but he told his manager that he cannot attend because of the film’s subject matter, which would be inappropriate for a comedy talk show.

Reacting to the video, Kapil wrote on Twitter, “Thank you paji [?][?]@AnupamPKher for clarifying all the false allegations against me. Thanks to those who showered me with so much love without knowing the truth.”

However, Anupam later replied to Kapil saying he wish the comedian would have shared the whole video and not the “half truth”.

The veteran actor tweeted, “Dear @KapilSharmaK9! I wish you had posted the full video and not the half truth. The entire world is celebrating, you also celebrate tonight. Love and prayers always!”

Dear @KapilSharmaK9 ! I wish you had posted the full video and not the half truth. The entire world is celebrating, you also celebrate tonight. Love and prayers always! 🙏🌈 https://t.co/QS3i5tIzh8

In line with the actor’s tweet, a Twitter user shared the full video of Anupam and Vivek Agnihotri’s discussion of the controversy from the interview.

In the video, Vivek Agnihotri called ‘Kashmir’ the superstar of his film. Meanwhile, Anupam shared about refusing to make an appearance on the show. However, he further added that his refusal wasn’t the reason behind ‘The Kapil Sharma Show’ not promoting ‘The Kashmir Files’.

Further, Vivek divulged that the reason that he was given by the producers was different and is well known to people. Anupam then added that Kapil surely doesn’t have any malice towards him or anyone from the film.

The controversy sparked after ‘The Kashmir Files’ director Vivek Agnihotri wrote on Twitter that his team was not invited to Kapil’s show since the film didn’t feature any big stars.
Responding to a fan who wanted the movie to be promoted on ‘The Kapil Sharma Show’, the director wrote, “I don’t get to decide who should be invited on @KapilSharmaK9 show. It’s his and his producers choice whom he wants to invite. As far as Bollywood is concerned, I’d say what once Mr. Bachchan was quoted saying about Gandhis: Woh raja hai, hum rank.”

‘The Kashmir Files’ has received an overwhelming response from fans and critics alike. Until now, the film has made Rs 27.15 crores.

The film, which revolves around the genocide of Kashmiri Pandits in 1990, had released in theatres on March 11. It stars Anupam, Mithun Chakraborty, Pallavi Joshi, Darshan Kumaar, and others.

The film has been declared tax-free in several states including Uttar Pradesh, Tripura, Goa, Haryana and Uttarakhand.