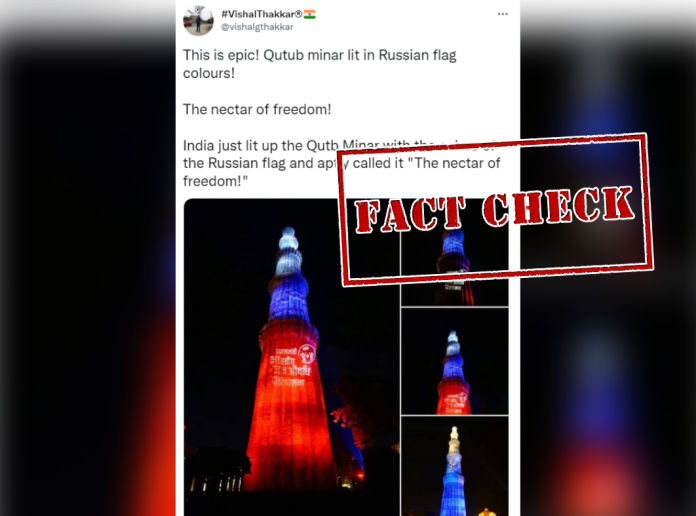 In the backdrop of the ongoing Ukraine-Russia war, a set of images is being widely shared on social media claiming that Qutub Minar was lit up with Russian flag colours. 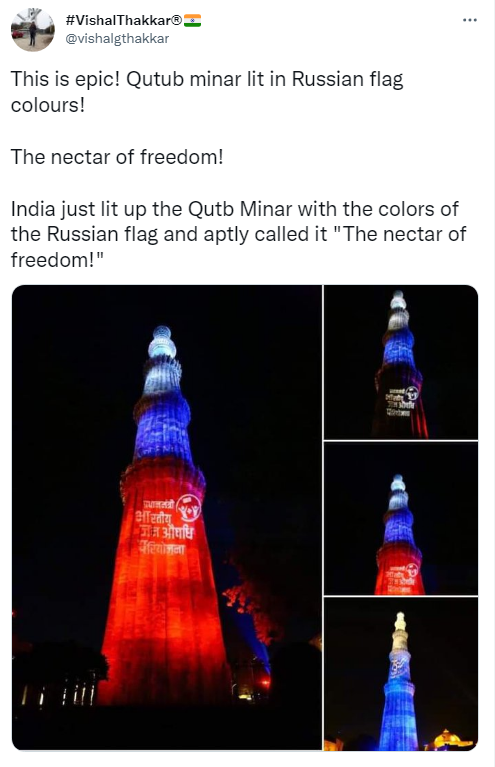 Looking closely at the image, we saw “Pradhan Mantri Bharatiya Janaushadhi Project” written on Qutub Minar in Hindi along with the logo of the scheme. 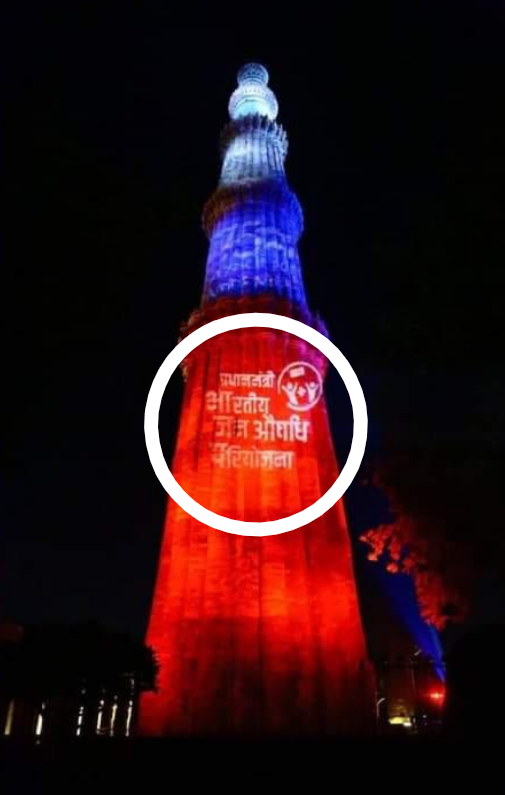 Taking a cue from this, we did a keyword search and found similar images uploaded on the official Twitter handle of ‘Pradhan Mantri Bhartiya Janaushadhi Pariyojana’ on March 5. The text reads, “Historical Monument of our Country, Qutub Minar illuminates on the occasion of Jan Aushadhi Diwas 2022. This great moment captured on the camera will leave a mark on history.”

Historical Monument of our Country, Qutub Minar illuminates on the occassion of Jan Aushadhi Diwas 2022.This great moment captured in the camera will leave mark in the history.@pmbjppmbi @AmritMahotsav #JanaushadhiDiwas2022 #AmritMahotsav pic.twitter.com/c2tumTqi6C

Searching further, we found a Facebook post uploaded on the official handle of ‘Pradhan Mantri Bhartiya Janaushadhi Pariyojana’ which shows Qutub Minar illuminated with red, white and blue colours. According to the post, Qutub Minar was illuminated with Azadi Ka Amrit Mahotsav and Jan Aushadhi theme from March 5-7, 2022, from 6:30 pm to 10 pm.

An amazing confluence of technology & beauty!

More searches directed us to a Twitter post uploaded by PIB Fact Check Bureau on March 7, that dismissed the viral claim as misleading. “Qutub Minar was illuminated as a part of the #JanaushadhiDiwas2022 celebrations,” read the tweet.

@globaltimesnews has claimed in a tweet that Qutub Minar was lit up with the colours of the Russian flag.#PIBFactCheck