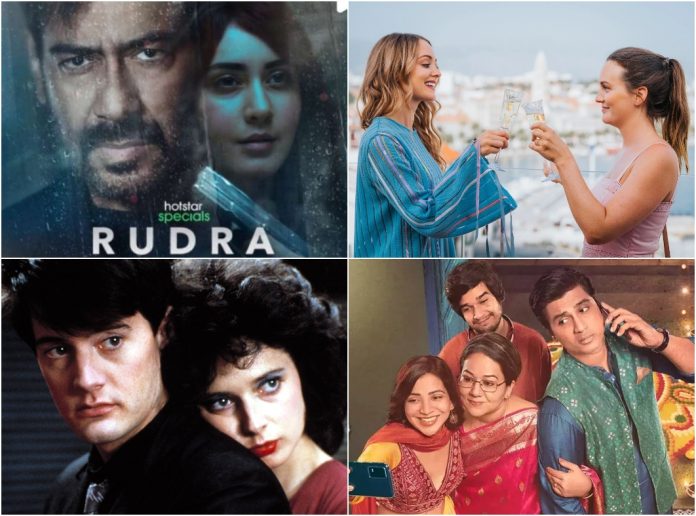 March is here! The weekend days will be warmer, and if you don’t feel like going out, here’s a list of new OTT releases to keep a watch out for. Some of them are even Oscar nominees!

Several new films in genres like action, thriller, sci-fi, and comedy will be released in March 2022 on streaming platforms such as Netflix, Hulu, Amazon Prime Video, and others.

Rudra: The Edge Of Darkness

The series Rudra marks actor Ajay Devgn’s online debut, after Gangubai Kathiyavadi, Rudra is the second coming of Ajay Devgan in 2022, it is a dark and complex thriller that delves deep into the minds of extremely brilliant criminals as well as the detective who hunts them. More cast aside from Ajay who plays an aggressive and ferocious officer, the crime thriller features a great cast that includes Raashi Khanna, Esha Deol, Atul Kulkarni, Ashwini Kalsekar, Tarun Gahlot, Ashish Vidyarthi, and Satyadeep Misra in pivotal roles.

The plot of ‘Piece of Her’ is based on Karin Slaughter’s novel of the same name, published in 2018. The web series has been classified as Crime, Drama, and Thriller. It tells the storyline of a young woman caught up in a deadly mass shooting.

Watch Piece Of Her on Netflix, released on March 4th.

‘Sultiyan’ is a heart-warming family drama. The storyline of the web series centres around the lives of two young children who return to their childhood home in Bhopal a few weeks before Diwali. The cast is Ayesha Raza, Shiv Pandit, Vivaan Shah, and Plabita Borthakur.

Starring Vidya Balan after a long and Shefa Shah, Manav Kaul and more, Jalsa is about a hit and run of an 18-year-old girl. This becomes the hub of a wheel that sets into motion many a spoke – a journalist, a raging mother, a cop and a system all caught in an ethical dilemma.

Watch out for Jalsa on Amazon Prime Video on March 18th.

Dhanush stars in this latest action-thriller as an investigative journalist, directed by Karthick Naren. The plot is about a journalist who gets in difficulty for uncovering a heinous swindle in his report. Dhanush, Malavika Mohanan, Samuthirakani, Krishna Kumar, Master Mahendran, Jayaprakash, and Aadukalam Narain play significant parts in the criminal thriller.

TWA is a tense thriller that follows two best friends on a vacation gone wrong. When Beth’s closest friend goes missing during a ladies’ trip to Croatia, she tries to find out what happened. However, each discovery reveals another frightening falsehood. When one of them goes missing, the other is forced to prove her innocence, but her efforts to learn the truth reveal heartbreaking truths. Kim Farrant directed the film. Sarah Alderson wrote the screenplay. Based on Sarah Alderson’s novel “The Weekend Away.”

Watch The Weekend Away on Netflix, Released on March 3rd.

The new version of West Side Story by Steven Spielberg is now available on OTT. The film, which has gained widespread critical acclaim and seven Oscar Nominations, is now available to watch. The film has been lauded as one of Spielberg’s best and, in some ways, an upgrade on the original. Could one of the most beloved musicals of all time, West Side Story, benefit from a modern remake? The film has Oscar nominations including Best Picture, Best Director and Best Supporting Actress and 11 Critics’ Choice Awards and also is the winner of three Golden Globe awards.

This fascinating biography of 20th-century icon Howard Hughes won five Oscars. The epic drama follows Hughes from the 1920s through the 1940s, when he made a fortune creating films and inventing planes, while simultaneously romancing Jean Harlow and Katharine Hepburn. Cate Blanchett won supporting actress for her role as Katherine Hepburn, while the film received 11 Academy Award nominations, including director and actor for Leonardo DiCaprio.

Watch The Aviator on HBO Max, released on March 1st.

Blue Velvet, featuring Kyle MacLachlan as a college student who returns home after discovering a severed ear in his yard and finds a horrific criminal network. Co-stars include Isabella Rossellini, Dennis Hopper, and Laura Dern. Lynch was nominated for an Oscar for best director for his work on the picture, which, in typical Lynch manner, gets to the heart of an apparently beautiful American small town.