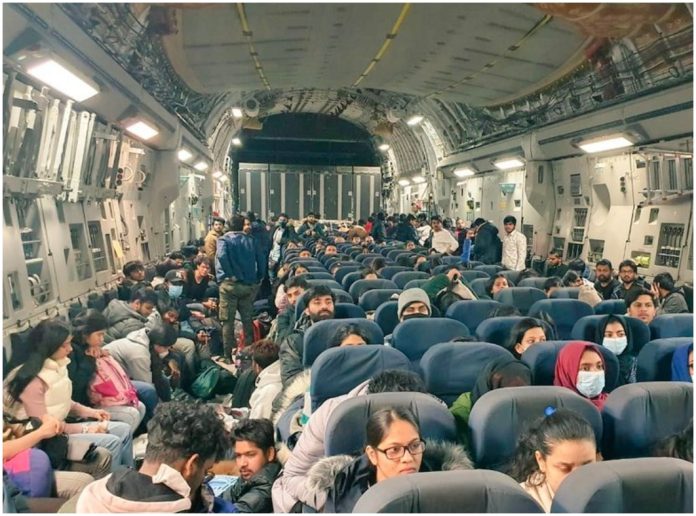 Over 11,000 Indian people have been evacuated from the conflict-torn country as a result of ongoing Russian military actions in Ukraine, stated Minister of State for External Affairs V Muraleedharan on Saturday.

Muraleedharan confirmed on Twitter, “Operation Ganga is in full swing, with over 11,000 Indians evacuated from Ukraine so far.”

#OperationGanga is in full swing, with over 11,000 Indians evacuated from Ukraine so far.

Happy to have received a group of 170 Indians at New Delhi airport, evacuated through @AirAsiaIndia

In other tweets of the Indian embassy, stated that they are attempting to securely evacuate all citizens. The Indian embassy in Ukraine stated in a tweet that it had discussed evacuations and safe exit routes with the Red Cross and other interlocutors and they arranged buses to evacuate 298 Indian students from Pisochyn, in Kharkiv.

Exploring all possible mechanisms to evacuate 🇮🇳n citizens in Sumy, safely & securely.
Discussed evacuation & identification of exit routes with all interlocuters including Red Cross.
Control room will continue to be active until all our citizens are evacuated.
Be Safe Be Strong

Reaching out to our 298 students in Pisochyn.
Buses are enroute and expected to arrive soon. Please follow all safety instructions and precautions.
Be Safe Be Strong. @opganga @MEAIndia

On Friday, Prime Minister Narendra Modi also chaired over a meeting to discuss the ongoing evacuation of Indian citizens as well as the situation in conflict-torn Ukraine.

In addition, the government has dispatched special envoys to four other nations bordering Ukraine to coordinate and oversee the evacuation of Indian nationals.

Some of the Indian citizens being evacuated were also concerned about their pet dogs and cats.

On March 2, the Indian government issued a special advisory permitting citizens to bring their pets back to India from Ukraine. Following the advisory, images of Indians boarding evacuation aircraft with their dogs began circulating on social media platforms.

Some of the evacuees brought their four legged best friends as well.

Good to have all of our #IndianStudents aboard on the @IAF_MCC C-17 Globemaster ready to return to the safety of our motherland.#OperationGanga #NoIndianLeftBehind@PMOIndia @narendramodi pic.twitter.com/XprDh0p57K

According to Foreign Ministry spokesman Arindam Bagchi, 700 Indians are trapped in Sumy, 300 in Kharkiv, and some citizens out of over 900 are being taken out of Pisochyn in five buses.

Many students in tweets claim bombs are being dropped close to their University campus, and they can hear sounds of gunfights and air raids regularly.

India has also urged Ukraine and Russia to impose a ceasefire in the northeastern Ukrainian city of Sumy in order to assist in the evacuation of hundreds of Indian students.

During a media briefing, he stated that around 20,000 Indians have fled Ukraine since India issued initial advisories in mid-February, before the conflict started.

The Ministry of External Affairs announced on Friday that 16 flights, including the Indian Air Force’s C-17 aircraft, were scheduled over the next 24 hours as part of Operation Ganga.

As part of the same, Operation Ganga, the IAF has flown 10 flights to return 2,056 passengers while transporting 26 tonnes of relief supplies to these nations.