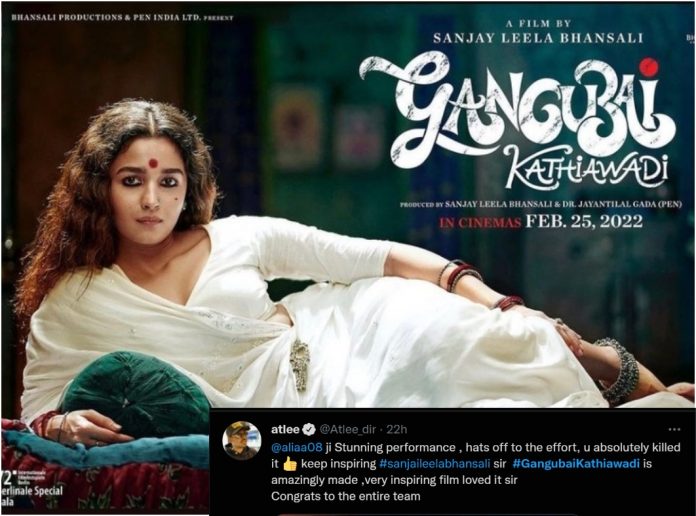 Gangubai Kathiawadi, one of the most anticipated films of 2022, has landed in cinemas. The film, directed by Sanjay Leela Bhansali released in theatres on February 25. The movie is a biographical drama set in the 1960s about a young prostitute, Gangubai, who goes through Trauma and subsequently becomes a prominent face when working for the community.

Since the release of the Gangubai Kathiawadi trailer, many have taken to social media to express their dissatisfaction with the film’s casting. They believed that actresses such as Tabu or Vidya Balan would have been better selections and some also hailed for ‘Boycott Bollywood’ in the name of nepotism. However, after the film’s theatrical release, Twitterati proved that no one other than Alia Bhatt could match the role perfectly.

Twitterati is blown away with Sanjay Leela Bhansali’s Gangubai Kathiawadi. Within hours of the film’s release, fans took to Twitter to give their views on it:

#GangubaiKathiawadi is on RAMPAGE mode today ( Sat) in big cities, its Day-2 collection is heading towards ₹ 13-14 cr nett despite 50% occupancy in major markets. This film reiterate the fact that #SLB is the biggest director of Hindi film industry & #AliaBhatt biggest actress. pic.twitter.com/0aKq3nh6pd

“rona uski kismat thi or hasna uski fitrat” this line difine Gangu..
And for Alia I have no words ..this girl can do anything the dialogue delivery,body language ..the aura that she creates ….. brilliant #AliaBhatt #GangubaiKathiyawadi ❤️ pic.twitter.com/9DvPg84hOD

#GangubaiKathiawadi is a WINNER … legendary performance by Alia she literally made me speechless … and film making at its best by bhansali … HANDS DOWN TO BOTH … i dont know how many times im gonna watch this … its a SURPRISE!! And alia is coming around 3 here EXCITED 🤍✨

Acting level on this movie will be Surely Insane… Don’t believe in IMDB rating.. There are so many Alia haters who giving 1 Star without releasing the Movie.. So go with your Family and watch this Beautiful Movie in theaters.. #GangubaiKathiawadi #AliaBhatt https://t.co/rUTm5Fwvqh pic.twitter.com/YxkaN3eCiE