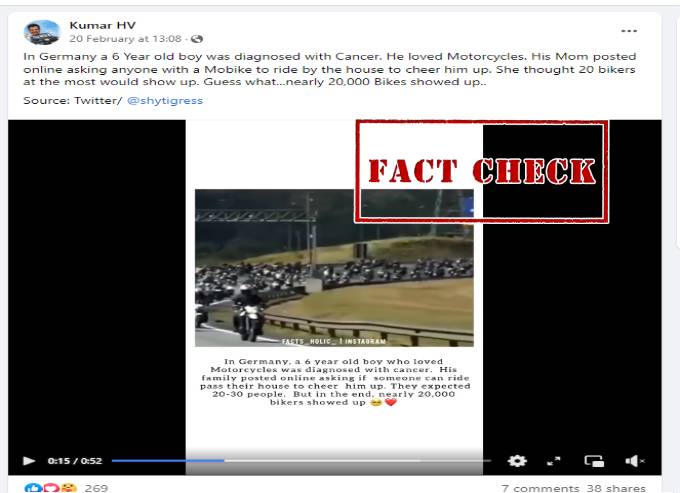 A video of a bike rally is being shared circulated on social media with a claim 20,000 bikers drove past the house of a 6-year-old cancer patient in Germany after his mother mentioned online that he loves bikes.

The video is being shared with a heart-wrenching story that reads, “In Germany, a 6-Year-old boy was diagnosed with Cancer. He loved Motorcycles. His Mom posted online asking anyone with a Mobike to ride by the house to cheer him up. She thought 20 bikers at the most would show up. Guess what…nearly 20,000 Bikes showed up..” 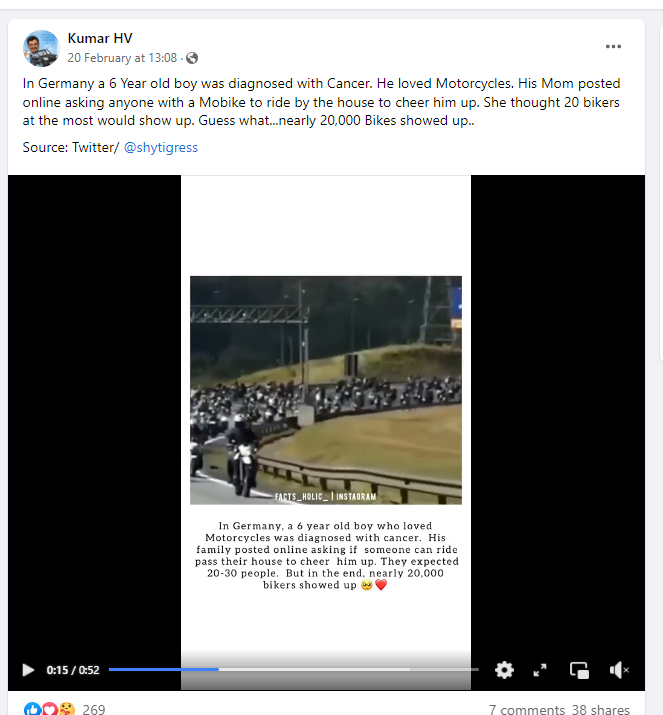 On doing a Google Reverse Image Search with keyframes of the video, we found that the same video was uploaded on a YouTube channel on July 31, 2021. In the video, we can see that one of the billboards in the video has words like ‘soluções’ which is a Portuguese word for ‘solution’ and ‘funerais’ which is Portuguese for ‘funeral’. 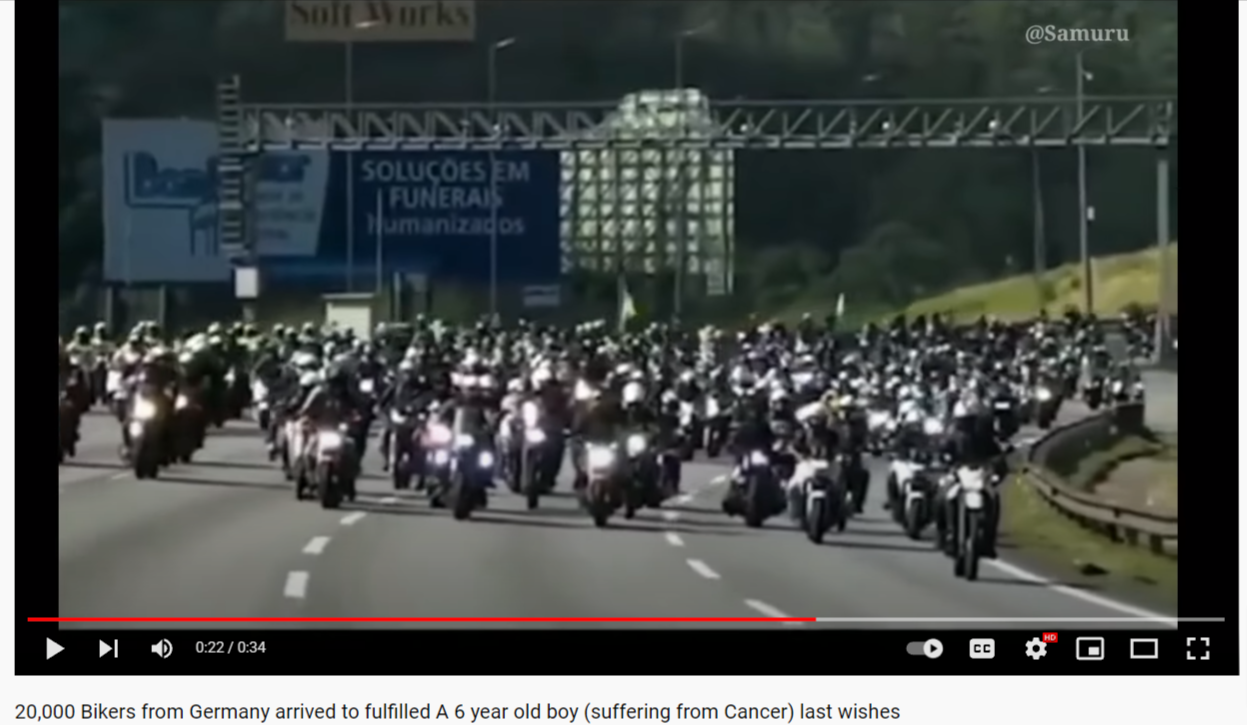 Also, in the same video, at around 34 seconds, one can see some other vehicles that are in front of the motorbikes. 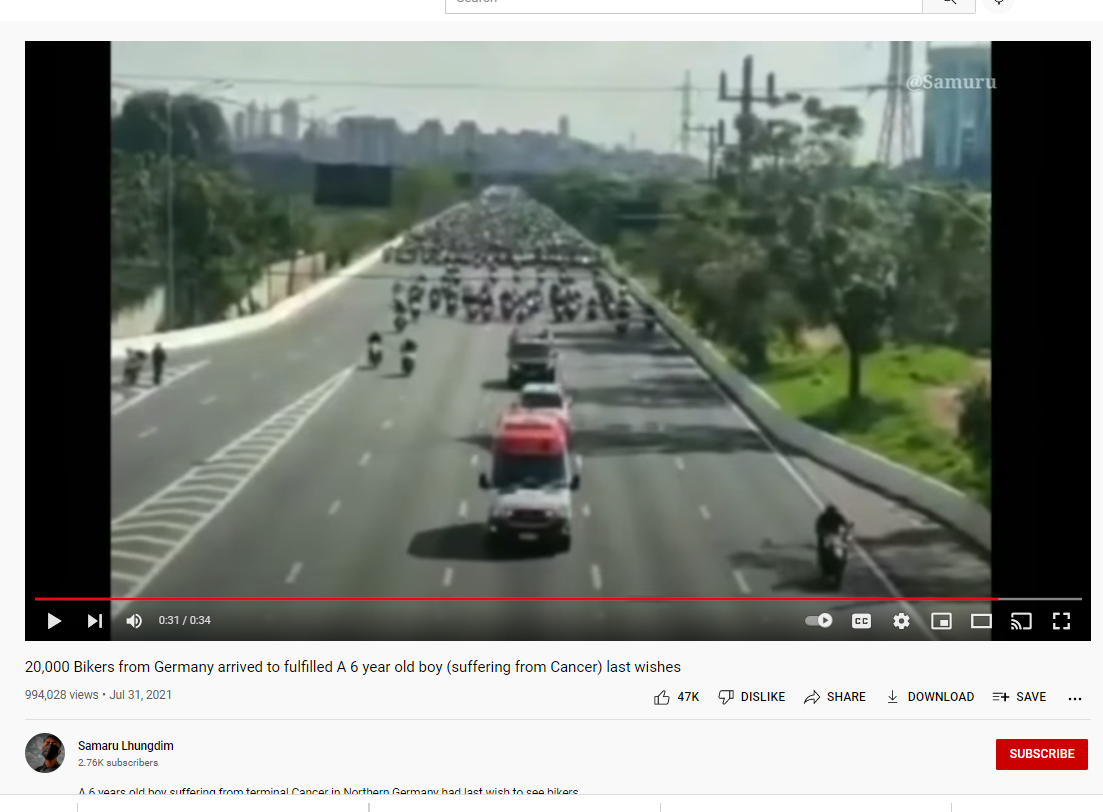 In another video published by Folha De S.Paulo, taken from another angle, one can clearly see the same vehicles in front of the motorbikes. The article was published on June 18, 2021, with the title that reads in English as (via Google Translation), “Highway cameras show motorcycle rider passing with Bolsonaro in SP.” Jair Bolsonaro is the President of Brazil.

The article said that the monitoring system for the Bandeirantes Highway recorded 6,661 vehicle passages on the morning of June 12, 2021, at the first toll booth within the section blocked for the motorcycle rider led by President Jair Bolsonaro in São Paulo. 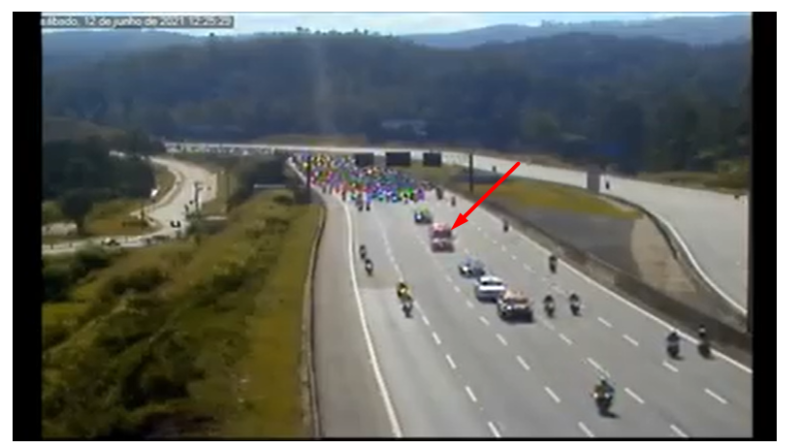 On further investigation, we found the same video was uploaded by a YouTube channel on June 12, 2021, with the caption that read, “INSANE: Over a MILLION bikers joined a Motor Parade in Sao Paulo lead by Brazil President Bolsonaro.” 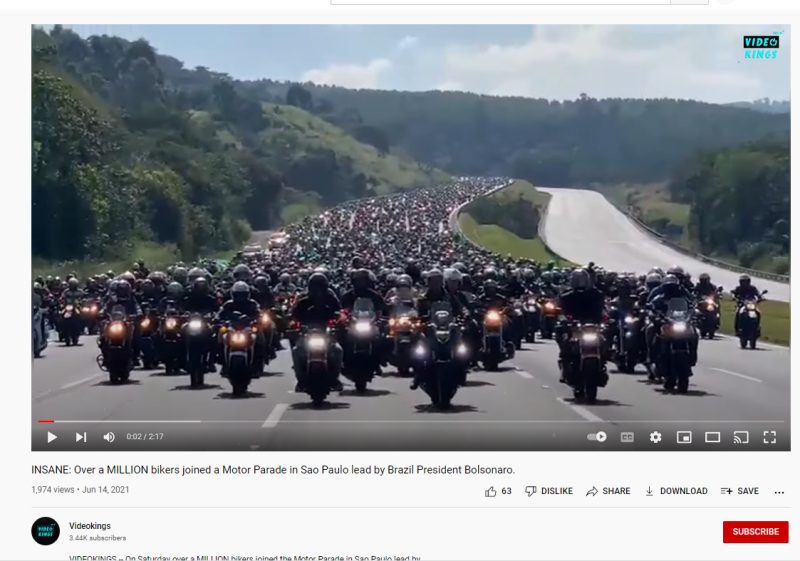 Reuters also reported about the bike rally held by Jair Bolsonaro and his supporters on June 12, 2021.

However, we also found a report by Manorama News dated October 2021, about the ‘15,000 bikers driving to the house of a 6-year-old Cancer Boy in Germany to fulfil his wish of seeing the bike.

Thus, it is clear that the viral video shows a bike rally held by Jair Bolsonaro and does not show the visual of 20,000 bikers riding for a boy diagnosed with cancer in Germany. Hence, the post is misleading.