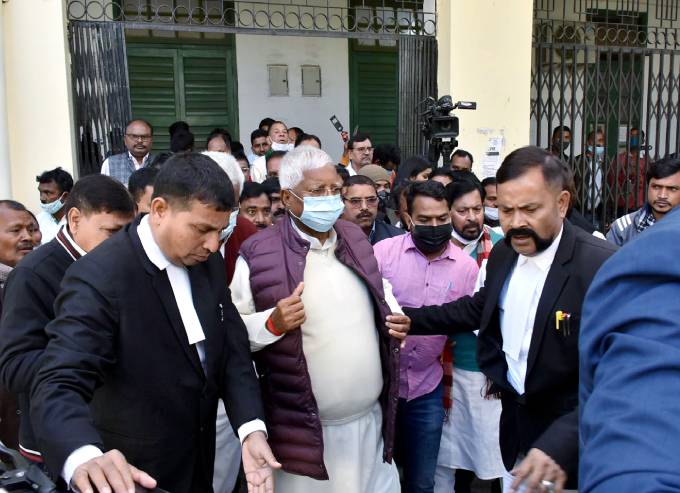 A CBI court on Monday sentenced former Bihar Chief Minister Lalu Prasad Yadav to five years imprisonment in the fifth fodder scam case and imposed a fine of Rs 60 lakhs on him.
Yadav was declared guilty on February 15. Of the 99 accused in the case, 24 were acquitted, while three-year jail terms were pronounced for the 46 accused. The fate of the remaining accused will be decided on Monday. Yadav has been found guilty of illegal withdrawals of Rs 139.35 crore from the Doranda treasury by a special CBI court in Jharkhand’s Ranchi.

The hearing for the pronouncement of quantum of punishment for Yadav has been scheduled for today.

Yadav has been sentenced in four fodder scam cases. This case (RC 47A/97) was the fifth and the biggest in which Rs 139.35 crore was illegally withdrawn.

The Rs 950-crore fodder scam relates to the fraudulent withdrawal of public funds from government treasuries in various districts of undivided Bihar.

Of the original 170 accused in the matter, 55 have died, seven have become government witnesses, two have accepted the charges against them and six are absconding. The court gave the verdict on February 15 against the remaining 99 accused, including Yadav.

The scam came into light after a raid conducted by Deputy Commissioner of Chaibasa Amit Khare at the Animal Husbandry Department in January 1996. The CBI was roped in by the Patna High Court in March 1996 after increasing pressure to investigate the case. The CBI registered an FIR in the case at a time when Bihar was still undivided.

In June 1997, Yadav was named an accused in the case for the first time in the chargesheet filed by the CBI.

Following the chargesheet and mounting pressure from the Opposition, Yadav resigned as the Chief Minister after which Rabri Devi succeeded him in July 1997 even while he continued to operate behind the curtains in Bihar.

Due to the bifurcation of Bihar and the formation of Jharkhand, the case was transferred to the Jharkhand High Court in October 2001. Special CBI court began trial in the fodder scam case in February 2002. Yadav’s first conviction came in September 2013 in the Chaibasa treasury case related to fraudulent withdrawal of Rs 37.70 crore.

He was handed over five years in prison leading to his disqualification from the Lok Sabha membership. He was later granted bail by the Supreme Court.

The RJD supremo’s trouble renewed again in 2017 when a special CBI court in December 2017 convicted him in the second scam case related to fraudulent withdrawal of Rs 89.27 lakh from Deoghar treasury.

He was sentenced to 3.5 years of jail term but was granted bail in July last year after completing half of the sentence.

The former Chief Minister’s third conviction came in January 2018 in the Chaibasa treasury case related to fraudulent withdrawal of Rs 33.13 crore. He was awarded five years of imprisonment in this case.

Two months later, the special CBI court in March 2018, had held him guilty of conspiracy and corruption charges in the scam case related to fraudulent withdrawal of Rs 3.76 crore from Dumka treasury from December 1995, to January 1996. It had handed him 14 years in prison and slapped a fine of Rs 60 lakh on him.