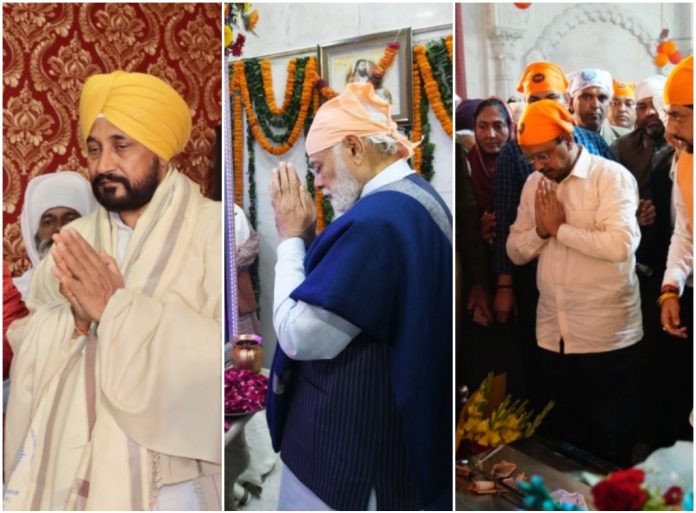 With just four days to go for the polling in Punjab, all political leaders were busy on Wednesday paying tributes at various temples to pay tributes to the 15th-century Bhakti poet, social reformer and Dalit icon, Guru Ravidas who has a large number of followers in the poll-bound northern state.

The birthplace of Guru Ravidas is about 1,000 km away from Punjab in Uttar Pradesh but his influence in Punjab can be seen by the fact that all political parties had supported the demand for changing the polling date in Punjab from February 14 to 20 to enable the people to visit his birthplace. In a rare move, the Election Commission acceded to the request. Political leaders also visited the birthplace of Guru Ravidas in Varanasi.

At the Seer Goverdhanpur temple in Varanasi, among the first visitors before the day-break was Punjab Chief Minister Charanjit Singh Channi who is the first Dalit chief minister of Punjab. His Uttar Pradesh counterpart Yogi Adityanath, Congress leaders Rahul Gandhi and his sister Priyanka Gandhi Vadra as well as the Aam Aadmi Party (AAP)’s Rajya Sabha member Sanjay Singh also visited the temple. His followers are called Ravidasias.

Taking the lead in the Capital’s Karol Bagh Ravidas temple was Prime Minister Narendra Modi who also participated in a “Kirtan” (devotional song). His video playing a traditional Kartal while the women and others sang bhajans went viral during the day. Prime Minister Modi also recalled a reference to Sant Ravidas during a rally in the border town of Pathankot in Punjab.

“Today is the anniversary of Sant Ravidas-ji. Before coming here I went to the Ravidas Mandir in Delhi and took his blessings. Many devotees from Punjab have gone to Varanasi. We have run two special trains. As an MP of Benaras, I have ensured that devotees don’t face problems,” he said.

Guru Ravidas, said to have been born in Seer Goverdhanpur village near Varanasi, was the founder of the Ravidassia religion. Ravidassias belong to the Dalit community and their population is mainly based in Doaba region of Punjab.

Their dera, Dera Sachkhand Ballan, reportedly has about two million followers globally and exercise influence in the Dalit community who form about 32 per cent of the population in Punjab and that is the reason behind all parties wooing them in the run up to the polls.