Home Battle For States NewsMobile Editors Analysis: Issues That May Decide Results Of UP Polls 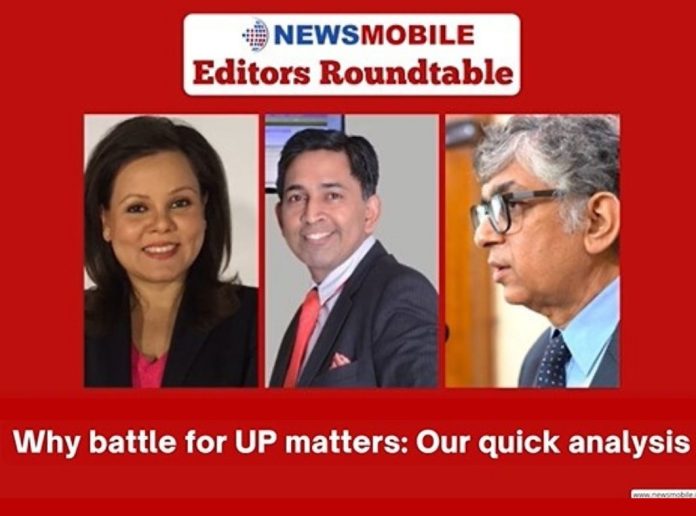 As voting for the first phase of the Uttar Pradesh elections on 58 assembly seats covering 11 districts of the state ended on Thursday, NewsMobile’s editors discuss issues that may decide the future course of politics in Uttar Pradesh.

“Uttar Pradesh elections are the most crucial. This is India’s most populous state and as goes to say, the route to Delhi (Centre) passed through Lucknow,” says Vinay Kumar.

If BJP is able to retain UP, it will be for the first time in 30 years that any political party has been re-elected in the state, he further adds.

“There (in the Global-Corporate community) is a lot of interest in the Indian state elections, particularly in the state of Uttar Pradesh,” says Saurabh Shukla.

He adds, “Investors are also looking at the bigger picture that how will this election pan out to get a stable government in place.”

Highlighting the investors’ mindset, he says that the global community is looking at investing in places that are relatively stable, have good law and order, have investor-friendly climates, and can provide safety and security for the company and its employees.

Impact of Farmers’ protest on UP assembly polls’ result

“Agitation over the three farm laws has been a major issue, not only in Uttar Pradesh, in Punjab, Haryana, and other states well. The problem was the agitation was allowed to go on for nearly a year,” says Vinay Kumar.

He further adds, “there was no dialogue with the farmers and I believe in a democracy that comes as a ‘minus’ point. And ultimately, PM has to step in November and announce that his government has taken a decision to repeal the farm laws but by then BJP’s image suffered a dent for not speaking to farmers.”

Opposition unity ahead of UP polls

Talking about the emerging alliance of opposition Saurabh says, “Opposition unity will help the opposition, especially Akhilesh and Jayant but even now PM Narendra Modi continues to be the most towering figure in UP.”

He states that handling of COVID19 during the second wave and the unemployment it has led to will also be major issues in this election. However, the voters will look at the bigger picture like the law and order situation in the state. He further adds, that booth management will also be crucial in the elections.

You can watch the complete discussion here: