Home Home Slider India Is The Only Large Economy With High Growth And Low Inflation:... 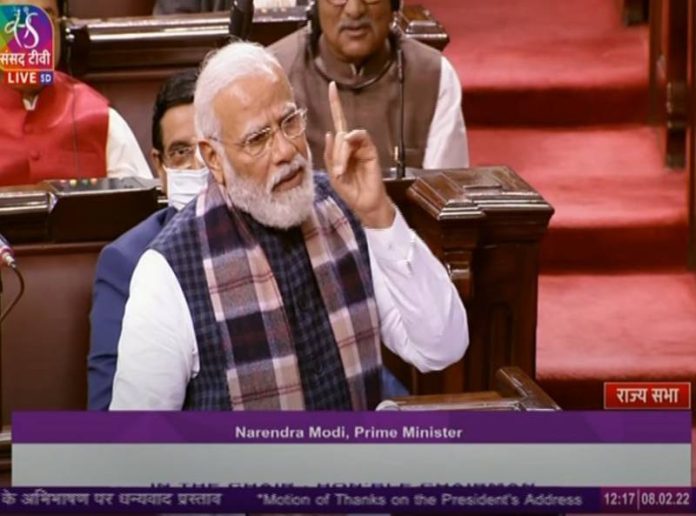 Prime Minister Narendra Modi on Tuesday said that India is the only country in the world, which is witnessing high economic growth and also keeping inflation in check at about 4-5 per cent, which was in double digits before 2014.

“The US is facing the worst inflation in 40 years. The UK is facing the worst inflation in 30 years. Similar trends are visible in many other European countries. However, we have kept the inflation in check in the range of 4 -5 per cent. During the UPA regime, inflation had touched double digits. We are the only large economy with high growth and low inflation,” said PM Modi, in Rajya Sabha in his reply to the debate on the Motion of Thanks to the President’s address to the joint session of Parliament. PM Modi further slammed Opposition parties for showing the lack of trust in the Indigenous COVID-19 vaccines.

“Some of the leaders of the Opposition parties showed immaturity in the last two years. We have seen how games were played due to political vested interests. Campaigns were launched against Indian vaccines to create doubts in the minds of the people,” said PM Modi.

PM Modi had replied to the debate on the Motion of Thanks to the President’s address to the Parliament on Monday evening.

“Some people need self-introspection. When an all-party meeting over the outbreak of the Coronavirus pandemic was called and the government gave a detailed presentation, attempts were even made that some of the parties skipped such an important meeting. They themselves did not come and boycotted the meeting,” he added.

PM Modi, however, extended his appreciation for the former Union Minister and Nationalist Congress Party (NCP) leader Sharad Pawar. “I would like to express my gratitude to Sharad Rao (Sharad Pawar). He reached out to political leaders to persuade them to take part in the ‘all-party meeting’. He, along with TMC and other parties, attended the meeting. The crisis was on the entire humankind; still, you boycotted the meet,” PM Modi said, with his attacks aimed at Congress, which had skipped the all party meeting on COVID-19 management last year.

PM Modi also said that he had been shocked to see some Members saying that India’s vaccination drive is not a big deal. “At the same time, I want to assure everyone that till the pandemic exists, we will protect the poor of the nation,” PM Modi said.

He said that the government worked for the people irrespective of their caste, creed, and religion. PM Modi slammed the Opposition for adopting a confrontationist approach even when the government is working for the welfare of the people. “The mindset that being in the Opposition means creating hurdles for welfare measures is wrong,” he added.

Prime Minister also hailed the Startup eco-system, saying the number of unicorns in India within a year has surpassed the total unicorns created in India ever.