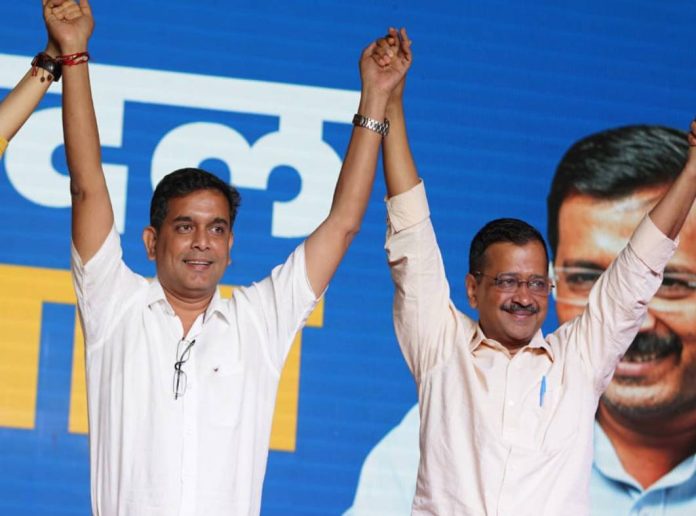 Ahead of Assembly Elections in Goa, the Aam Aadmi Party (AAP) candidates on Wednesday signed a legal affidavit and took a pledge to remain loyal to the party.

The candidates further pledged that they will work honestly if they are elected in the upcoming polls. Goa chief ministerial candidate Amit Palekar administered the oath to all candidates.

Kejriwal said, “I believe today is an extremely important day in Goa’s politics. The two major problems in the way Goa has been governed are – One, there is flagrant corruption. Goa’s government is one of the richest state governments in the country. Despite this, the people of Goa are deprived of basic amenities, the list of public grievances is endless because all the money goes into the pockets of politicians – gets stolen from the people of Goa.

“Two, the major problem of defection. No matter which party’s ticket a leader contests from, they immediately switch parties after winning. In the past few elections, we have witnessed politicians contesting from other parties and defecting to BJP after winning. This is pure cheating, and voters are being betrayed – because the politicians earn their votes in the name of a party in which the public places its trust and then by switching parties, they sell the votes of the people.”

Kejriwal further said that under this affidavit all our candidates promise that if they win they will work with utmost honesty, will not take any bribes or indulge in corruption and they will also not leave the Aam Aadmi Party to join any other political party.

“We have very selectively handpicked our candidates, done a background check on their public image and character to make sure they are honest and loyal. This affidavit is simply paper to prove their honesty. One should not simply be honest, but also appear honest in people’s eyes. Because the public doesn’t easily believe that the government can function with honesty. So, in order to earn the public’s trust, this affidavit is being signed and distributed. In a way, this is an assurance to the people that if the candidate falters, and is dishonest in their work, they can file a case against them on grounds of breach of trust, or for signing a false affidavit. Through this, we are handing the power over to the public of Goa.”

Goa will go to the Assembly polls on February 14. The counting of votes will take place on March 10.