Under the lights on Rod Laver Arena, the legendary Spaniard looked down and out against Daniil Medvedev. With his dramatic victory, Nadal has claimed sole ownership of the record for the most men’s singles Grand Slam titles, moving past Roger Federer and Novak Djokovic who are both on 20 major crowns.

“WHAT A MATCH! TO MY FRIEND AND GREAT RIVAL @RAFAELNADAL, HEARTFELT CONGRATULATIONS ON BECOMING THE FIRST MAN TO WIN 21 GRAND SLAM SINGLES TITLES. A FEW MONTHS AGO WE WERE JOKING ABOUT BOTH BEING ON CRUTCHES, AMAZING, NEVER UNDERESTIMATE A GREAT CHAMPION. YOUR INCREDIBLE WORK ETHIC. DEDICATION AND FIGHTING SPIRIT ARE AN INSPIRATION TO ME AND COUNTLESS OTHERS AROUND THE WORLD. I AM PROUD TO SHARE THIS ERA WITH YOU AND HONORED TO PLAY A ROLE IN PUSHING YOU TO ACHIEVE MORE, AS YOU HAVE DONE FOR ME FOR THE PAST 18 YEARS. I AM SURE YOU HAVE MORE ACHIEVEMENTS AHEAD BUT FOR NOW, ENJOY THIS ONE!” Roger Federer wrote on his Instagram story. 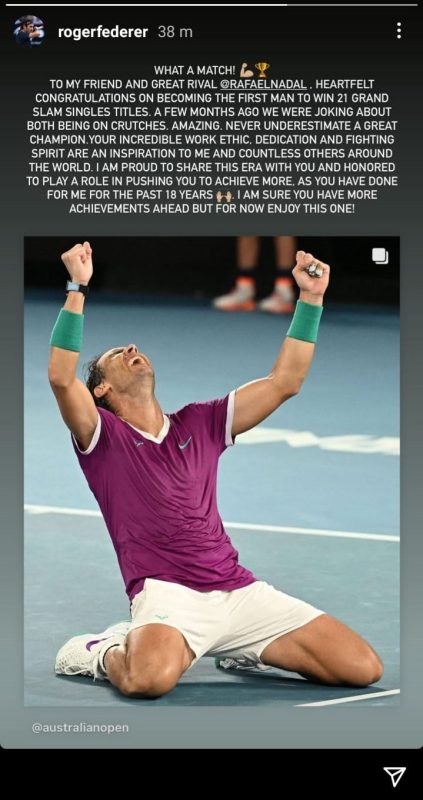 Wishes started coming in on Twitter as well congratulating world no 6. From Sachin Tendulkar to AB de Villers, here are all the reactions that poured in:

That is absolutely magnificent. Stunning to say the least.

From 2 sets down to come back and win your 21st Grand Slam is incredible.

Congratulations to @RafaelNadal for 21st GS. Amazing achievement. Always impressive fighting spirit that prevailed another time. Enhorabuena 👏🏆👍 @Medwed33 gave it his all out there and played with the passion and determination we have come to expect from him. pic.twitter.com/DsOvK8idNc

Rafael – Fire 🔥hai Fire .
What an incredible comeback, what a champion #RafaelNadal pic.twitter.com/5aNFTRP1wc

Rafa always shows us what Sport is all about. Respect for his opponent and the game, incredible fight till the end, and humility irrespective of his achievements. Legend

Wow @RafaelNadal. What an athlete! What a player! Congrats on 21 🏆