Home Nation Amar Jawan Jyoti Not Being Extinguished, Being Merged With Flame At National... 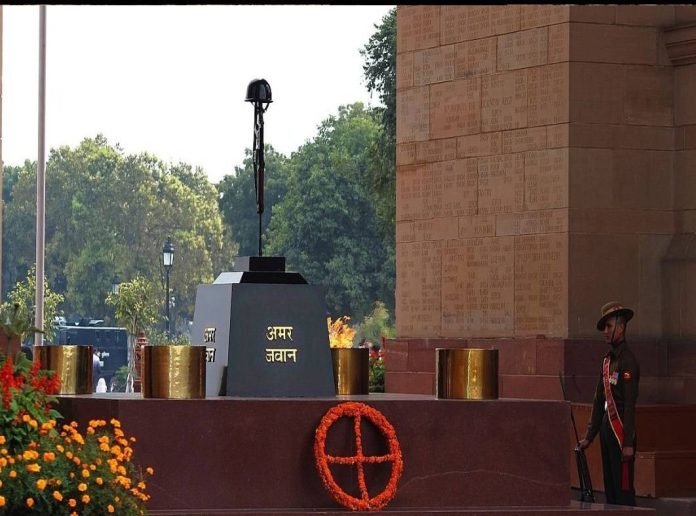 Several political leaders including Congress leader Rahul Gandhi have questioned the Central Government’s intent in shutting the Eternal Flame at Amar Jawan Jyoti at India Gate in the national capital and instead of putting a permanent one at the National War Memorial. The Government sources on Friday said that a lot of misinformation is being spread with regards to the same and it clarified that the flame of the Amar Jawan Jyoti is not being extinguished. It is being merged with the flame at the National War Memorial, the sources said.

It said that the flame at Amar jawan Jyoti paid tributes to the martyrs of 1971 and other wars however none of the names who made that supreme sacrifice for the country were present there.

“It was an odd thing to see that the flame at Amar Jawan Jyoti paid homage to the martyrs of the 1971 and other war heroes but none of their names are present there but now the names of all Indian martyrs from all the wars, including 1971 and wars before and after it are housed at the National War Memorial. This would be a true tribute to our fallen heroes,” the sources added.

The Central Government lashed out at the Congress party which was in power for close to 7 decades, however, did not even think of making the iconic National War Memorial (NWM), something that present-day Prime Minister Narendra Modi did in his very first term in office in January 2019. NWM was inaugurated in February 2019.

Earlier, Congress leader Rahul Gandhi had slammed the Central Government over its decision to extinguish the Amar Jawan Jyoti at India Gate.

Taking to Twitter, the Congress MP said, “It is a matter of great sadness that the immortal flame that used to burn for our brave soldiers will be extinguished today. Some people cannot understand patriotism and sacrifice – never mind. We will once again light the Amar Jawan Jyoti for our soldiers.”

The Amar Jawan Jyoti flame at the India Gate would be extinguished and merged with the flame at the National War Memorial today.

“The Amar Jawan Jyoti flame at India Gate will be extinguished and merged with the flame at the National War Memorial on Friday in a ceremony,” said an Indian Army official to ANI on Thursday.

The ceremony would be presided over by the Integrated Defence Staff chief Air Marshal Balabadhra Radha Krishna who would merge the two flames, officials said.

The India Gate memorial was built by the British government in memory of the British Indian Army soldiers who lost their lives between 1914-1921.

However, the Amar Jawan Jyoti was included in the memorial structure in the 1970s after the massive victory of India over Pakistan in which 93,000 troops of the enemy country surrendered.

After a long wait and multiple considerations, the National War Memorial was built in the India Gate complex by the Narendra Modi government and was inaugurated in 2019.
After the inauguration of the building in War memorial, all military ceremonial events were shifted to it from the India Gate memorial.

The National War Memorial has the names of all the Indian defence personnel who have lost their lives in different operations from the 1947-48 war with Pakistan to the Galwan valley clash with Chinese troops.

The names of troops who lost lives in the counter-terrorist operations are also included on the walls of the memorial.