Fact Check: 2010 Image Of Pipeline Construction From Germany Viral As That Of Recent Construction In Gorakhpur | Newsmobile
Monday, June 27, 2022 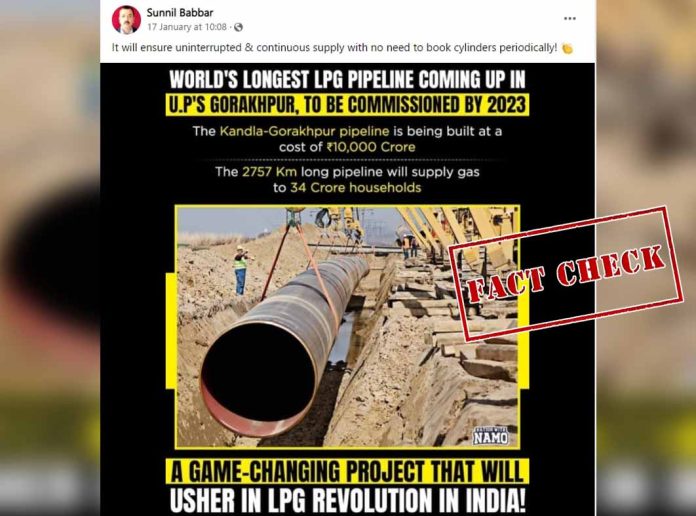 With assembly elections in five states just around the corner, political parties have gone full throttle on their respective election campaigns. Recently, as part of a digital campaign for BJP, a graphic has started doing rounds on social media. The graphic, which showcases picture of a huge gas pipeline is being shared with a claim that it is from Gorakhpur in  Uttar Pradesh.

The text on the graphic reads: “World’s longest LPG pipeline coming up in UP’s Gorakhpur, to be commissioned by 2023. The Kandla-Gorakhpur pipeline is being built at a cost of Rs 10,000 crore. The 2,757-km long pipeline will supply gas to 34 crore households. A game-changing project that will usher in LPG revolution in India!”

Facebook users shared the same with the text, “It will ensure uninterrupted & continuous supply with no need to book cylinders periodically!” 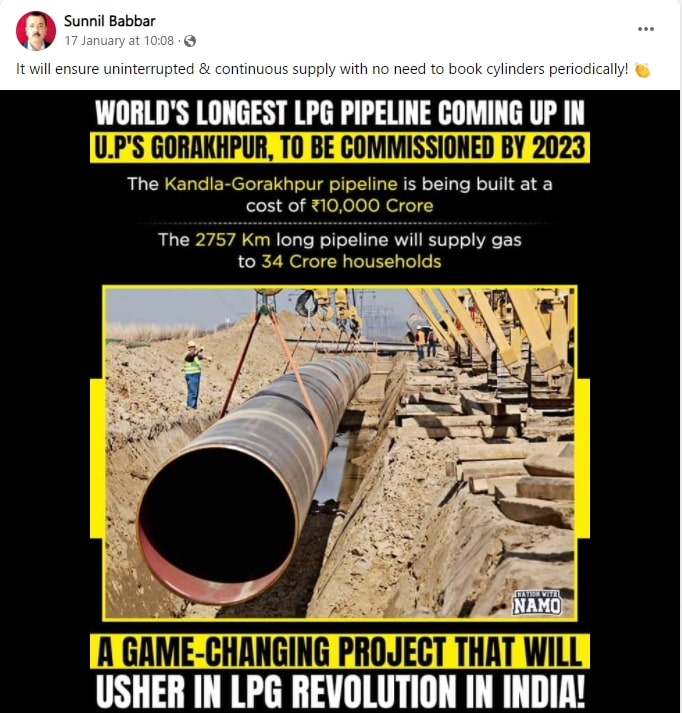 We ran a keyword search and found multiple reports from February 2019 about PM Modi laying foundation stone of the biggest LPG pipeline in the country. According to the report, ‘the state-owned Indian Oil Corp (IOC) is laying an LPG pipeline from Gujarat coast to Gorakhpur in eastern Uttar Pradesh to cater to the growing demand for cooking gas in the country.’

We then cropped the picture from the graphic and ran it through Reverse Image Search. We found the same image in an article by the New York Times dated April 8, 2010.

“Cranes lower a section of pipe into the ground near Lubmin, Germany.Credit…Sean Gallup/Getty Images,” the picture was captioned. 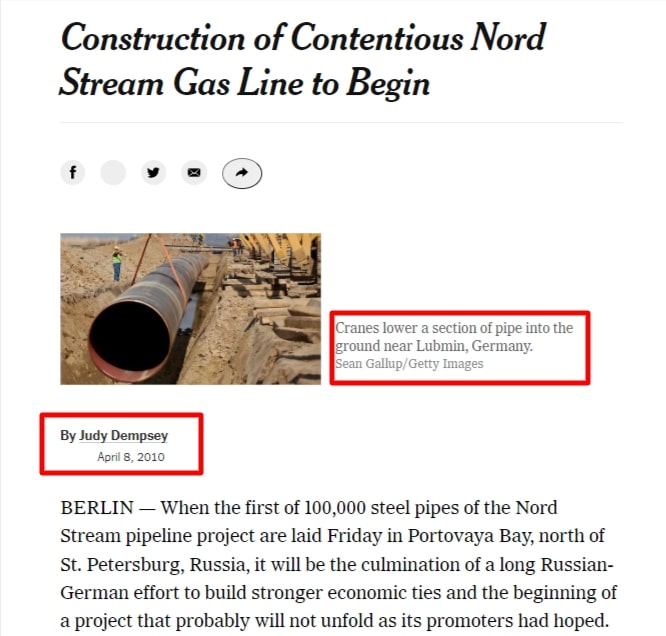 We searched and found the original image on the website of Getty Images. 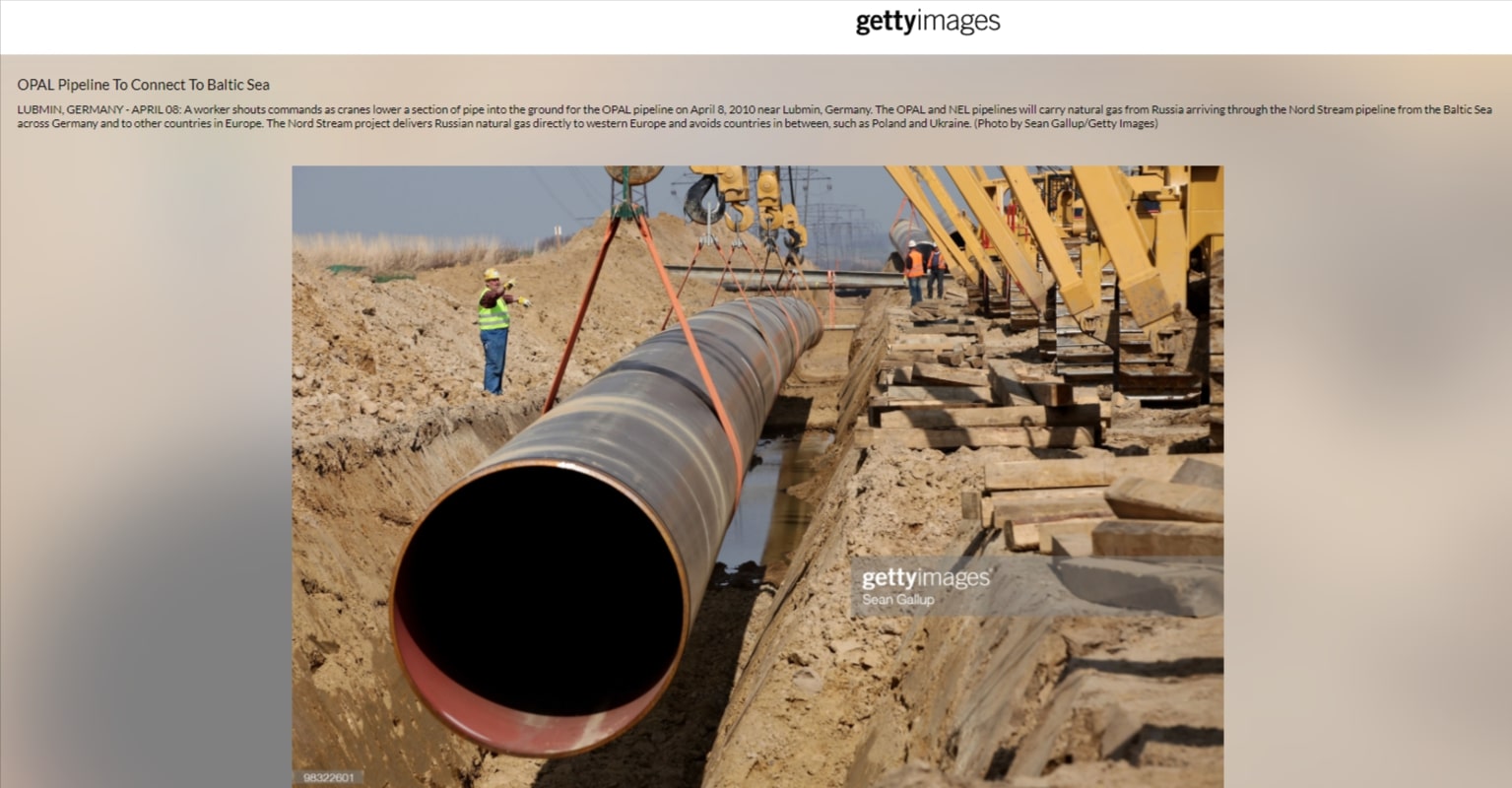 The image description read: “OPAL Pipeline To Connect To Baltic Sea
LUBMIN, GERMANY – APRIL 08: A worker shouts commands as cranes lower a section of pipe into the ground for the OPAL pipeline on April 8, 2010 near Lubmin, Germany. The OPAL and NEL pipelines will carry natural gas from Russia arriving through the Nord Stream pipeline from the Baltic Sea across Germany and to other countries in Europe. The Nord Stream project delivers Russian natural gas directly to western Europe and avoids countries in between, such as Poland and Ukraine. (Photo by Sean Gallup/Getty Images)”

Hence, from the above information, we can conclude that a decade-old image from Germany is being passed off as a recent construction in Uttar Pradesh.