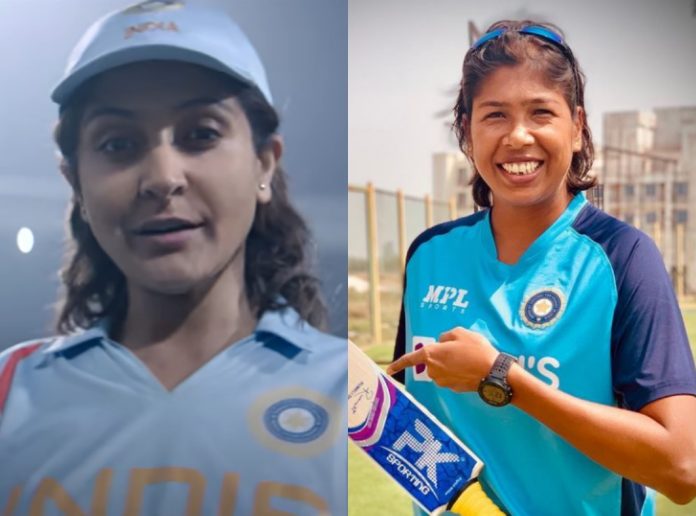 Anushka Sharma has finally made a debut to the OTT world and has returned to the big screen after almost three-year break. The actress, known for her versatile acting skills, was last seen in ‘Zero’ in 2018.

On January 6, Netflix released a teaser for Anushka’s latest film, ‘Chakda Xpress’, in which she will play former Indian women’s team captain Jhulan Goswami. The film’s teaser had mixed reactions from netizens. While some were thrilled to see Anuskha after three years, others were unsatisfied by her brownface and Bengali accent.

‘Chakda Xpress’, as observed by the teaser, is a biopic with an astonishing plot, recounting the wonderful journey of Jhulan Goswami, one of the fastest female bowlers in world cricket history.

Anushka shared the minute-long teaser on her official Instagram and Twitter account, stating “Jhulan’s story is truly an underdog story in the history of cricket in India and the film is our celebration of her spirit.”

Anushka’s fans are excited to see her back on the big screen, several took to Twitter to praise the Chakda Xpress teaser.

Today is a very special day for the people living in Chakdaha.

Chakdaha Express is a biopic on Indian woman cricketer Jhulan Goswami. #AnushkaSharma in as #JhulanGoswami in #ChakdaXpress for Netflix. pic.twitter.com/NNF8fLyDIO

@AnushkaSharma is gonna be back with #ChakdaXpress helmed by my favourite @prosit_roy. Uff, can’t wait!

#ChakdaXpress
Just saw the trailer and this line made me
Kudos to the person who came up with it@AnushkaSharma @NetflixIndia
Wtf this hit hard pic.twitter.com/36Sy6GVgbs

Meanwhile, some on Twitter heavily criticized on casting of Anushka Sharma for a brownface and Bengali character, saying that there are plenty of Bengali actors who could have been chosen to play the role.

They could have easily hired some Bengali actress to portray Jhulan Goswami in Chakda Express but they hired Anushka Sharma, made her do brownface and her fake Bengali accent just sucks.

Why couldn’t a dusky actress be cast as JhulanGoswami in #ChakdaXpress ? Why take a supremely lighter slim actress and get her so bronzed up? Beyond me.

Jhulan Goswami to Director when she came to know that Anushka is playing lead role in her biopic : #JhulanGoswami #ChakdaXpress pic.twitter.com/xpK0V53uvc

So sorry but I’m low-key offended by that accent as a Bengali Do NOT come at me saying that Jhulan speaks like that or whatever. As a native Bengali this accent sounds like a caricature and I don’t think anybody who isn’t well versed with the language will understand https://t.co/lBurHCrUSP

Man she isn’t even looking half as similar as Jhulan Goswami. Neither in height nor in complexion. Even her Bengali accent is very cringe. https://t.co/TArsrAGWJA

Seems like the filmmakers thought Jhulan was a Probasi Bangali… https://t.co/2A1FCquAvz

Jhulan Goswami was honoured, and in contrast to what netizens are saying, she expressed her thoughts on the teaser in a twitter thread.

When you represent India, that’s all that is on your mind. Tum desh ke liye khel rahe ho, apne liye nahi. 11 women playing to place Team India’s name in history.

When you pull up on to the pitch to bowl, all you see is the opponent holding the cricket bat and the stumps you need to knock out.