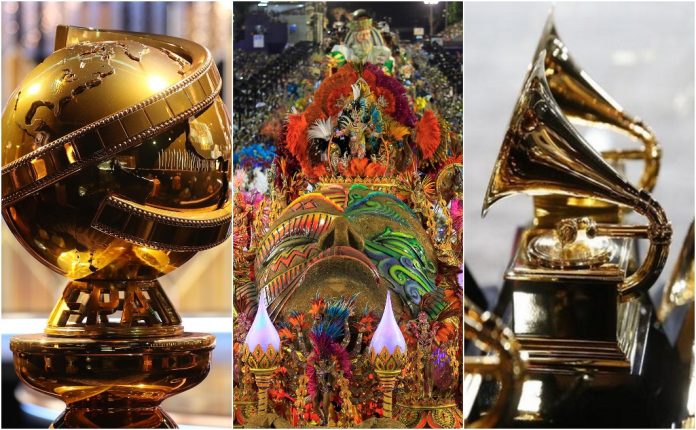 As the number of COVID19 cases continue to rise, fuelled by the spread of the Omicron variant, major events across the world are once again being canceled or postponed. The list includes events from the Grammy Awards to the BAFTA Tea Party.

Let’s have a look at the major events that stand postponed or canceled as COVID cases rise globally:

Grammy Awards: The increase of covid cases in the United States pushed the Grammy Awards organization to postpone the music award ceremony, which was initially scheduled for January 31 in Los Angeles. The new dates have not been announced yet.

79th Golden Globe Awards: The awards will be hosted in a very stripped-down arrangement in Los Angeles on Sunday; with no audience, media, celebrity guests, or red carpet. Only members and grantees with proof of vaccination and a negative test result will be permitted to attend the event. Guests will be required to adhere to mask protocols and keep social distance. The ceremony will not be live streamed, and the winners when announced will be posted on the Hollywood Foreign Press Association’s social media and website.

Rio Carnival: This year’s festival, which is set from February 25 to March 5, will be relatively subdued due to an increase in cases of the Omicron variant. The mayor of a Brazilian city said that while some significant Carnival festivities will take place, but the “blocos,” street gatherings will be canceled. The Sapucai Carnival, a parade of Rio’s Carnival schools, will still go ahead.

Chinese New Year: The celebrations which mark the start of the Lunar New Year on February 1st, have been strongly restricted due to an increase in infections. The occasion, which has long been known as the world’s largest annual human migration, sees millions of people return home, but residents have been advised to avoid traveling over the upcoming time. The Beijing Winter Olympics followed just after, providing a health concern for China due to the large number of international athletes visiting the country.

The BAFTA Tea Party: The annual BAFTA Los Angeles tea party, scheduled for today, January 8, has been cancelled. “In an abundance of caution, we have taken the difficult decision to halt our plans to host the Bafta Tea Party on January 8 in Los Angeles. We were anticipating gathering together in person. However, given the uncertainties around the impact, this current Covid-19 variant will have on our community, the prudent decision for Bafta and our attendees is to delay resuming these large-scale events in Los Angeles,” BAFTA said.