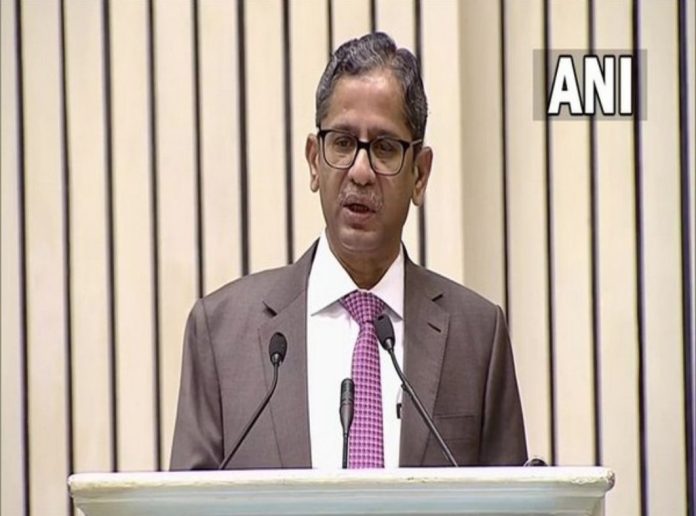 Chief Justice of India Justice NV Ramana on Wednesday said that freedom of the press is a sacrosanct Constitutional right, adding that there is no doubt that a healthy democracy can thrive only with a fearless and independent press.

“The freedom of the press is a sacrosanct Constitutional right. From the very beginning, the Supreme Court of India has upheld the freedom of the press as an important facet of our Constitution, from Sakal Papers and R. Rajagopal to Anuradha Bhasin. There is no doubt that a healthy democracy can thrive and survive only with a fearless and independent press. ” CJI said.

Pointing out that freedom comes with an enormous responsibility that must be borne by every individual who is part of the journalistic enterprise, the journalists, editors, and management, he quoted Justice Frankfurter, the judge of US Supreme Court, “Justice Frankfurter had said that the freedom of the press is not an end in itself but a means to the end of achieving a free society.”

As the Chief Justice of India, he restrained from commenting on specific issues that may be under judicial consideration and said “Let me simply say that the judiciary is a robust pillar. Despite all the constraints, it is working to further Constitutional goals.”

The recent trend to sermonize about judgments, and villainise judges, needs to be checked, the media must have belief and trust in the judiciary, he said. He appealed that as a key stakeholder in democracy, the media has the duty to defend and protect the judiciary from motivated attacks by evil forces. “We are together in the mission of Democracy and in promoting national interest. We have to sail together, ” CJI said.

“The freedom of the press is a valuable and sacred right enshrined in the Indian Constitution. Without such freedom, there cannot be discussion and debate that is essential for the growth of democracy. There can be no flow of information that the public requires, and that a democracy demands, ” he said.

CJI Ramana also raised concerns about incorrect reporting and said that social media amplifies that incorrect news in a matter of seconds, and once published it is difficult to take back.

CJI also said, “Another trend that I witness in reporting nowadays, is the seeping of ideological stances and biases into the news story. Interpretation and opinions are colouring what should be factual reports. News mixed with views is a dangerous cocktail. Connected to this is the problem of partial reporting, of cherry-picking facts to give it a particular colour.”

“Nothing can be more lethal to democracy than the deadly combination of confrontational polity and competitive journalism. Tragically, they feed on each other. History is witness to this hard truth, ” he added.

CJI Ramana also congratulated to all those who were being honoured in the function.
CJI Ramana was speaking at the Red Ink Awards for Excellence in Journalism. He also
paid tribute to all journalists who lost their lives while reporting from the ground during this pandemic. CJI also paid respects to the late Danish Siddiqui and said he was a man with a magical eye and was rightly regarded as one of the foremost photo-journalists of this era.