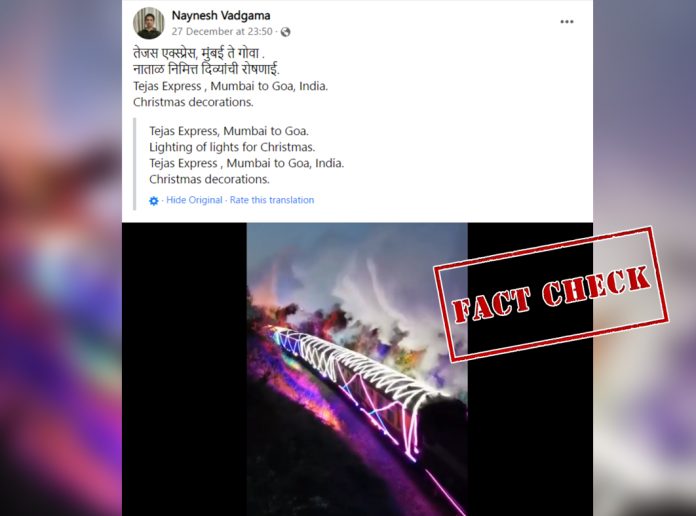 A video of a train decorated with colourful lights is being shared on social media with a claim that Mumbai-Goa Tejas Express was decorated for Christmas. 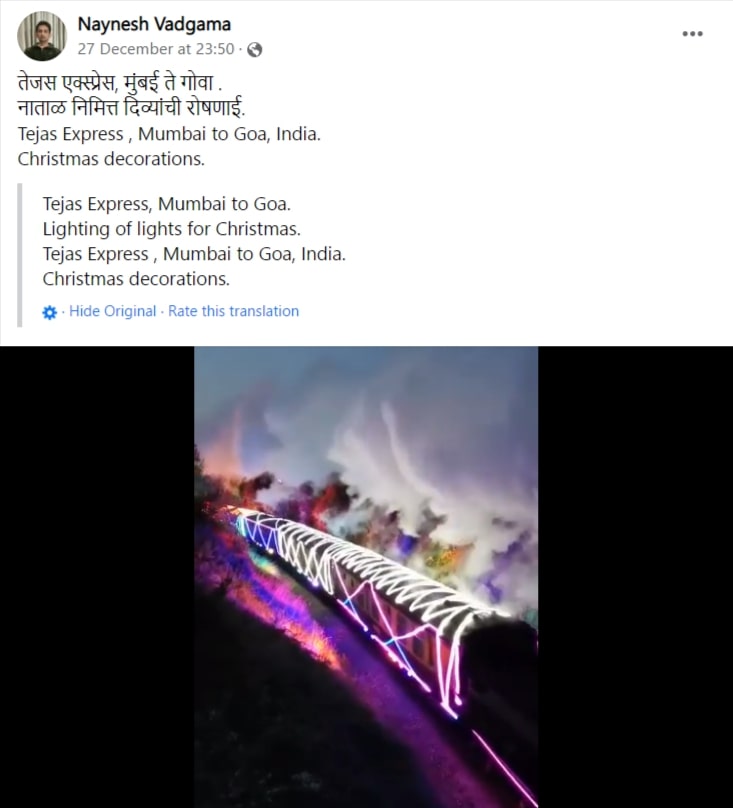 We extracted keyframes of the video and put them through Reverse Image Search. The search led us to the same video uploaded on YouTube by The Independent on December 3, 2021. “Mesmerising footage captures first official run of Train of Lights 2021,” the title of the video read.

The video description read, “This footage captures the first official run of the Train of Lights 2021 as it passes through and illuminates the countryside. Professional photographer Scott Williams, 47, and his excited toddler daughter, waited on a bridge to see the spectacular steam train thunder past. Footage shows the Dartmouth steam railway train covered front to back in Neon LED lights as it bellowed down the tracks. Scott filmed the amazing sight in the company of his two-year-old daughter, who can be heard saying “wow” in amazement, in the background.”

As per the description, the video was taken by photographer Scott Williams. Taking a Hint from this, we ran a search and found that the same video was shared on the Facebook page ‘Scott Williams Photography‘ on November 24, 2021.

The video was shared with the caption, “Good evening guys! No photos tonight just this short video of “The Train of Lights” chuffing through Goodrington, Paignton earlier this evening. It is a truly a magical sight watching it pass along the coast all lit up. Hoping to capture a few photos of the train on the countdown to Christmas.”

We also found multiple videos of Train of Lights on YouTube from 2019.

The description of the video uploaded by Dartmouth Steam Railway & River Boat Company read, “In 2018 we proudly presented the world’s first steam Train of Lights – and it was a huge success!!…Your truly spectacular illuminated journey starts at Queen’s Park Station, Paignton, where our train with vintage carriages await you – decorated with thousands of lights, both inside and out. Fifteen minutes later, once you’ve had time to settle back into your seat, you will arrive at Churston Station where the show begins. As the anticipation builds and minutes after leaving Churston, you will be propelled through the 450-metre Greenway tunnel that leads you to the enchanted forest which will be transformed by a multitude of lights and feature displays. The breath-taking show ends as you leave the forest only to be greeted by the twinkling lights of Dartmouth reflected on the river Dart. After a turnaround at Kingswear and with the opportunity to disembark and take photographs from the platform, you will be on your way back to Paignton to experience the spectacle from a different direction.​ ”

More information about the train and the journey is available on the website of Niles Canyon Railways.

Thus, from the above information, it is clear that the video is of ‘Train of Lights’ run by Dartmouth Steam Railway in England. Hence, the viral claim is false.