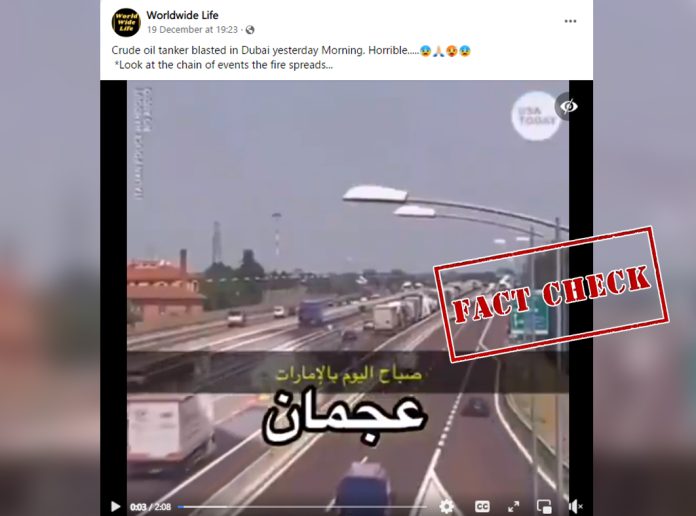 A video of a truck exploding after colliding with a vehicle is being shared on social media platforms linking it to a recent crude oil tanker blast in Dubai.

The video is being shared with the caption, “Crude oil tanker blasted in Dubai yesterday Morning. Horrible…..Look at the chain of events the fire spreads…” 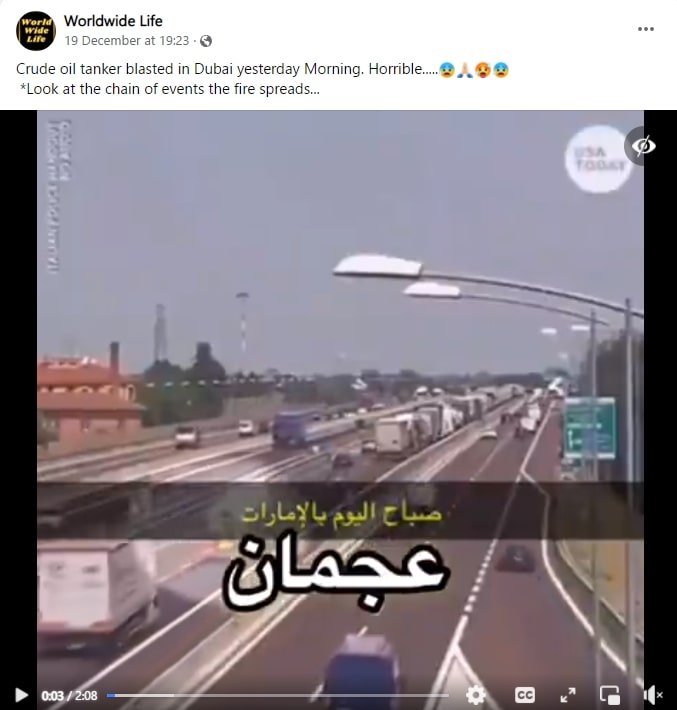 While examining the video carefully, we noticed that it consists of four separate clips. We fact-checked each of the clips individually and found the following:

In the first clip, the watermark of USA Today was present at the top right corner of the video. Taking a cue, we ran a search and found the same video uploaded on their website on August 7, 2018. 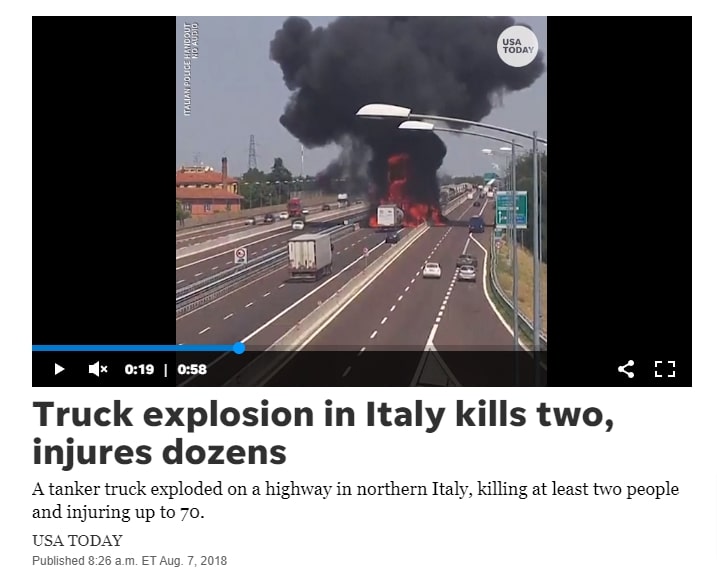 “A tanker truck exploded on a highway in northern Italy, killing at least two people and injuring up to 70,” the video description read.

The same video was also uploaded by NBC News on August 6, 2018. Daily Mail shared the same video with the description, “CCTV footage shows the petrol tanker driving straight into the vehicles in front at high speed, immediately catching fire on the motorway bridge near Bologna airport, Italy. Some time later, when surrounding unharmed vehicles have been evacuated from the motorway bridge, the burning vehicles cause an almighty explosion. Police have named the deceased as the tanker’s 41-year-old driver, and has said 70 people were injured, some with serious burns.”

Hence, it is clear that the first clip is of a 2018 accident in Italy.

We ran a Reverse Image Search on the keyframes of the video and found that the same video was uploaded by The Telegraph on YouTube on July 16, 2020. According to the video title, it’s from Egypt and the incident took place due to a ruptured crude oil pipeline.

The description read, “A ruptured crude oil pipeline set off a huge fire on a desert road in Egypt, injuring 12 people. Flames and clouds of dense, black smoke billowed over the road that stretches from capital Cairo to the city of Ismailia on the Suez Canal. Egypt’s health ministry said 12 people suffering burns and smoke inhalation were rushed to hospital for treatment and all hospitals near the site were preparing to receive more casualties.”

Global News also uploaded the same video in July 2020 with the title, “Cars set ablaze after massive fire breaks out along pipeline in Egypt.”

This proves that the video is from Egypt.

In the third video clip, we noticed ‘Belad Al Sham’ written on one of the buildings. 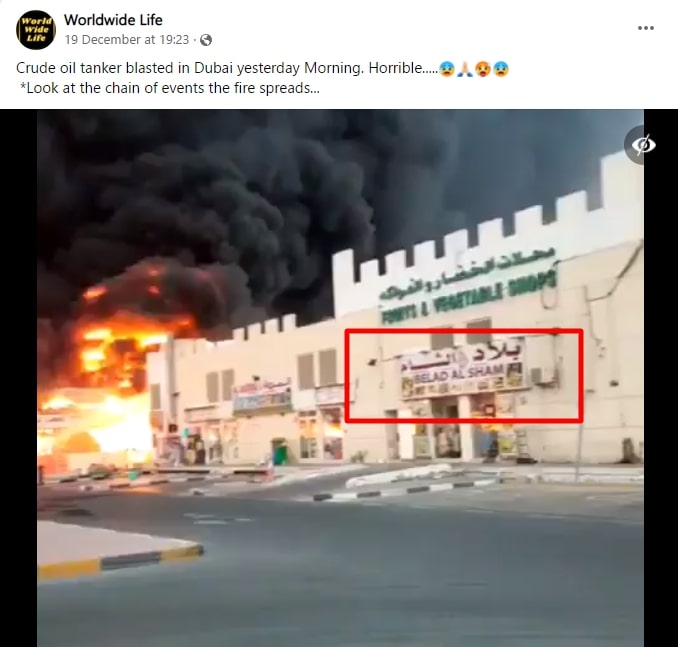 Taking a hint, we ran a search and found that it is a shop in Ajman, a small state in the United Arab Emirates.

We ran another keyword search and found multiple reports of a massive fire in a market in Ajman in August 2020. The reports can be seen here and here. 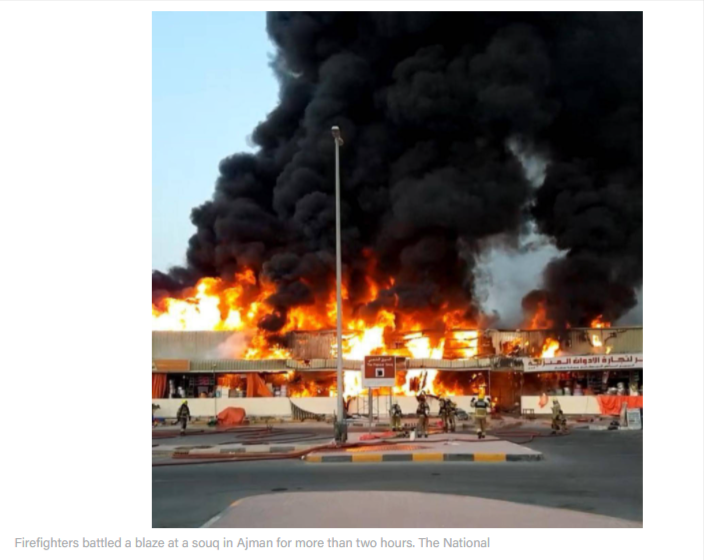 Thus, it is clear that the third video is from Ajman, UAE.

A search on the keyframes of the fourth video took us to a report by Daily Mail from February 2019. “Horrifying moment train ‘going full speed’ slams into the platform at Cairo rail station and EXPLODES leaving dozens dead and scores injured,” the headline of the report read. 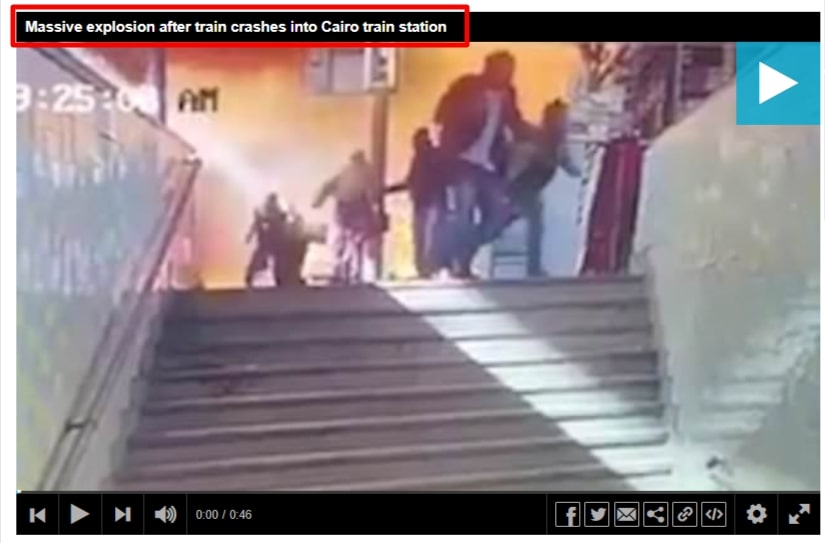 The same was covered by Al Jazeera in 2019. According to the report, “at least 20 people have been killed and 50 injured after a train smashed into a barrier at Cairo’s main train station.”

Thus, on the basis of the above information, it is clear four different clips of separate accidents in different countries have been stitched together and being shared with a false claim linking it to recent oil tanker blast in Dubai.