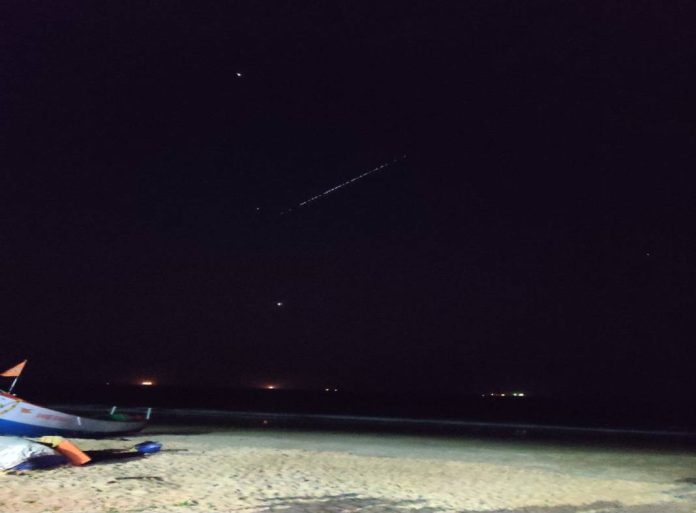 Newsmobile’s Yusha Rahman spotted a pearl-like object train in the sky in Surathkal in Dakshina Kannada on Monday night.

Many who saw the spectacular sight of what looked like moving stars were astounded. Some thought they may be extraterrestrial objects or UFO.

It turned out to be Elon Musk’s Starlink satellite. It’s a spectacular sight since the satellite orbits at a level closer to Earth.

Here is all you need to know.

Starlink is a huge satellite system that aims to provide internet service to remotest areas of the earth.

Elon Musk’s company SpaceX has been developing these satellites since 2015.

They are launched in orbit in batches, as of now there are 13 batches that have been sent into space with 775 solar-power satellites orbiting the Earth.

SpaceX plans to build 12,000 satellite constellations with a further possibility of extending it up to 45,000.

You can check for Starlink on the Heavens-Above website. You can get predictions about Starlinks’ passes in the special section dedicated to these satellites.

On December 18, SpaceX announced the successful liftoff of 52 Starlink communication satellites into the Earth orbit. Earlier in the day, the US space company launched its Falcon 9 rocket from Vandenberg Space Force Base in California. Later, its first stage successfully landed on the Of Course I Still Love You droneship. “Deployment of 52 Starlink satellites confirmed,” SpaceX tweeted.

Department of Telecommunications, Ministry of Communications, had advised people against use subscribing to that ‘Starlink Internet Services’ as it is not licensed to offer satellite-based internet services in India being advertised to the public.

Starlink has stopped taking pre-orders for its devices citing the requirement of regulatory approval. However, Starlink Country Director, Sanjay Bhargava through his LinkedIn post announced that they will be applying for a commercial license on or before 31st January 2022.

Earlier, the satellites were also seen in the skies of Poonch, Rajouri and other areas of Kashmir on December 3, causing panic in the people of the place.

So now when you see a series of lights floating in the sky, don’t panic, it is nothing but satellite.

Fact Check: The Viral Video Showing Robbery Is Not from Tamil...