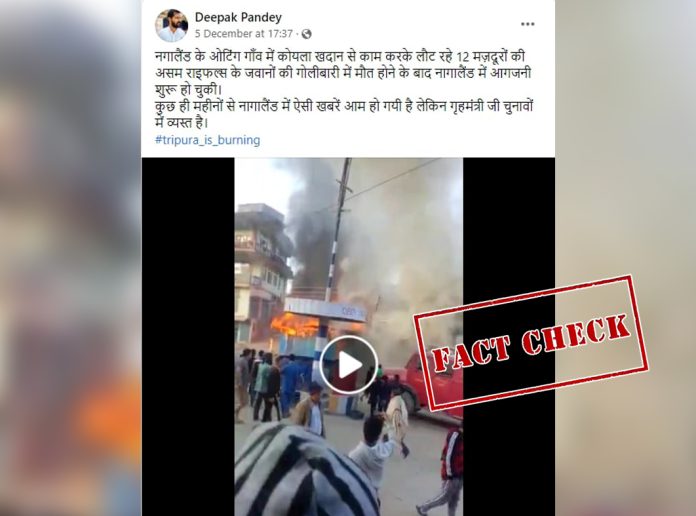 Thirteen people were killed in Nagaland recently after an army patrol mistakenly opened fire on miners returning home after work. The incident sparked a huge protest across the state.

In this backdrop, a video showing buildings on fire while firefighters can be seen dousing the flames is being shared on social media with a claim that the incident took place during the protests. 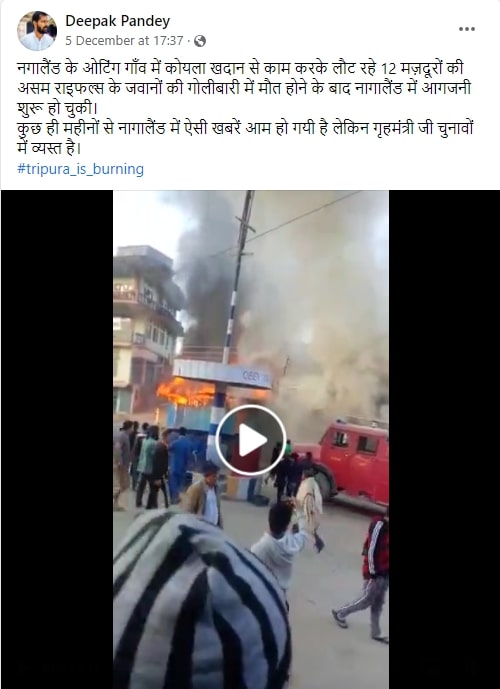 (English Translation: In Nagaland’s Oting village, arson broke out in Nagaland after 12 workers returning from a coal mine were killed in firing by Assam Rifles personnel. Such reports have become common in Nagaland for a few months, but the Home Minister is busy with elections. #tripura_is_burning)

We extracted the keyframes of the video using the InVid tool and put them through Reverse Image Search. The search led us to the same video, uploaded on YouTube on December 5, 2021.

The description of the video read, “Fire broke out at Bazaar point Tuensang ,due to suspected short circuit and burnt down atleast 3/4 shops.Now situation is under control.”

Videos of the same incident were uploaded on Facebook by a page named News 12 Assam North East on December 5.

The caption of the video read, “A massive fire broke out in a few shops at Main Police Point Market in Tuensang on Sunday afternoon at about 3:00 PM. There were no casualties, with business in the otherwise bustling market being down with huge loss of goods any cash worth lakhs and lakhs. Fire Brigade reached the spot within three minutes of being alerted, and the incident was brought under control. Smoke was visible from far and wide, sparking speculation about the extent and location of the fire.”

Taking a cue from this, we ran a keyword search and found a tweet by the handle of Tuensang Police, where it was clarified that the video is being shared with a false claim.

“It has been come to notice that some people are circulating rumours about fire at bazar point Tuensang Town. It has no connection with any other incident. Fire broke out due to suspected short circuit. Situation under control,” the tweet read. 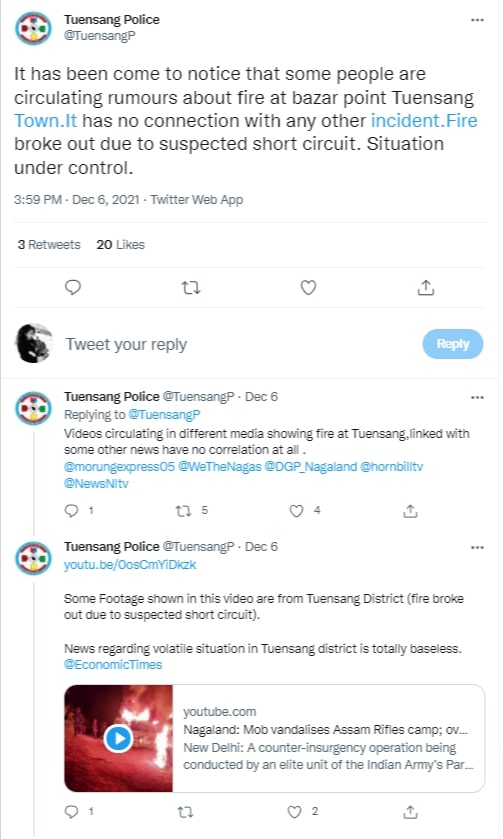 Hence, from the above information, it is clear that a video of a fire due to a short circuit is being shared with a false claim.