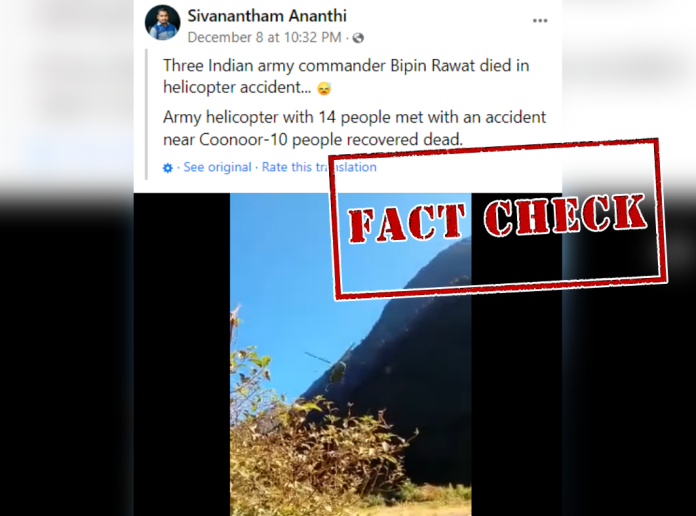 On December 8, 2021, a helicopter carrying CDS Bipin Rawat, his wife Madhulika Rawat and 12 other Defence personnel, crashed in Tamil Nadu’s Coonoor region, killing 13 persons on board. In this backdrop, a video claiming to show footage of the event has gone viral on social media.

The video is being shared on Facebook with a caption in Tamil that can be translated in English to, “Indian Army Commander Bipin Rawat dies in helicopter crash An army helicopter with 14 people on board crashed near Coonoor – 10 dead.” 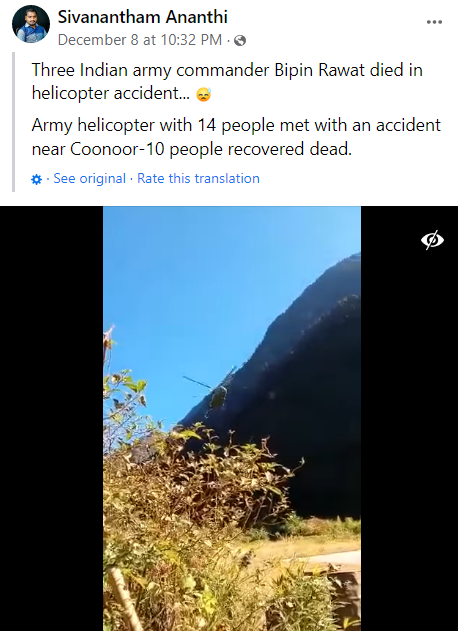 Starting with our investigation, we extracted keyframes from the video and performed a Reverse Image Search. This directed us to a video news report uploaded by Zee News on November 18, 2021, that carried the same viral video. The video description read, “The Indian Air Force Mi-17 helicopter that crash-landed in Eastern Arunachal Pradesh.”

Taking a cue from this, we did a keyword search and found news articles published by Republic, The Economic Times, Zee News in November that reported the same incident.

Searching further, we found the same viral video uploaded by ANI on November 18, 2021, with the caption, “#WATCH video of the Indian Air Force Mi-17 helicopter that crash-landed near a helipad in Eastern Arunachal Pradesh today with two pilots and three crew members. All of them are safe with minor injuries. (Source: a local person).”

#WATCH video of the Indian Air Force Mi-17 helicopter that crash-landed near a helipad in Eastern Arunachal Pradesh today with two pilots and three crew members. All of them are safe with minor injuries.

Thus, it is evident from the above information that an old video from Arunachal Pradesh is being falsely linked to CDS General Bipin Rawat’s chopper crash. Therefore, the above claim is misleading.