Home NM FACT CHECKER Fact Check: No, Priyanka Gandhi Has Not Made This Statement On ‘Namaaz... 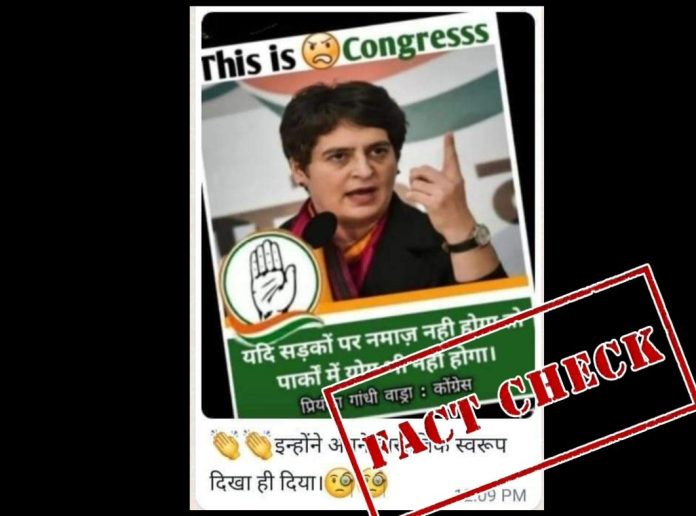 In the backdrop of the ongoing row over offering namaaz on Fridays on open grounds and in the run up to the Uttar Pradesh assembly elections scheduled early next year, many statements of leaders from various political parties have started doing rounds on social media platforms.

A couple of images are being widely shared on Facebook attributing the comment embedded with the picture to Congress leader Priyanka Gandhi Vadra.

(English translation: If there is no namaaz on the roads, then there will be no yoga in the parks.)

We ran a keyword search (using keywords – ‘Priyanka Gandhi’, ‘Namaaz’, ‘Road’, ‘Yoga’) but we could not find any credible source to authenticate the claim made by Priyanka Gandhi Vadra on the namaaz issue.

However, we did find media reports from May 2018 about a statement made by Congress leader Ajay Singh Yadav criticising Haryana chief minister Manohar Lal Khattar.

As per the Time Of India report, Yadav said: “Muslims have been offering namaaz in the open for over a decade in Gurugram and everything was smooth until now. With the 2019 polls approaching, they want to divide the society on religious lines. This is purely a political game to get the attention of Hindu voters. Instead of making such statements, the CM should allot places large enough for offering namaaz. They (Muslims) congregate on the streets because they do not have a place big enough. And why blame them alone? Don’t we do yoga in parks, and at times, have jagran on roads?”

A similar report was found on Jansatta dated May 8, 2018.

Further, we performed a Twitter advance search with the text ‘सड़कों पर नमाज नहीं होगी तो पार्कों में योग भी नहीं होगा’ on Priyanka Gandhi’s official handle but it did not show any results for such a quote.

Hence, it’s clear that a statement made by another leader in 2018 is being falsely attributed to Priyanka Gandhi Vadra with a communal spin.