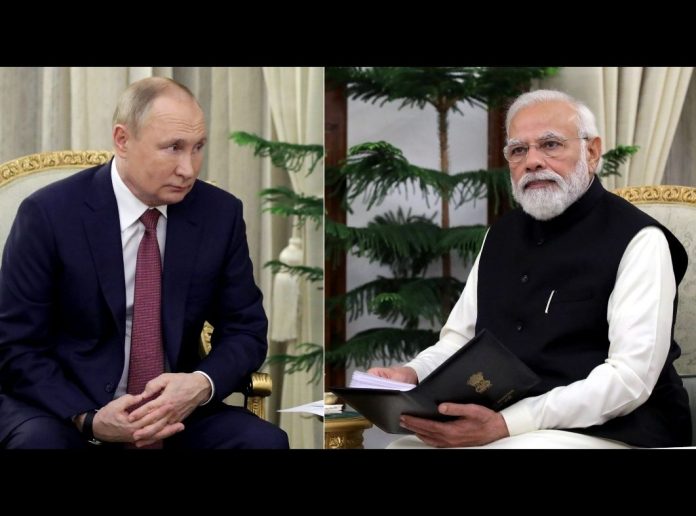 New Delhi: India and Russia on Monday signed 28 agreements and MoUs as the two countries held the inaugural 2+2 Dialogue of Foreign and Defence Ministers which was followed by talks between the visiting Russian President Vladimir Putin and Prime Minister Narendra Modi later in the day.

At a special media briefing, Foreign Secretary Harshvardhan Shringla said that President Putin as a brief working visit to New Delhi but which was “highly productive and substantive.’’

He disclosed that Russia has begun supplying of S-400 air missile defense system to India. Answering a query, Shringla said it was a legacy contract of 2018 and added “S-400 supplies have begun this month and will continue to happen.” Shringla said soon after Russian President Vladimir Putin’s visit to New Delhi earlier in the day.

“The fact that Russian President Vladimir Putin decided to visit India for our annual summit is an indication of the importance he attaches to the bilateral relationship and his personal rapport with Prime Minister Narendra Modi,” Shringla said at the briefing.

He said it was President Putin’s second visit out of Russia since the outbreak of the Covid-19 pandemic in 2020, the first was a brief visit to Geneva for the summit meeting with U.S. President Joe Biden.

The two leaders held in-depth discussions focussing on bilateral and multilateral cooperation. The Foreign Secretary said that 28 agreements and MoUs were concluded and inked between government to government and business to business sides of the two countries in diverse areas ranging from cyber security, trade, energy, culture to defence and Intellectual Property Rights.

He said the issue of cross-border terrorism and activities of terror outfits like Lashkar-e-Toiba, Al Qaeda, and ISIS and other terror-related activities in the region came up for discussions between President Putin and PM Modi and India’s concerns were also raised.

A comprehensive 99-point joint statement was issued at the end of the 21st annual summit between President Putin and PM Modi. President Putin was accompanied by a high-level delegation. The two leaders expressed satisfaction at the sustained progress in the ‘Special and Privileged Strategic Partnership’ between both countries despite the challenges posed by the Covid pandemic.

They discussed regional and global developments, including the post-pandemic global economic recovery, and the situation in Afghanistan. They agreed that both countries share common perspectives and concerns on Afghanistan and appreciated the bilateral roadmap charted out at the NSA level for consultation and cooperation on Afghanistan.

Both President Putin and PM Modi noted that both sides shared common positions on many international issues and agreed to further strengthen cooperation at multilateral fora, including at the UN Security Council.

The Joint Statement titled India-Russia: Partnership for Peace, Progress and Prosperity’’ covers the state and prospects of bilateral ties, reflecting the multifaceted nature of India-Russia ties.

President Putin extended an invitation to Prime Minister Modi to visit Russia for the 22nd India-Russia Annual Summit in 2022.