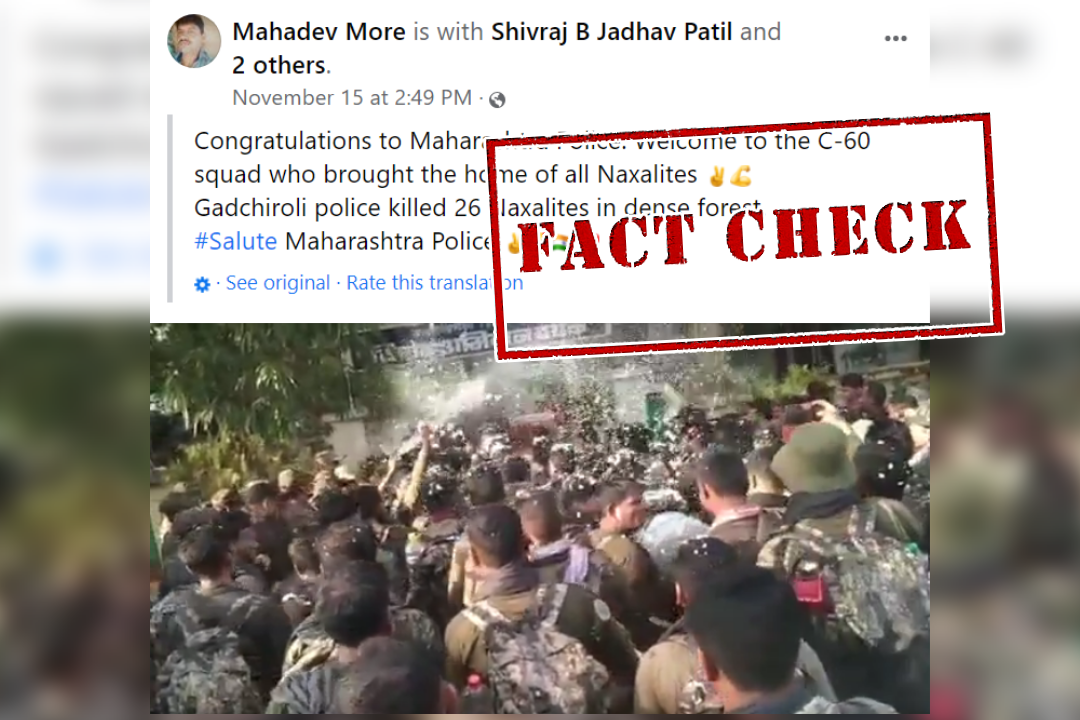 Central Committee Member of CPI (Maoist) and head of the newly-formed MMC zone (Maharashtra-Madhya Pradesh-Chhattisgarh confluence) Milind Baburao Teltumbde was  among the 26 red ultras killed in an encounter with Maharashtra Police which took place on November 13, 2021. According to reports the encounter took place in the deep forests near Dhanora in Gadchiroli district.

Against this backdrop, a video has gone viral on social media claiming to be of a grand welcome accorded to the elite C-60 commandos who killed 26 Naxalites in Gadchiroli, Maharashtra.

The video is being shared on Facebook with a caption in Marathi that can be roughly translated in English to, “Congratulations to Maharashtra Police. Welcome to the C-60 squad who brought the home of all Naxalites. Gadchiroli police killed 26 Naxalites in a dense forest. #Salute Maharashtra Police.” 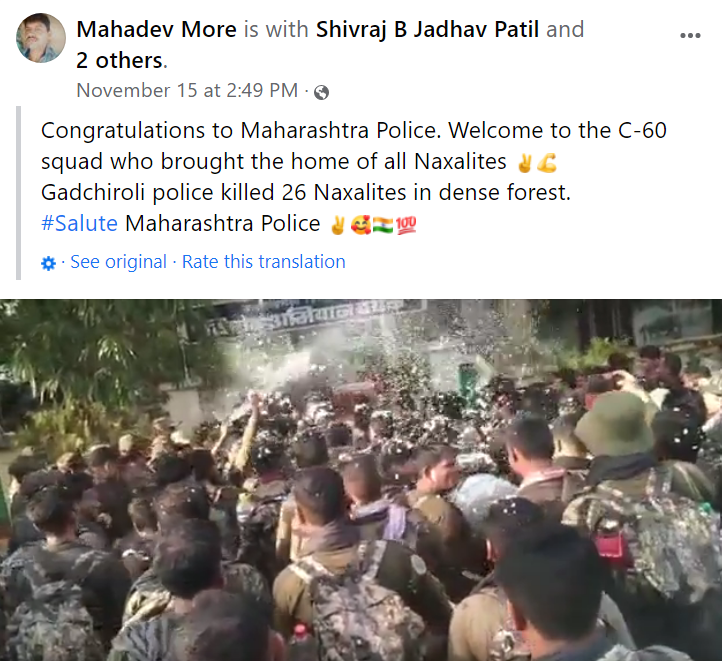 Using the InVid tool, we extracted keyframes from the viral video and performed a Reverse Image Search. This directed us to the official page of ETV Bharat that carried the longer version of the viral video on May 22, 2021. The video description reads, “After a successful encounter operation against banned outfits in Maharashtra’s Gadchiroli, C-60 commandos were welcomed by officials at police district headquarters with the ‘band baaja’.”

Taking a cue from this, we searched the web and found out that “13 Maoists were killed in a police encounter in Paithi forests in Maharashtra’s Gadchiroli district on Friday, 21 May.”

Below is the comparison between the viral video and the video uploaded by ETV Bharat on May 22.

Searching further, we found a tweet posted on the official Twitter of Gadchiroli Police that stated: Information:- It should be noted that some videos circulating on social media, in which C60’s jawans are seen chanting, have nothing to do with the current incident.

We also found a tweet posted by Gadchiroli SP Ankit Goel stating, “A video purportedly showing  C60 jawans celebrating is getting transmitted on SM. This is to clarify that it is an old video and not related to the recent encounter.”

A video purportedly showing C60 jawans celebrating is getting transmitted on SM. This is to clarify that it is an old video and not related to recent encounter.#GadchiroliPolice

Thus, it is evident from the above information that an old video is being falsely linked to the recent crackdown on naxals in Maharashtra’s Gadchiroli district. Therefore, the viral claim is misleading.