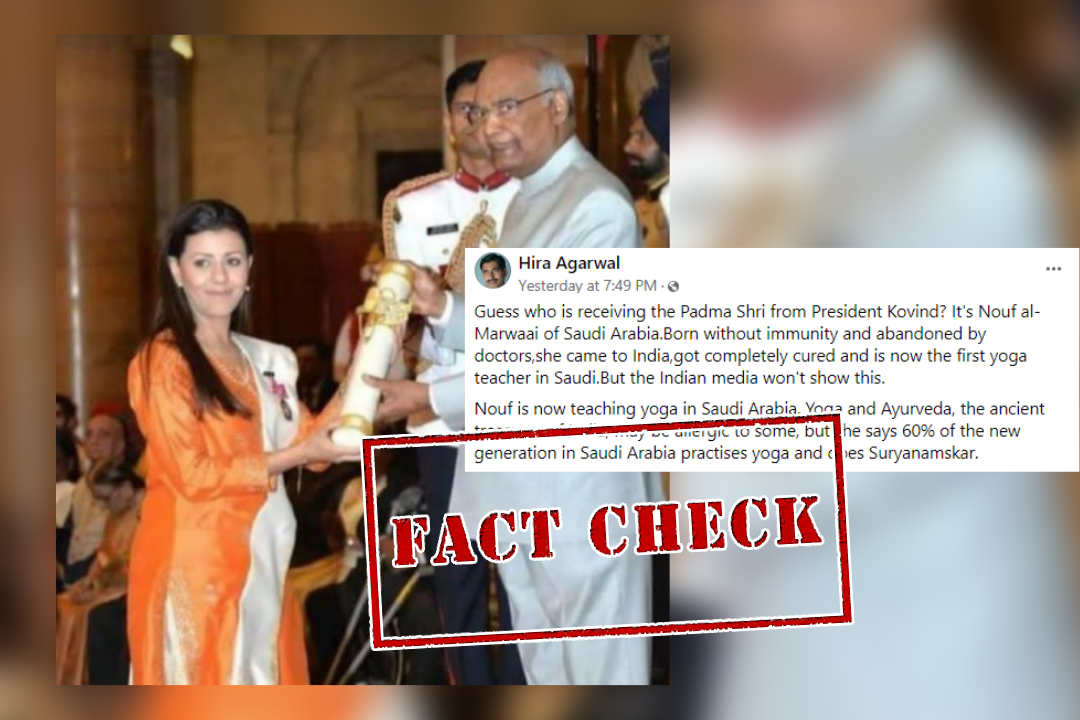 One of the highest civilian honours in India, the Padma awards, were conferred on 119 recipients on November 8 and November 9 in four separate ceremonies recently. President Ram Nath Kovind conferred the awards to shuttler PV Sindhu, footballer Oinam Bembem Devi, singer Pandit Channulal Mishra and journalist Lalbiakthanga Pachuau among others.

Sharing an image, social media users are claiming that a yoga instructor from Saudi Arabia, Nouf Almarwaai, was also honoured with Padma Shri this year, but due to fear of Islamic fundamentalists, Indian media did not report this news. In the image, President Ram Nath Kovind can be seen honouring her.

The image is being shared on Facebook with a caption that reads, “Guess who is receiving the Padma Shri from President Kovind? It’s Nouf al-Marwaai of Saudi Arabia. Born without immunity and abandoned by doctors, she came to India, got completely cured and is now the first yoga teacher in Saudi. But the Indian media won’t show this. Nouf is now teaching yoga in Saudi Arabia. Yoga and Ayurveda, the ancient treasures of India, may be allergic to some, but she says 60% of the new generation in Saudi Arabia practises yoga and does Suryanamskar.” 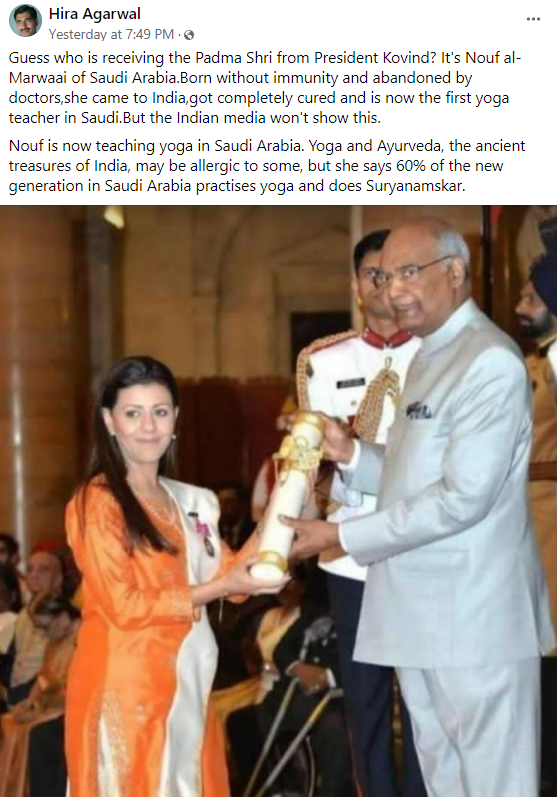 Doing a keyword search, we found that Nouf Almarwaai was awarded the Padma Shri in March 2018. The viral photo was tweeted from the Twitter handle of the President of India.

#PresidentKovind presents Padma Shri to Ms Nouf Almarwaai, first certified Yoga Instructor in Saudi Arabia. She played an instrumental role for legalising Yoga in Saudi Arabia. Born with an auto-immune disease, she overcame the challenge through Yoga and Ayurveda pic.twitter.com/GLWZaDlW0I

We also found her name in the Padma Awards 2018 list. She was awarded the Padma Shri for her exceptional work in the field of Yoga.

Searching further, we found many news articles published in 2018 that stated Nouf Almarwaai was declared Saudi Arabia’s first certified yoga instructor after nearly 20 years of struggle. Reports also mentioned that she received the Padma Shri in 2018 due to her efforts and struggle towards Yoga. 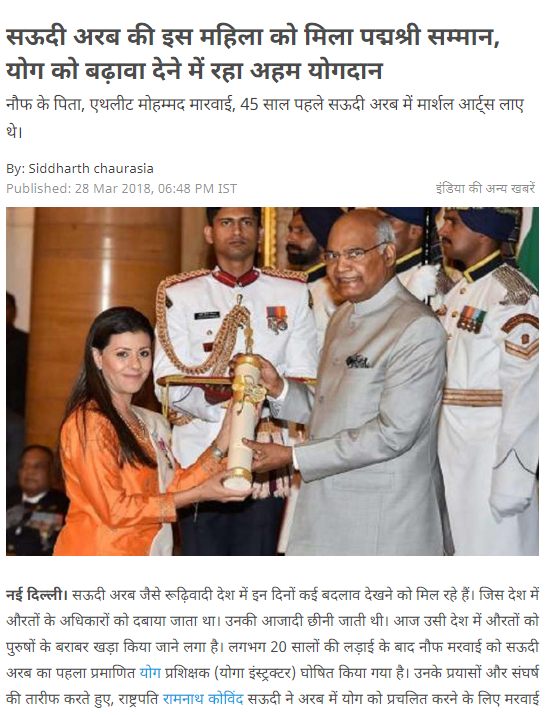 According to another news article, “Marwaai is an entrepreneur who has lived between Saudi Arabia and India for almost 11 years and has some businesses in both countries. She is also the founder of the Arab Yoga Foundation. Her health was one of the key reasons for entering the yoga world. Since her birth, Marwaai has suffered from many health issues and was not diagnosed properly until she was 17. During that year she was diagnosed with undifferentiated connective tissue disease and possibly rheumatic disease.”

Thus, it is evident from the above information that the news of Nouf Almarwaai receiving the Padma Shri Award in 2018 is being shared on social media as current.