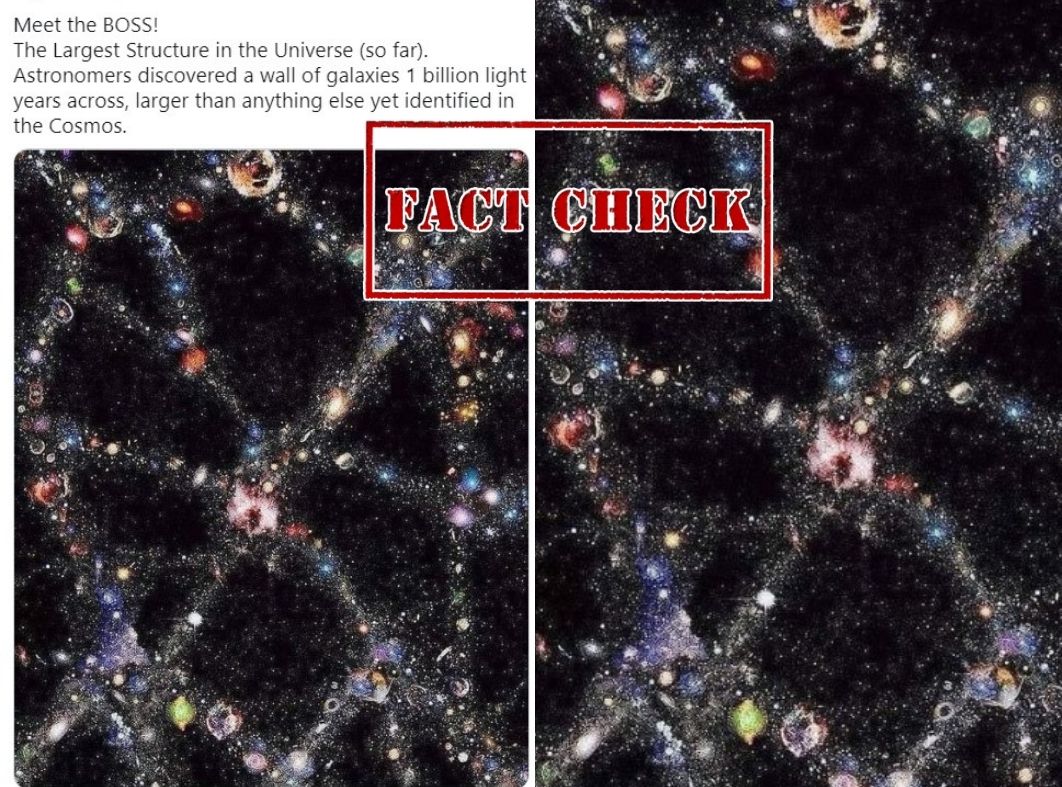 An image of what appears to be stars and galaxies is doing rounds on social media with a claim that it is of the ‘BOSS Great Wall’, which is the largest structure in the universe.

A Facebook user shared the image with a caption, “Meet the BOSS! The Largest Structure in the Universe (so far). Astronomers discovered a wall of galaxies 1 billion light years across, larger than anything else yet identified in the Cosmos. nowspacetime — at Cosmos.” 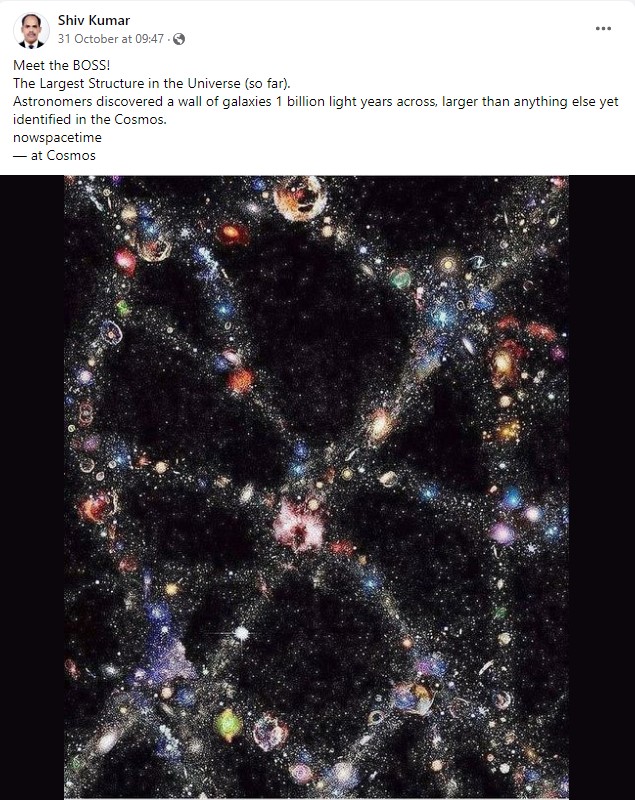 The same is also doing rounds on Twitter with the same caption. 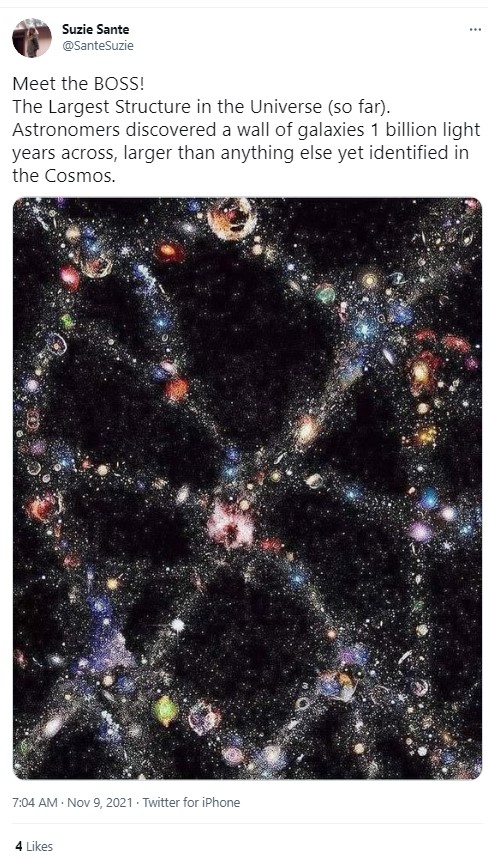 NewsMobile fact-checked this viral image and found it to be shared with a false claim.

With the help of Reverse Image Search, we found this image in an article published on Smithsonian Magazine’s website on March 10, 2016.

As per the report, the image is a digital artwork and not real. The caption with the cover image reads, “An illustration of galaxy superclusters and cosmic voids, similar to the structure of the BOSS Great Wall Science Photo Library/Corbis.” 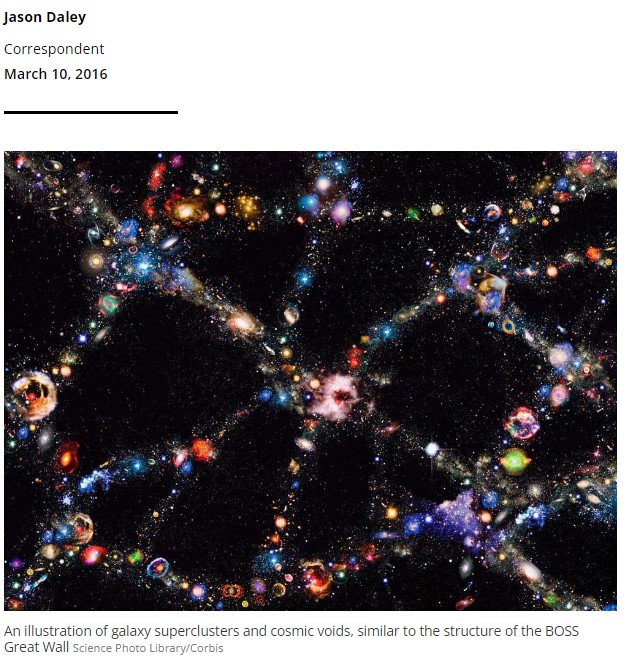 On checking further, we found this illustration on the website of the Science Photo Library with the label ‘Galaxy distribution, computer artwork’. The picture has been credited to  artist Mehau Kulyk.

“Galaxy distribution. Computer artwork of the distribution of galaxies in the Universe, appearing like foam on ocean waves. Galaxies are not randomly distributed in space but are collected into clusters. These are in turn connected to form superclusters. This leaves voids, which can be hundreds of millions of light-years across, that are empty of stars. The distribution of galaxies is a result of the Big Bang, the creation of the Universe. Cosmologists are unsure of the exact mechanism but some believe that galaxies may have formed in ripples of higher density in the early Universe,” reads the caption. 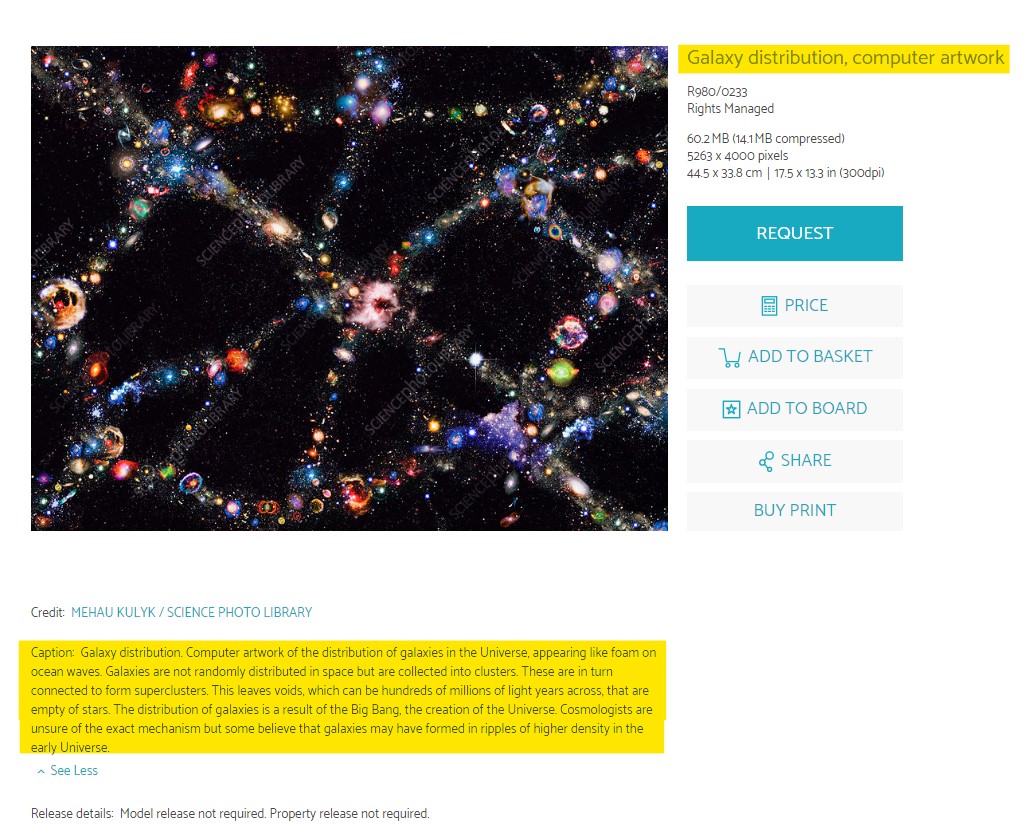 Therefore, a computer artwork is being falsely shared as a real image of the BOSS Great Wall.

What is BOSS Great Wall?

In 2016, scientists reportedly identified the largest object in the universe, the BOSS Great Wall. It is said to be the largest supercluster of galaxies in the universe. It was named after the Baryon Oscillation Spectroscopic Survey.

The BOSS Great Wall is said to be made up of 830 separate galaxies, which gravity managed to combine into four superclusters.

As per Sky News, the BOSS is two-thirds bigger than the previous record-holder, the Sloan Great Wall, which was discovered in 2003.