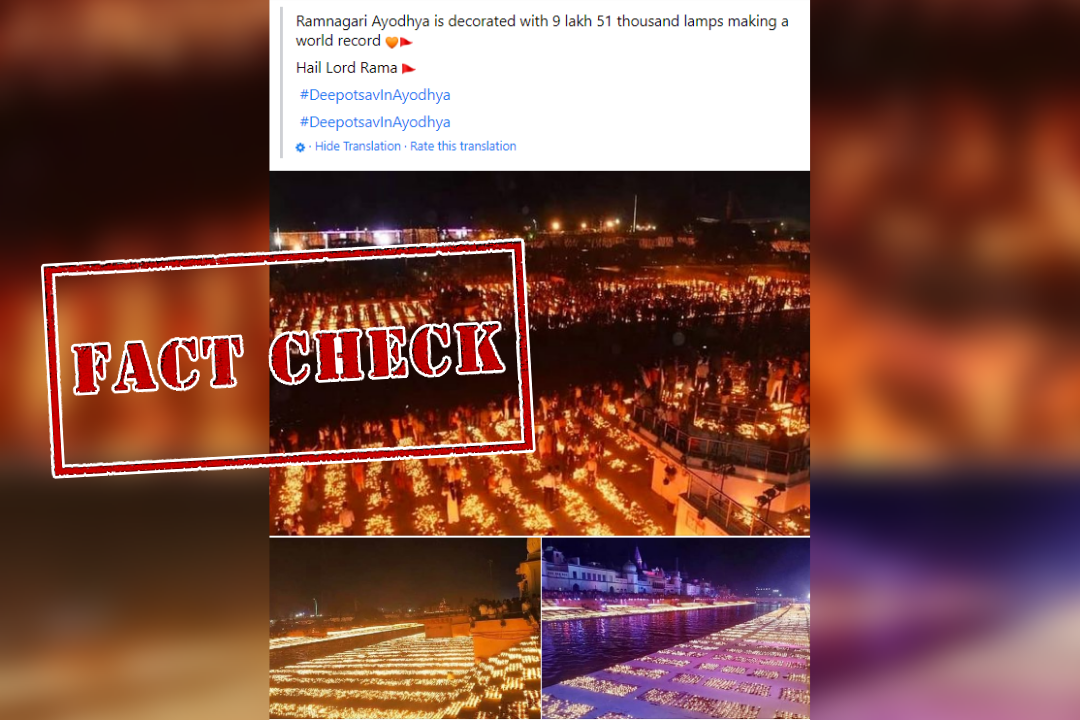 On the eve of Diwali on November 3, the Yogi Adityanath government in Uttar Pradesh lit 12 lakh diyas on the occasion of ‘Deepotsav 2021’ and entered the Guinness Book of World Records once again. On this occasion, 9,51,000 earthen lamps were lit on the banks of Saryu river in Ayodhya while 50,000 diyas were lit at the site of the Ram Temple and the rest were lit in other temples across the state.

In this backdrop, three images showing lit up earthen lamps on a riverbank are being shared on social media with a claim that they represent the 9,51,000 lamps lit in Ayodhya, making it a world record.

The set of three images is being shared on Facebook with a caption in Bengali that can be roughly translated in English to, “Ramnagari Ayodhya is decorated with 9 lakh 51 thousand lamps making a world record. Hail Lord Rama.” 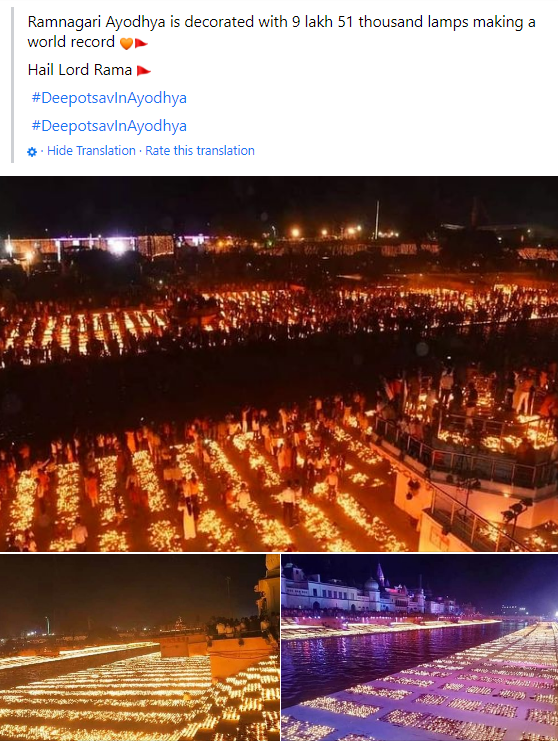 We performed a Reverse Image Search on all the three images and found that they are old and not related to recent Diwali celebrations in Ayodhya.

A Reverse Image Search on the first image directed us to a news article published on October 27, 2019, which carried the same viral image. The image description read, “Devotees lit up (diyas) earthen lamps on the banks of Saryu during Deepotsav celebrations in Ayodhya on Saturday.” The article reports Diwali celebrations in Ayodhya in 2019. 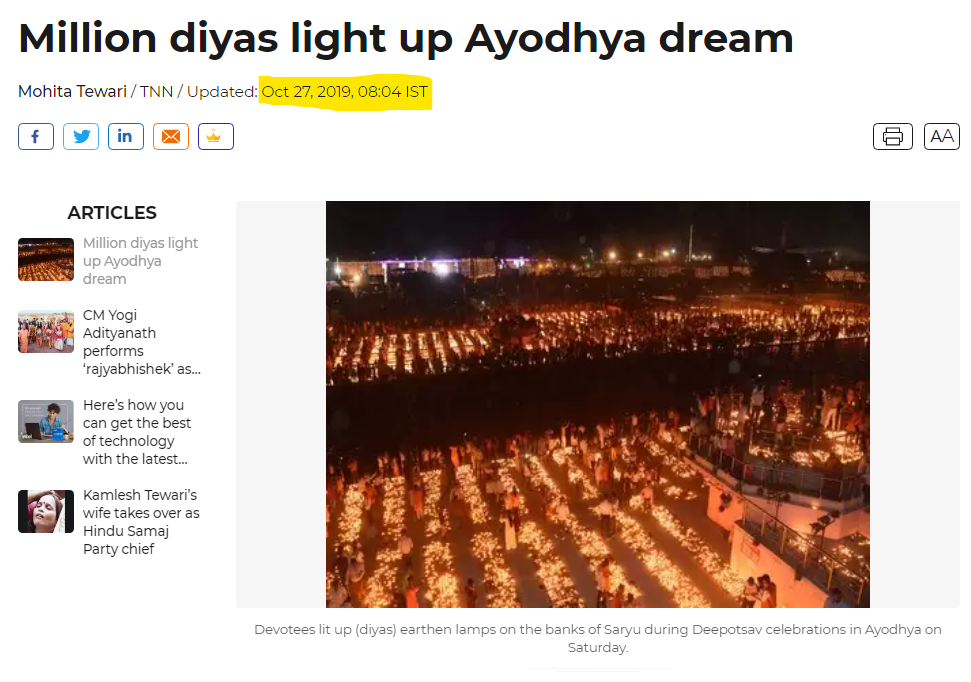 Doing a Reverse Image Search on the second image directed us to a news article published on October 27, 2019, that carried the same viral image. The article read, “A new history was created at Ayodhya as a record 6 lakh earthen lamps lit up the Saryu river bank on the eve of Diwali.” 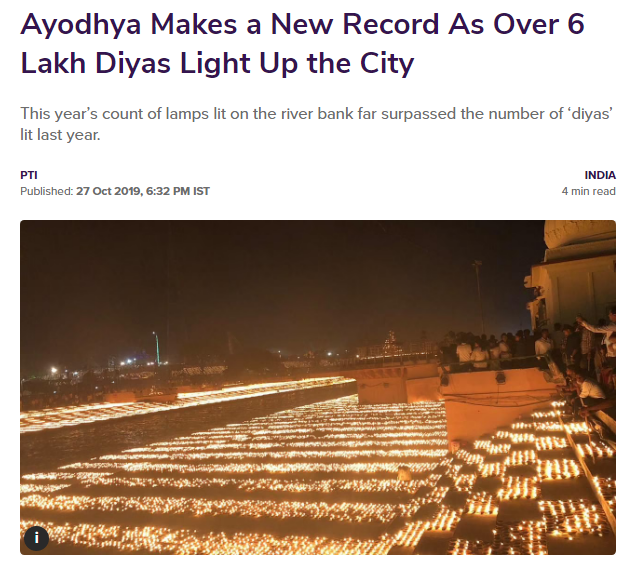 A Reverse Image Search on the third image directed us to a news article published on October 26, 2019, which carried the same viral image. The image description read, “Thousands of people were seen at Ram Ki Paidi which was lit up in pink purple.” 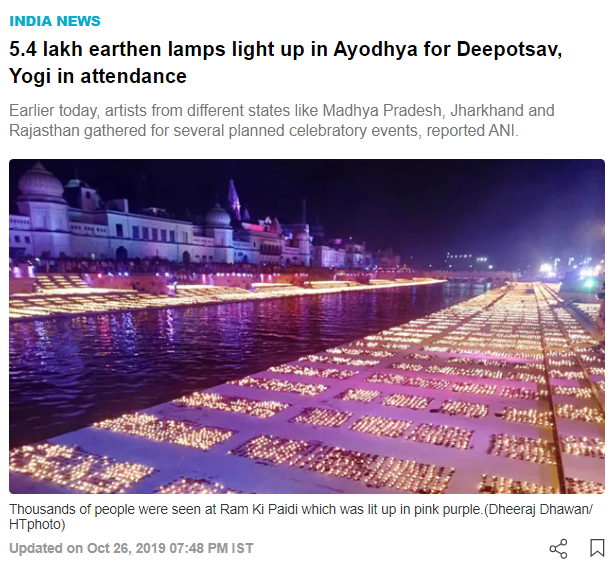 According to the report, “More than 500,000 diyas or earthen lamps were lit at Ram Ki Paidi on the banks of the Saryu River in Uttar Pradesh’s Ayodhya as part of the BJP government’s Deepotsav celebrations.”

Thus, it is evident from the above information that old images showing Diwali celebrations in Ayodhya are being shared as recent. Therefore, the viral claim is misleading.