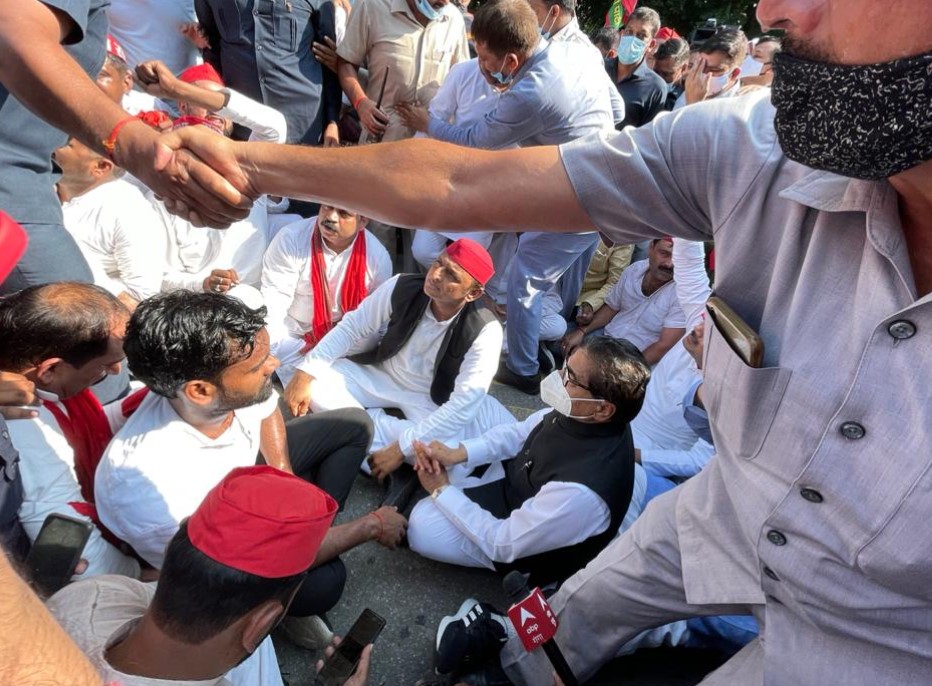 Former Uttar Pradesh Chief Minister and Samajwadi Party chief Akhilesh Yadav, who was staging a protest against the Lakhimpur Kheri violence outside his residence in Lucknow, has been detained by the police.

🔲 #WATCH | Lucknow: Police take Samajwadi Party president #AkhileshYadav into custody outside his residence where he staged a sit-in protest after being stopped from going to #LakhimpurKheri where 8 people died in violence yesterday

Speaking to the media person while protesting outside his residence in Lucknow, Yadav said: “Even Britishers would not have committed the kind of atrocities this government is committing against farmers. MoS Home Ajay Mishra and Deputy CM Keshav Prasad Maurya should resign.”

Earlier, Congress leader Priyanka Gandhi Vadra, who was on her way to Uttar Pradesh Lakhimpur Kheri district to visit the kin of the victims there, was also detained from Hargaon on Monday, claimed the party’s youth wing national president Srinivas BV claimed.

Srinivas, in his tweet in Hindi, said, “Finally that happened, what was expected from BJP. In the democratic country of ‘Mahatma Gandhi’, the worshipers of ‘Godse’ have arrested our leader @priyankagandhi Ji who fought with heavy rains and police force to meet the ‘Annadata’, from Hargaon. This is just the beginning of the fight!! Kisan Ekta Zindabad”.

In a video that he shared along with the tweet, Srinivas has called on all supports to reach the Sitapur police line.

In the unfortunate incident of Lakhimpur, 8 casualties have been reported till now as per the district administration. ADG LO, ACS Agriculture,IG Range & Commissioner are on the spot & situation is under control.Adequate deployment has been done to prevent any untoward incident.

Farmers have submitted a complaint against Union Minister of State for Home Ajay Mishra Teni and his son Ashish Mishra Teni at Tikunia over Lakhimpur Kheri violence on Sunday.

Samyukt Kisan Morcha (SKM) issued a statement regarding the incident claiming the death of four farmers and alleged that one of the four farmers was shot dead by Union Minister of State for Home Ajay Mishra Teni’s son, while the others have been allegedly run over by the vehicles of his convoy.

Meanwhile, refuting SKM’s allegations, MoS Teni said that his son was not present at the spot, adding that some miscreants merged with protesting farmers and pelted the stones on the car which lead to the ‘unfortunate incident’.